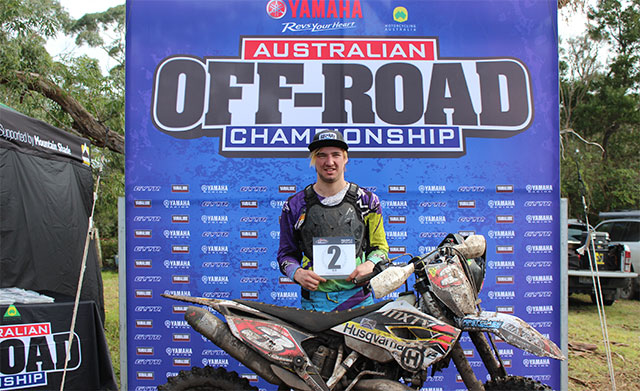 The 2016 Yamaha Australian Off-Road Championship has been nothing short of exciting and challenging for the 2016 Enduro competitors this year, and as they head in to the penultimate weekend of racing in Monkerai, New South Wales August 13-14 for Rounds 9 & 10 there has never been a more crucial moment for these competitors.

Leading in to Rounds 9 & 10 at Monkerai this weekend, we flash back to Rounds 7 & 8 in Hedley in Victoria only a fortnight ago, which marked the beginning to the second stint of the season as well as a stand out performance from Husqvarna Factory supported Lyndon Snodgrass.

Lyndon Snodgrass definitely put his best foot forward at Rounds 7 & 8 of the 2016 Yamaha AORC, wrapping up the weekend with his highest outright finish in the Championship E3 class.

Walking away from his first Cross Country battle for the season with second in his class and in third outright alongside key players in the Championship, KTM Enduro Racing Team‰Ûªs Daniel Sanders and Tye Simmonds.

In what was treacherous conditions in the seaside location, battling the rain, hail, sun, mud and the wind for the first three ‰ÛÒhour Cross Country stint of the 2016 season, Snodgrass proved he couldn‰Ûªt be deterred by the unlawful conditions riding to a smooth finish, crossing the finishing line in bounds of hugs from on lookers and supporters.

Currently competing on a Husqvarna TE300 machine the already water logged course gelled to the riding style of Snodgrass on both Saturday and Sunday as he walked away from the weekend with two back to back podium positions.

In comparison Snodgrass went in to Rounds 1 & 2 at Kilkivan in Queensland with a best finishing place of fifth in his class and 22nd outright for the weekend ‰ÛÒ he finished over four minutes behind front runner KTM Enduro Racing Teams Daniel Sanders at round one, to then finish just over one minute behind again Sanders at round eight a fortnight ago.

With such a dramatic improvement from Snodgrass, Rounds 7 & 8 turned heads, and led to his name being written in to the minds of the competition as someone not to be under estimated.

This weekend will see Snodgrass along with accompanying competitors take to a familiar layout starting with Cross Country on Saturday the 13th of August and Sprints on Sunday the 14th of August.