Lyndon Snodgrass On The Winning Track In 2015 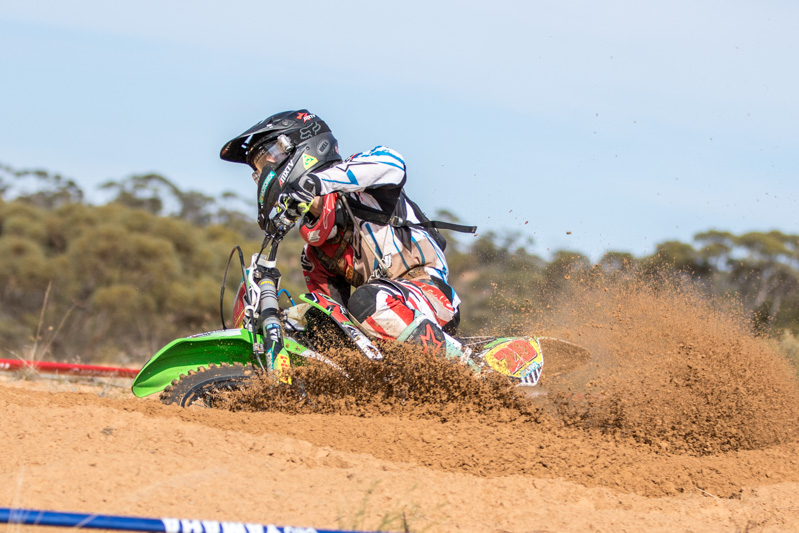 Lyndon Snodgrass his happy with his progress so far in the 2015 Australian Off-Road Championship recording his first round win of 2015 on Sunday.

On the weekend just past, Snodgrass showed he has what it takes to make it as one of Australia's premier Enduro riders showing some great outright speed during rounds five and six of the championship held in Wanbi, South Australia.

Aboard his Hands On Kawasaki Snodgrass ran as high as 9th outright and was leading the under 19s class on Saturday's cross country race, before a mechanical forced him out of the running in the dying stages of the race.

Quickly putting Saturday's bad luck behind him, Snodgrass bounced back on Sunday to claim his class win and now sits third in class in the championship standings.

"I managed to get a mid pack start and on the first few laps I worked my way through the field toåÊget up into 9th outright." Snodgrass explained about Saturdays race. "It was awesome to be up there with Australia's best riders.

"The track was all sand and quite deepåÊfor a lot of it. It cut up pretty rough, but I was having an absolute ball!åÊWith only a lap and a bit to go I was running 1st in class with a comfy 4.5 minute lead, but unfortunately I had aåÊmechanical issue which forced me to DNF.

"Sunday was sprints and I knew I had the speed, it was just a matter of putting someåÊ consistant times down and staying on the bike!åÊI managed to get my KX250F up on the top step of the podium which I was very happy with.

"My KX250F is the only green bike inside the top 20 and it handled absolutely brilliantly all weekend with the Pirelli sand tyre that gave it the drive in the deep sandy conditions.

"I am sitting comfortably in 3rd in the championshipåÊand I will just keep working hard towards the final half of the season.