Luke Clout Breaks Through For Popular Victory at Win Stadium 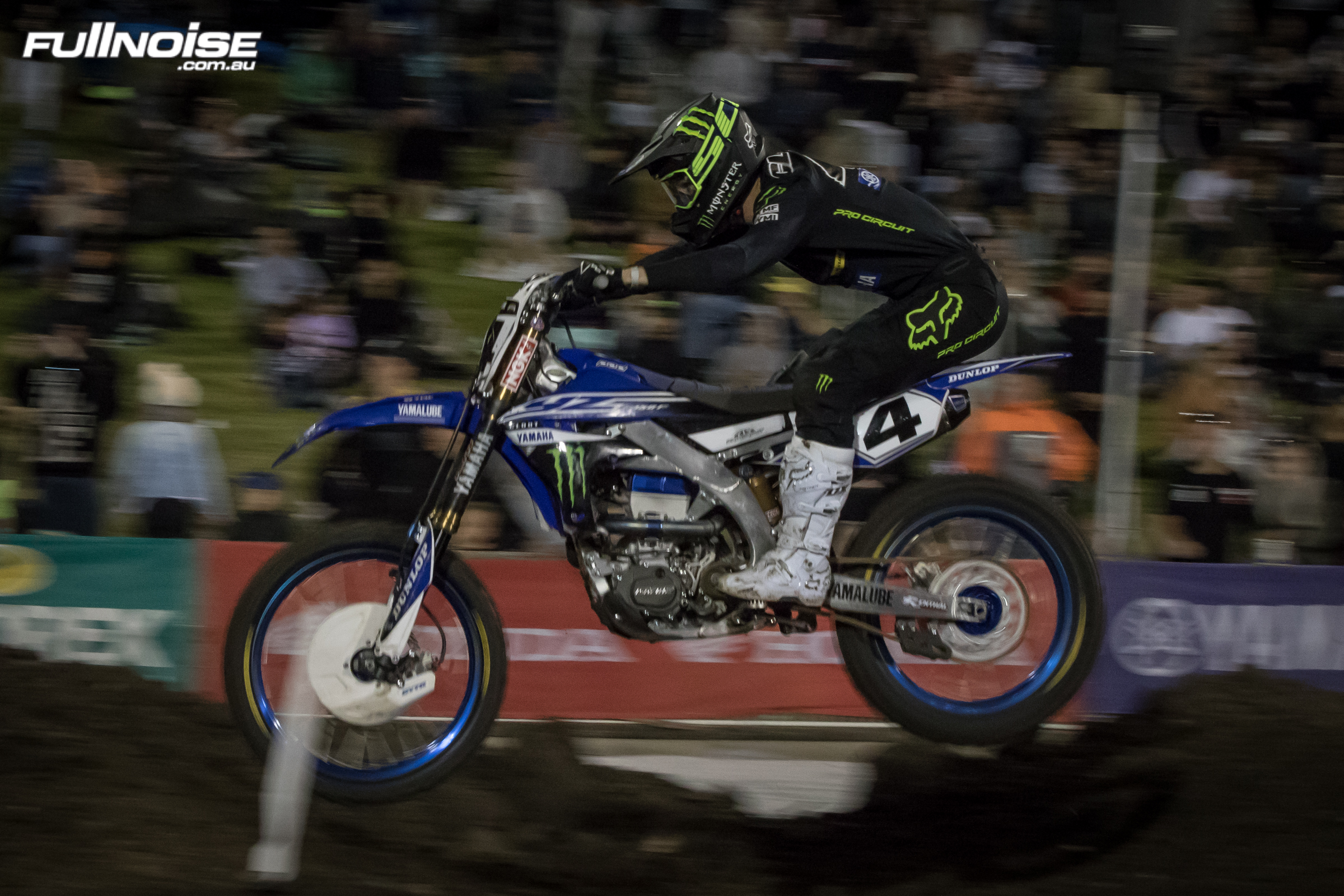 While Clout picked up the win for Australia in the the SX1 class, it was all about the U.S riders in SX2 with Chris Blose leading and all American podium in the 250F division.

It proved to be a tough night for all involved with the track build being delayed due to soil issues that required all the original dirt that was dropped into the stadium being removed and replaced with fresh dirt.

The team at ProTraxx Australia worked right through the night and all the way through to early afternoon to produce a quality track for the rides to race, with the layout providing for some fast, close racing producing tight finishes in both classes and in the process tightened up the points race in both the SX1 and SX2 classes heading into the final two big rounds in Auckland and Melbourne. 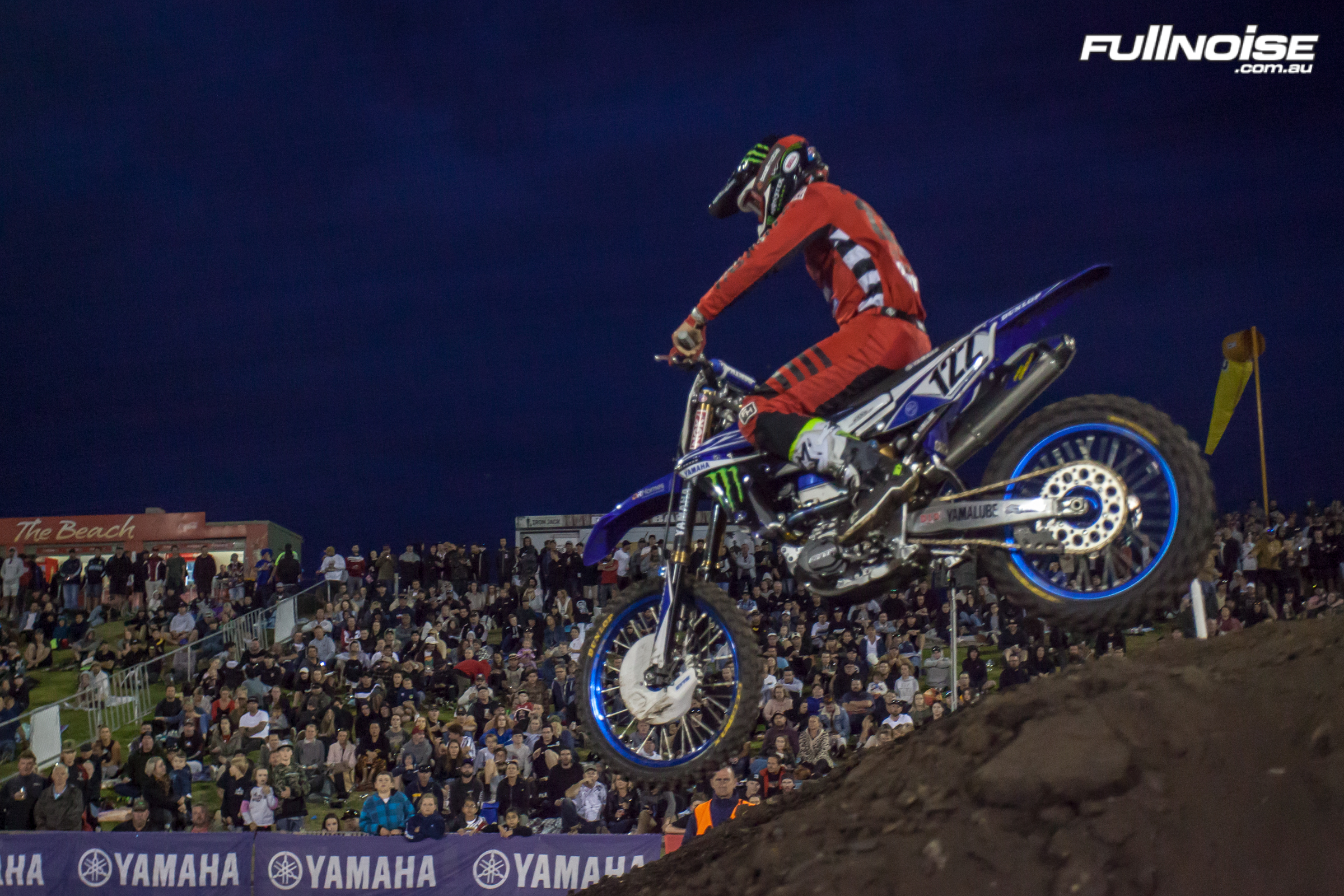 Dan Readon kept his championship hopes alive with a second place result for the round - Credit: Aaryn Minerds
SX1

Championship leader Justin Brayton had to overcome a fast-starting SB Motosport backed Cody Dyce in SX1 heat two with the Suzuki mounted young Victorian showing the American the way around for the opening two laps. Once into the lead, the Penrite Factory Honda Racing rider went on to log a two second win over CDR Yamaha Monster Energy‰Ûªs Luke Clout who was never out of the top three. Brayton‰Ûªs team-mate Brett Metcalfe charged back from sixth at the start to claim the final podium position. American Henry Miller was fourth while Dyce hung on for fifth.

Lawson Bopping won the LCQ to make the nights main events along with Veteran Victorian Justin Carafa. After notching up one of his best rides at round two, Yamalube Yamaha Racing‰Ûªs Richie Evans did it the hard way by coming from way back in the four lap dash to claim third and go through to the main with Jamie Harvey who was fourth. 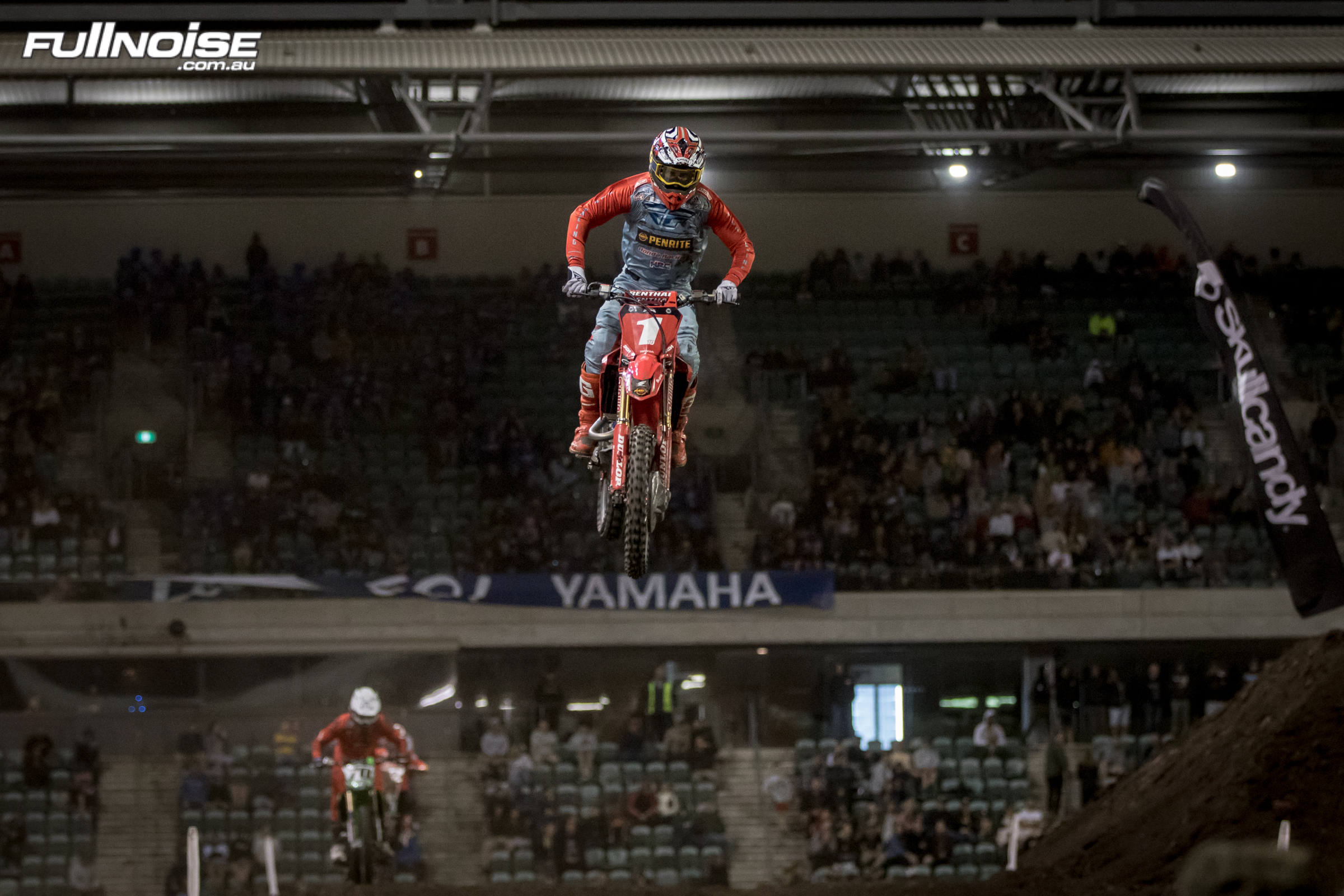 Justin Brayton maintains his championship lead, though it is now just 5 points heading into he final two rounds - Credit: Aaryn Minerds
Brayton set about retaining his championship lead from the front with a strong win in the first of the three SX1 Triple Crown races. Brayton lead all eight laps crossing the line almost three seconds ahead of SuperPole winner Luke Clout. Clout had to overcome Daniel Reardon who ran second for the first half of the race. Reardon held off a hard-charging Brett Metcalfe for third while Metcalfe held of an even harder charging Josh Hill for fourth. Hill had to come from mid pack but clocked the fastest lap (40.072) of the race as he threaded through the field to claim fifth.

It was Luke Clout‰Ûªs turn to dominate as moto two left the gate with the championship contender leading every lap on his way to a commanding seven second win. Reardon crossed the line second after Hill, who had been running second made a mistake. Cody Dyce had his best finish of the season crossing the line third ahead of race one winner Justin Brayton. Brayton had to charge back from tenth place. Hill, after being in the mix for the win eventually crossed the line in fifth while Metcalfe was sixth.

The final moto of the night saw Clout repeat his dominance of race two with his second gate to flag victory. Reardon and Hill followed him home for the duration takin second and third respectively for a Yamaha sweep. Opening race winner Brayton could only manage fourth ahead of Todd Waters who had his highest finish of the night in fourth.

In the end it was Clout who broke through for his maiden Australian Supercross Championship round win, proving to be a very popular winning in front of a huge contingent of family and friends who were in attendance for his home race.

Reardon claimed the second spot on the podium as both CDR Yamaha riders closed in a little on Justin Brayton's championship with the American rounding out the podium for the evening, just ahead of HIll in fourth with Metcalfe in 5th.

Much like the opening round in Brisbane, Dylan Long quietly went about his business to finish in 6th position, ahead of Dyce who's 3rd spot in the second final helped him to a fantastic 7th place finish for the round, just one point ahead of Bopping in 8th, with Todd Waters in 9th and Raceline KTM's new American import Henry Miller rounding out the top ten. 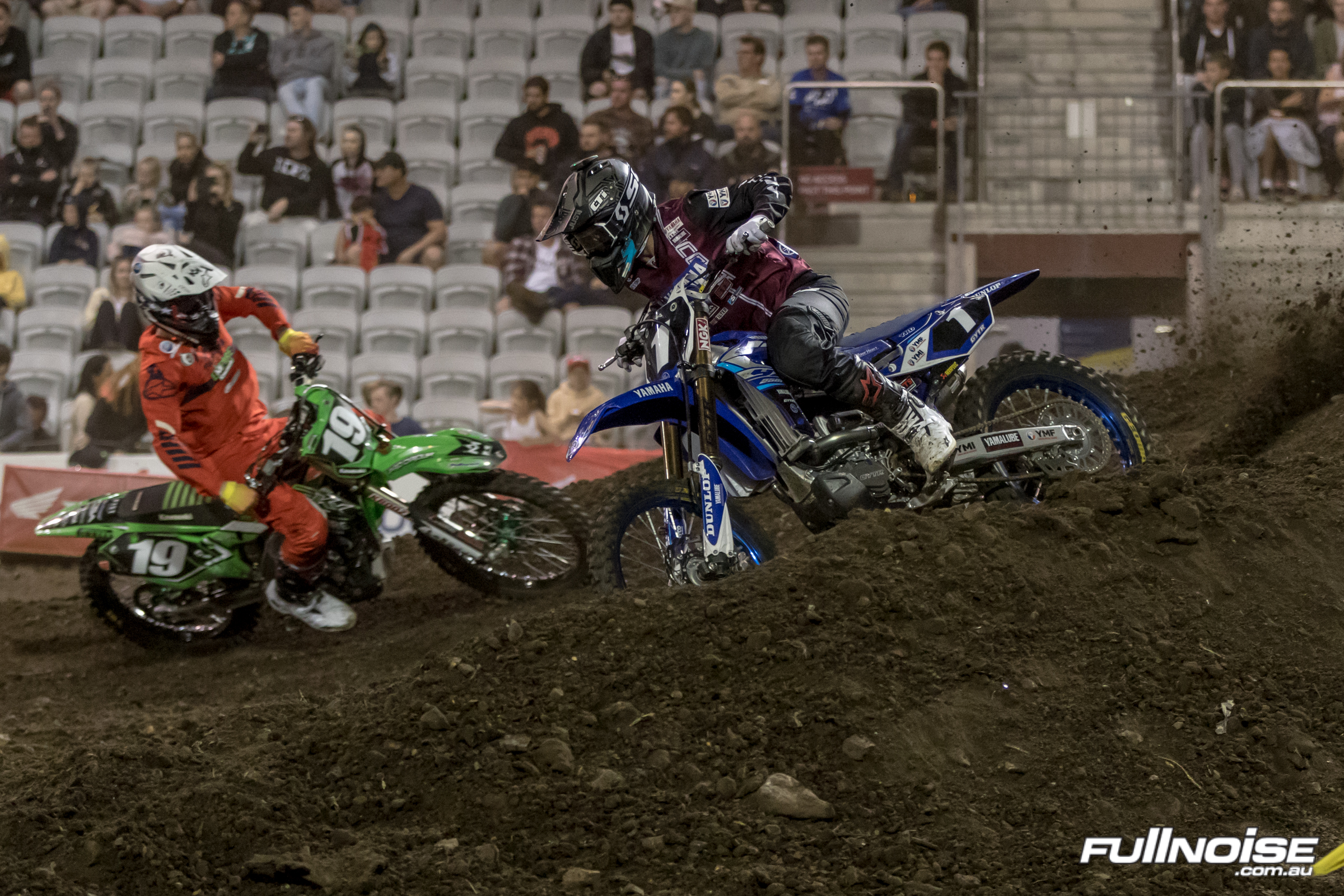 Jay WIlson won both his heat race and the first final, but had to settle for 6th overall for the round - Credit: Aaryn Minerds
SX2


Heat one of the SX2 class saw Yamalube Yamaha Racing‰Ûªs Jay Wilson take a gate to flag win ahead of Penrite Pirelli CRF Honda Racing‰Ûªs Kyle Webster who was back on track after missing round two with injury. SX2 Championship leader Aaron Tanti displaced a fast-starting Jayce Cosford to move into third on the second lap, a position he would hold until the flag. After clawing his way through the field Penrite Factory Honda Racing Team‰Ûªs Mitchell Oldenburg, who dropped the fastest lap of 41.539, was fourth ahead of Mat Mladin Racing‰Ûªs Kaleb Barham.

As was the case in heat one it was another wire to wire win, this time it was Penrite Factory Honda Racing Team‰Ûªs Chris Blose lead from start to finish to lead home an American podium sweep with Josh Osby and Bradley Taft in second and third. Taft held second for the first half of the six lap journey, but Osby was persistent and got the job done. Ricky Latimer was the first Aussie home a distant twenty-one seconds adrift of Taft in fourth. Osby clocked the fastest lap of 41.589 in his pursuit of Blose. Serco Yamaha‰Ûªs Josh Hayes crashed out in the second corner and would not take any further part in the nights racing. 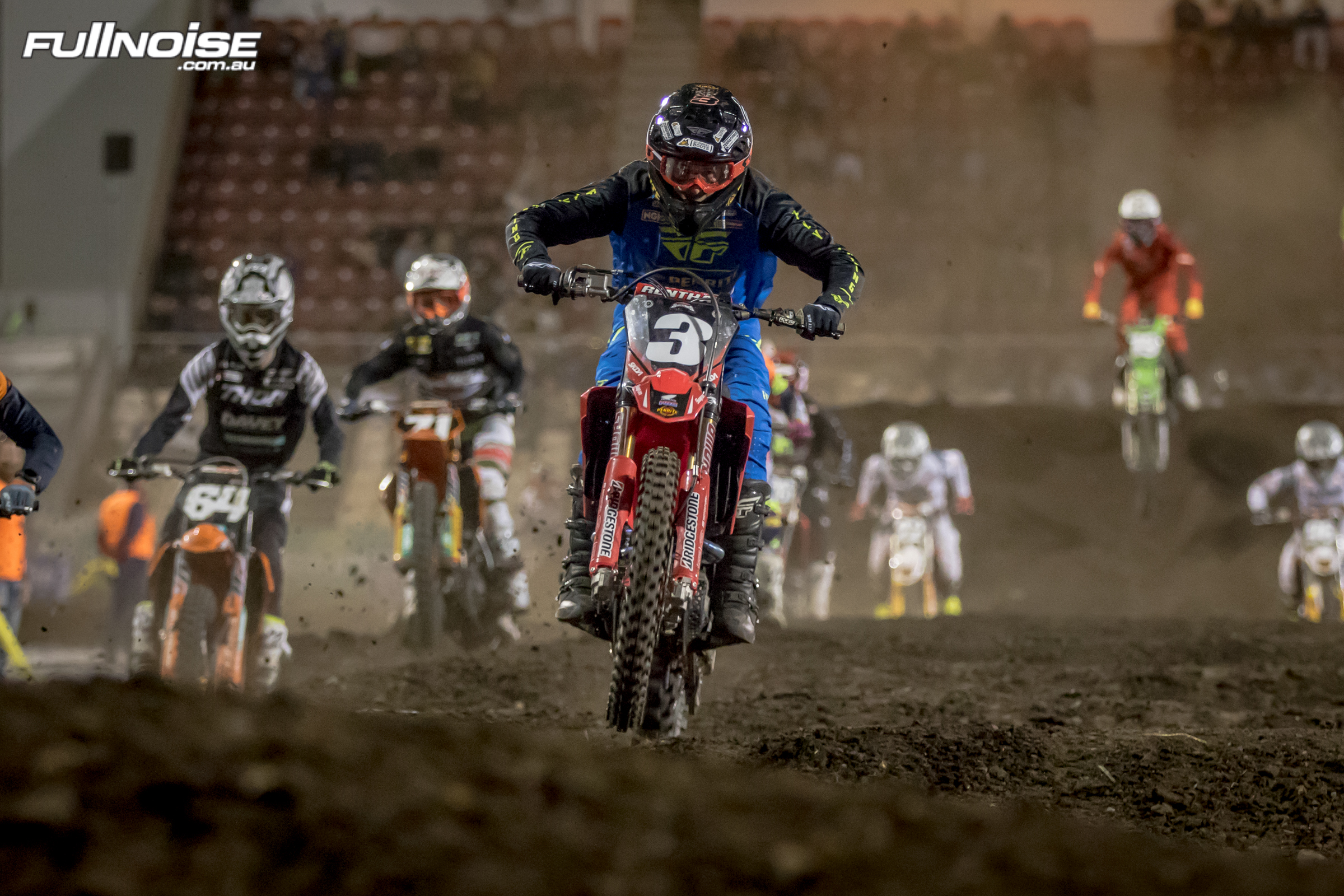 With three consistent final races, Blose walked away from the night with the SX2 round win - Credit Aaryn Minerds
Rhys Budd took a gate to flag win in the SX2 LCQ ahead of Morgan Fogarty and Jayce Cosford who ran second and third for the four laps. McKenzie O‰ÛªBree was the final rider to make it through with fourth.

Race one of the three, seven lap races, for the SX2 Triple crown saw Jay Wilson take the win after leading every lap. Bradley Taft finished a second and a half back with Chris Blose a further second back. Championship leader Aaron Tanti was fourth. Josh Osby ran third in the early laps, but a mistake saw him have to claw back to fifth, one spot behind compatriot Mitchell Oldenburg in fourth.

Blose led home an American trifecta in moto two with the Oldenburg and Osby following their compatriot to the chequered flag. Tanti ran third for the opening laps before crossing the line fifth. Oldenburg took second from Osby mid race, and that‰Ûªs where they remained. Race one winner Jay Wilson opened the moto in fourth and worked his way into fourth before the flag to still stay in the hunt for an overall.

The final moto of the SX2 class saw a few spanners thrown in the works! Connor Tierney came from nowhere in the previous two motos to lead every lap and take a resounding win. Osby was second ahead of fast learning Regan Duffy, as the young West Australian claimed third; his best result so far in just his first season of Supercross racing. Blose, who had been running second until a few laps from home finished fourth ahead of Dylan Wills and Kyle Webster. One of the leading contenders for the night Jay Wilson finished second last while championship leader Aaron Tanti could only manage ninth. 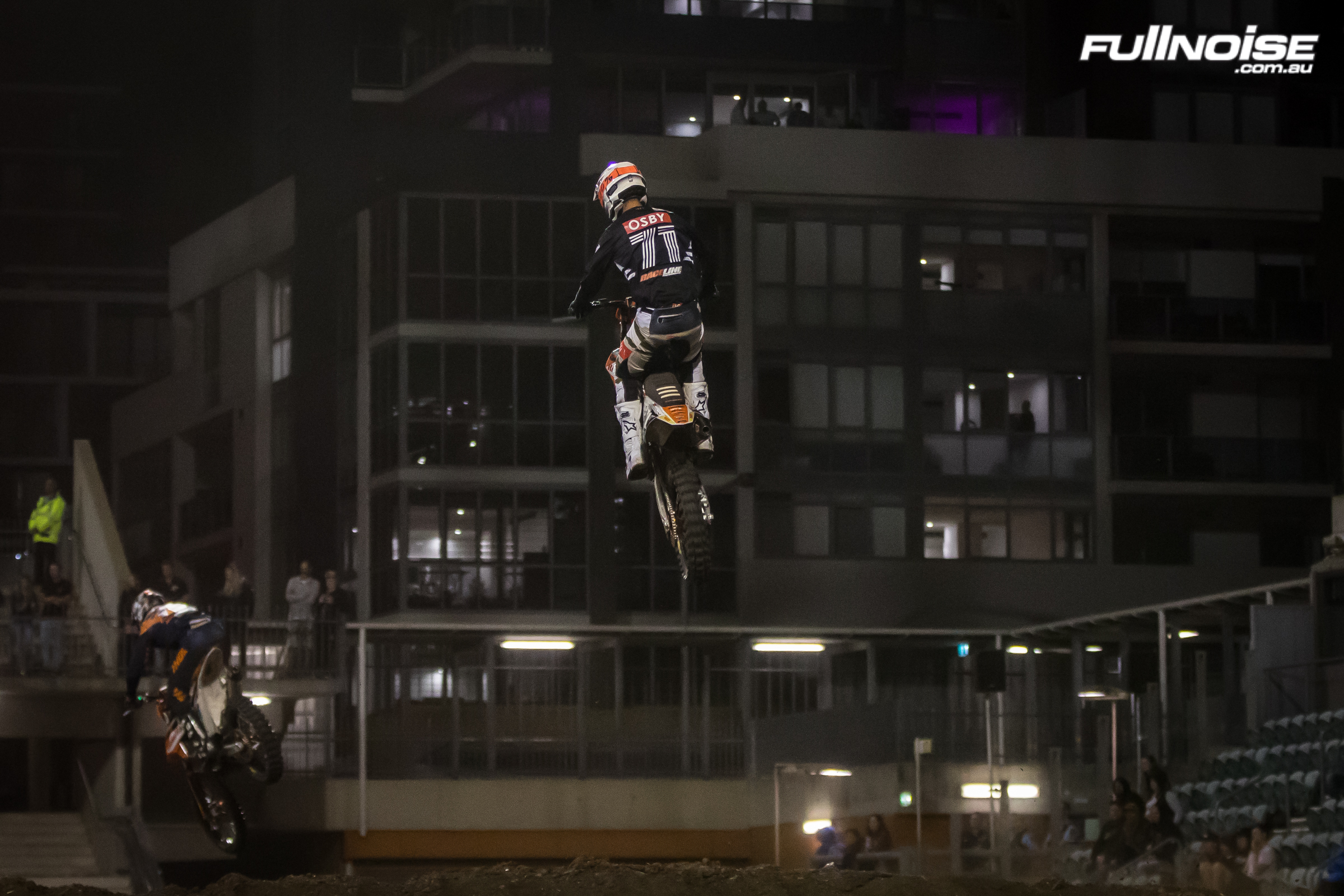 Joshua Osby has taken over the SX2 points lead with the top four separated by just four points - Credit: Aaryn MInerds
In the wash it was Blose who came out on top with his three consistent riders proving the difference taking the round win ahead of Osby and Oldenburg.

Tanti rebounded from his small mistake to finish just off the podium in 4th, while Wills was impressive on his way to finishing 5th overall four the round, his best result so far of the championship.

Highlighting just how close the racing was for the eveing, Wilson had to settle for 6th position for the night, ahead of Tierney in 7th despite both riders claiming a win in the finals, as positions 5th through to 10th were only seperated by just 4 points after the three final format.

The SX2 championship heads into the final two rounds with the top four riders seperated by just four points, with Josh Osby becoming the third riders to hold the red plate this series with his second place finish tonight.

The KTM backed racer holds a single point lead over Blose, with Tanti a further point behind in third sport, while Oldenburg holds on to 4th, just four points behind points leader Osby. 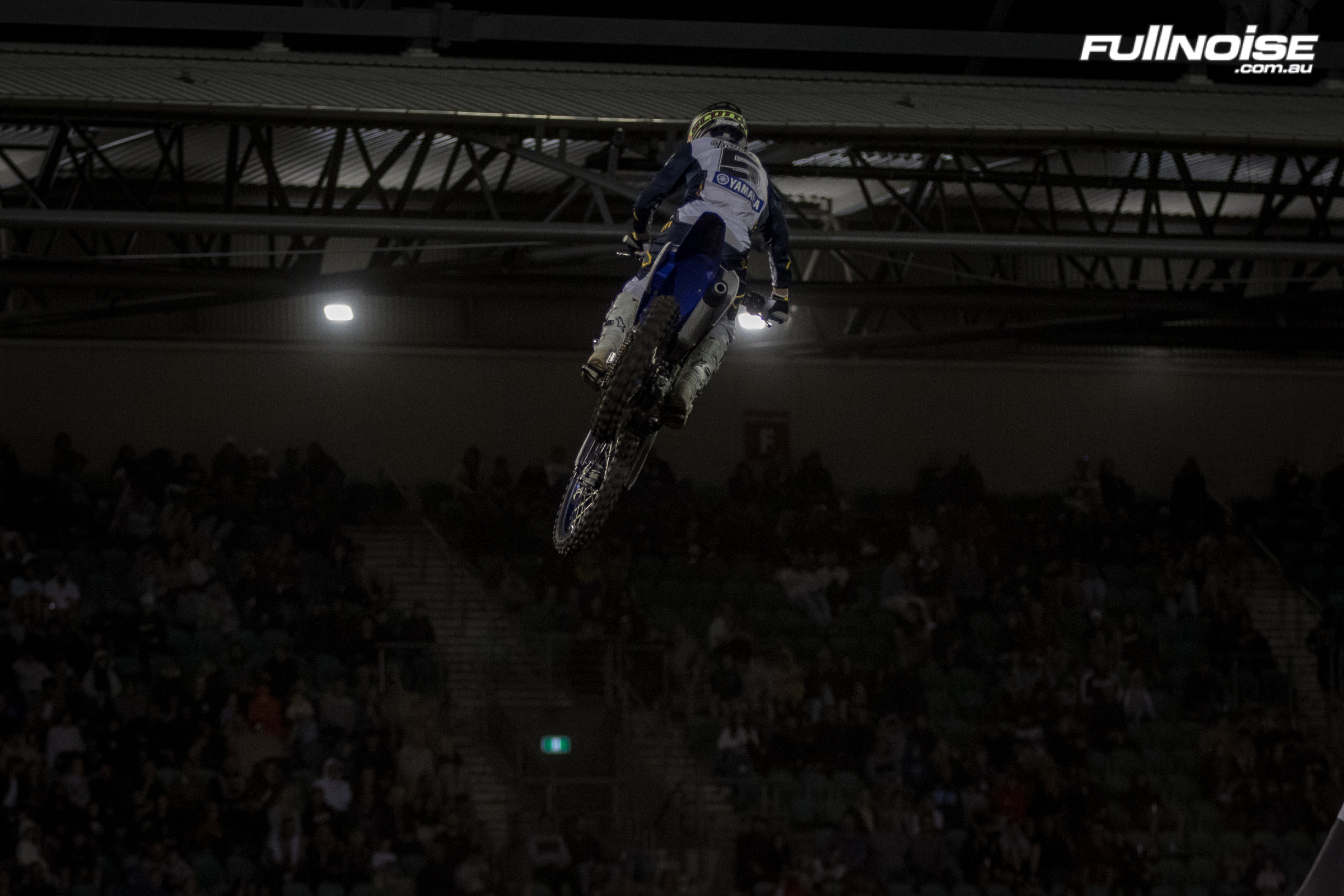 
South Australian Alex Larwood dominated the seven lap Junior Lites final, leading every lap on his way to a seventeen second win. Cameron Steel looked good in the early laps running second but eventually crossed the line fifth; Brock Deveson was second across the line after moving up one spot from his first lap position. Ryan Alexanderson followed Deveson all the way home to claim third. Jake Kowal had a good ride through the midfield to take fourth ahead of Steel. 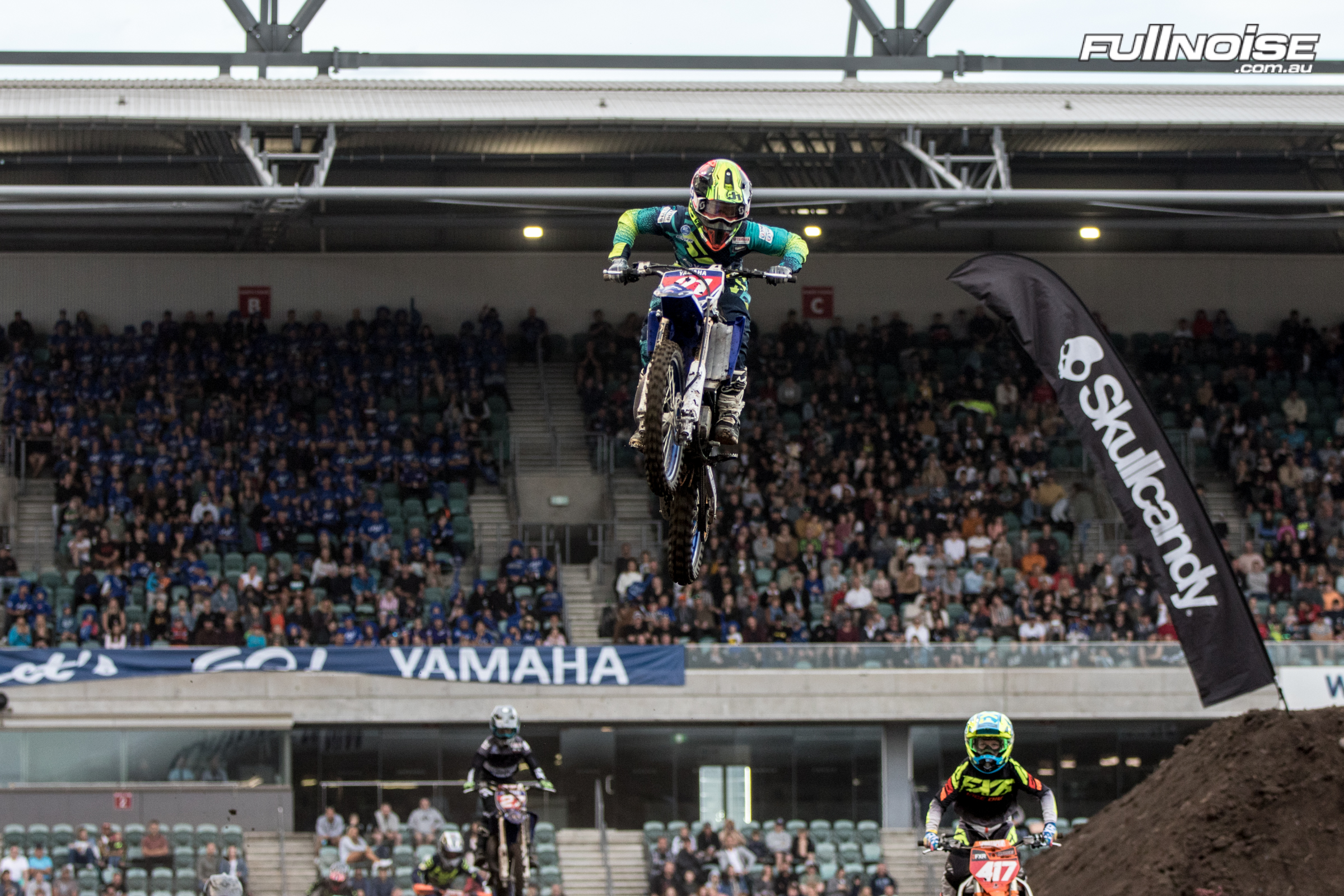 
GYTR Yamaha Junior Racing‰Ûªs Ryder Kingsford overcame lap one leader Tyler Collins to head the seven lap Junior 85/150 final after each lap and go on to clock up a six second win over Byron Dennis. Dennis was solid and completed the distance in that position with few challenges. Tasmanian Jett Alsop came back from sixth in the early running to snare the final podium position. Lap one leader Tyler Collins lost fourth in a close final lap battle with Yamaha Australia‰Ûªs Seth Burchell.

Round four of the championship now head to New Zealand for the Monster Energy S-X Open Auckland which promises to be the biggest dirt bike racing event in New Zealand history with Supercross, Freestyle Motocross and non-stop entertainment all inside Auckland‰Ûªs Mt Smart Stadium on November 16! 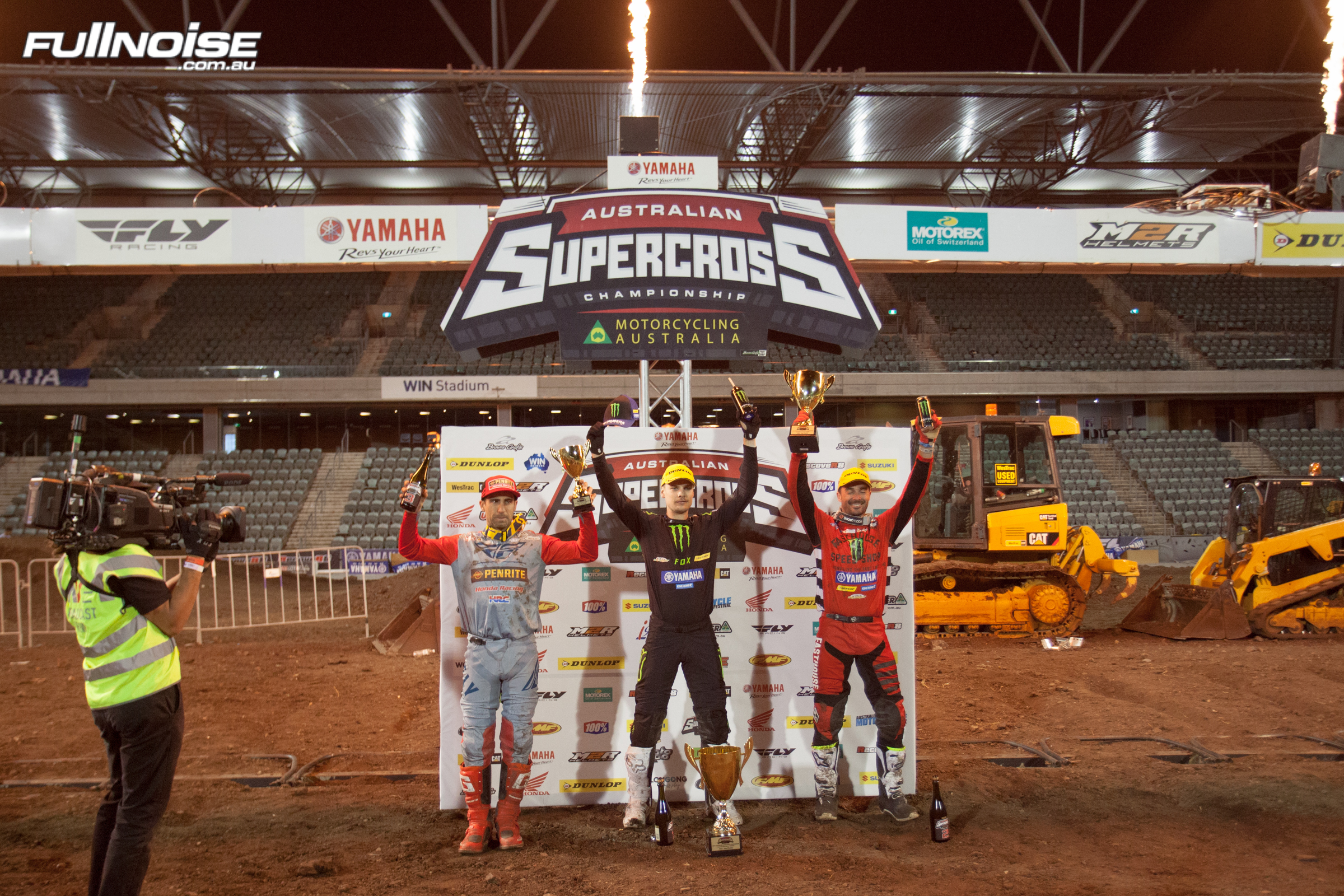 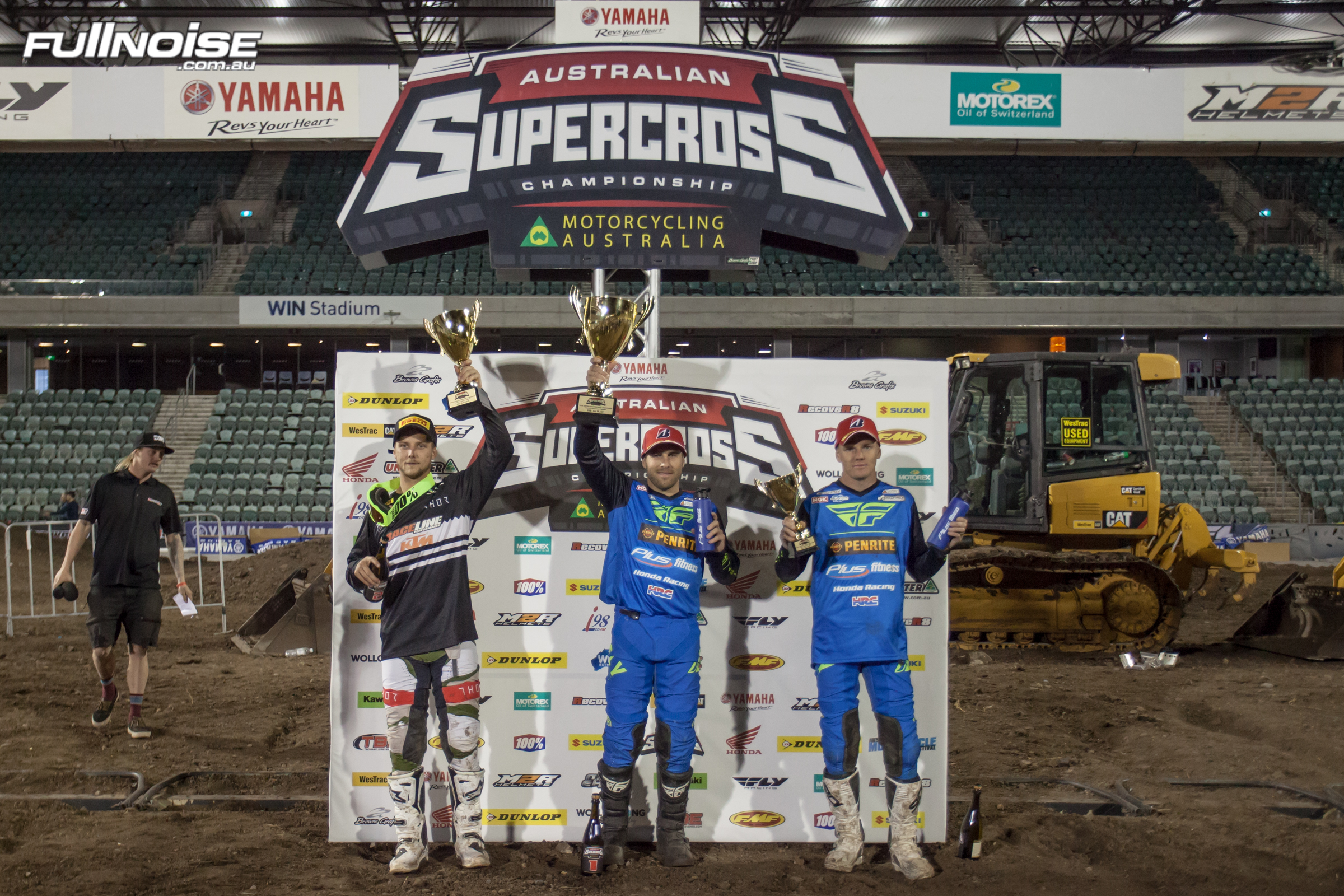