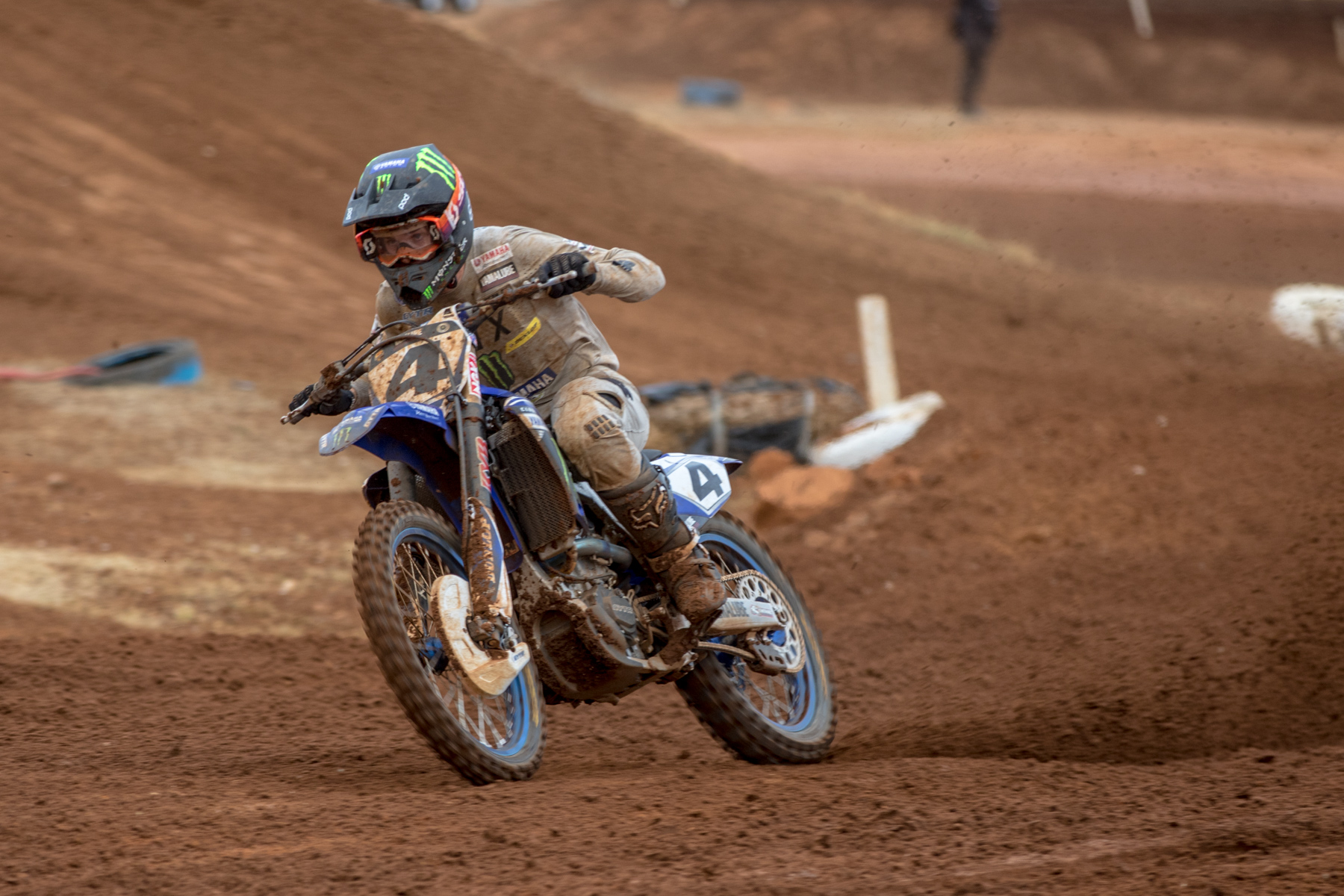 CDR Yamaha's Luke Clout and Penrite Honda CRF Racing's Kyle Webster have raced to Victory at the conclusion of some exciting MX1 and MX2 racing at the 7th round of the 2019 Pirelli MX Nationals held at Maitland in NSW today.

MX1
Privateer Zak Small edged out Brett Metcalfe as the surprise holeshot winner as the first of the two back to back MX1 motos left the gate for the eight-lap journey. It only took three corners for Monster Energy CDR Yamaha's Luke Clout to assume the lead ahead of teammate Kirk Gibbs and Metcalfe while championship leader Todd Waters was back in thirteenth after hitting the start gate and contender Hayden Mellross back in eighth.

After taking the lead early on Clout checked out as teammate Gibbs demoted Metcalfe to third. KSF Suzuki's Jayden Rykers was having one of his best motos as he worked hard to hold off a charging Mellross for fourth. Waters was also on a charge and had moved up to eighth and was working on top privateer Jesse Dobson by the halfway mark.

By the chequered flag, it was a CDR 1-2 with Clout and Gibbs first and second while Penrite Honda's Metcalfe rounded out the top three. Mellross eventually got past Rykers for fourth while Waters rebounded back to sixth.

After a five-minute rest, moto two blasted out of the gate once again with Metcalfe taking a clear holeshot. Dylan Long took the early lead with Metcalfe and race one winner Clout in tow. Mellross had a better start and ran fourth as did Waters who was sixth.

By lap five of the eight Clout had found his way to the front with some blazing corner speed as Metcalfe, Long and Mellross were left to fight for the podium positions. A further seven seconds back Gibbs, Rykers and Waters were involved in their own battle.

While Metcalfe made a spirited challenge in the final laps Clout went on to win for back-to-back wins for a perfect start to the round. Mellross moved into third while Long held on for fourth ahead of Gibbs and Waters.

With the points tallied up for the two motos, Clout was the obvious winner ahead at the conclusion of the back to back moto's.

In the final 30 minute moto for the MX1 class, it was Gibbs who took control of the race lead early with Metcalfe, Mellross leading the charge to hunt him down, while moto 1 race winner Clout had some work to do starting just inside the top ten.

Mellross pushed hard early and made his way around Metcalfe for second, before a fast charging Clout worked his way through to third before taking advantage of a downed lapped rider to make a move into second postion ahead of Mellross.

Unfortunatley for Honda's Metcalfe a mistake seen him fall thought he pack, eventually finishing back in 11th place.

Back out front both Clout and Mellross closed the gap on race leader Gibbs in the closing stages of the race, however it was not enough, with Gibbs crossing the line in first position.

It proved to be an exceptional day for the CDR Yamaha team, with Clout taking the round win ahead of Gibbs after the pair split race wins, with Mellross rounding out the podium, while championship leader heading into the round Todd Waters had to settle for a fourth place finish for the round, seeingh him slip back to third in the points standings.

Clout with his round win, re-claimed the championship leaders red plate and now holds a slender nine point lead over Mellross heading into round 8 in Moree, with Waters a futher three points further behind.

MX2
The opening MX2 moto saw Bailey Malkiewicz and Cooper Pozniak fight for the holeshot with Malkiewicz earning the $100. Luke Reardon soon assumed the lead while Aaron Tanti and Wilson Todd were the first of the heavy championship contenders as Malkiewicz and a fast-starting Luke Reardon the squabbled over the early lead.

By lap two Malkiewicz held the lead, but Wilson Todd was on a charge and had moved into second while Crawford, Webster moved into the top ten after lacklustre starts. Sadly Luke Reardon had a big crash after becoming cross rutted at high speed and dropped out of the equation.

With twelve minutes down, all the heavy hitters had worked their way to the front and were nose to tail. Malkiewicz was the first to falter going down, throwing away his lead and handing it to teammate Wilson Todd. Todd then lead Tanti, Wilson, Crawford, and Webster.

Crawford then found a burst of speed and passed both Jay Wilson and Aaron Tanti to move into second while an unfortunate Malkiewicz crashed once again while being lapped.

With seven laps to go Crawford then put the pressure on Wilson Todd for the lead before taking the spot. With another lap down it was Kyle Webster who was on the move, dropping the fastest lap and demoting Wilson Todd and Tanti as moved into second and set his focus on leader Nathan Crawford who was five seconds ahead.

In the end, Wester couldn't bridge the gap as Crawford ran out the winner. Webster was second ahead of Jay Wilson and Wilson Todd and Aaron Tanti.

Moto two of the MX2 class saw Cooper Pozniak with the holeshot, but it was quickly Wilson Todd and Webster and Crawford who assumed the front running, that was until Todd high-sided in a rut and crashed before the conclusion of the opening lap. Webster assumed the lead and the rest of the field had a job ahead of them. Serco teammates Crawford and Tanti then ran second and third with Bailey Malkiewicz and Jay Wilson on their tale.

From there the rest of the moto was a bit of a precession with the front running order remaining mostly unchanged, the exception being Malkiewicz dropping to fifth. Webster was untouchable out front and went on to win the moto and take the days overall. Crawford finished second to claim second overall for the round while Aaron Tanti rounded out the podium with third. Wilson Todd rebounded to sixth to limit some of the damage.

Overall for the round Webster, Crawford and Jay Wilson grabbing the final podium spot.

Webster's round win helped him close to with in ten points of MX2 championship leader Wilson Todd who finished the round in 5th place, allowing Jay Wilson also to close back in to 20 points of the championship lead, setting the tone for a close fight for the MX2 title with just three rounds remaining.

MXD
Victorian Mason Semmens was the clear holeshot winner as the Motul MXD class blasted out of the gate for moto one. Noah Ferguson lead Jai Walker, Rhys Budd, Max Purvis and Jack Kukas as the young guns squabbled for position early on.

At the end of the opening lap, the running order had settled with Ferguson, Semmens, Rhys Budd and Max Purvis setting the pace in that order, while championship leader Regan Duffy was back in seventh. Purvis dropped back after a mistake and was left to fight main title rival Duffy for sixth.

Duffy soon put on a charge to the front of the race dropping the fastest lap as he charged through the field and was up to third with four laps to go. After a lap long bar to bar battel with Semmens Duffy claimed second with Ferguson the only target left. Duffy was on his A game though and with three laps to go was into the lead and set sail for the flag. Despite a last corner challenge from Ferguson, Duffy claimed the win ahead of Ferguson and Semmens.

With main championship rival Max Purvis unable to get a rhythm and finishing fifth, after a small crash in the last lap, the win was a points gainer in the championship points race for the Duffy.

It was once again Duffy who came through for the win in the second moto, taking the race vitory ahead of Purvis and Semmens, with Budd taking fourth place ahead of Ferguson in 5th.

Duffy now holds a commanding 29 point lead over Purvis in the championship standings, with Budd a further 48 points behind in third position.