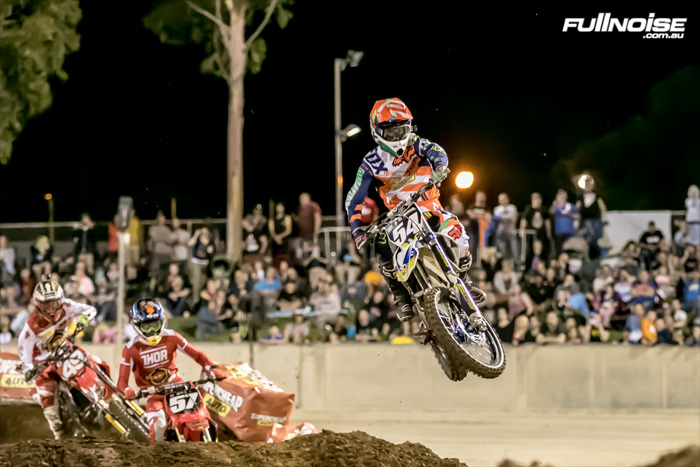 SD3 Husqvarna racer Luke Arbon‰Ûªs exciting 2015 season has drawn to a close with the South Australian rider sustaining a broken ankle at the fifth round of the Australian Supercross championship in Sydney.

The Husqvarna FC 250 rider, who shared second place in the SX2 championship entering the round, had an awkward fall in a triple/tabletop combination section during qualifying and dabbed a foot in at an awkward angle, causing the bone to break.

X-rays confirmed the fracture, however CT scans are required today or tomorrow in order to understand the extent of the injury and possible recovery projections.

The injury ends season 2015 end a week earlier for the resident of Gawler, SA, who established himself as one of the rising stars of the sport in 2014 off the back of a swashbuckling mid-season MX Nationals win streak when he took wins in six consecutive MX2 rounds and finished third overall.

‰ÛÏMy ankle is broken on the inside, we‰Ûªre just not sure how bad or good everything is yet." Arbon confirmed. "We'll have a much clearer picture today or tomorrow after CT scans.

"I think it‰Ûªs similar to what I've done a few years back, so maybe it will be good to go in six weeks. The obstacle had a triple on and off and as I‰Ûªve seat-bounced it and hit it with a bit of pace, I bottomed the shock which kicked me forward and dropped the front end down. I was trying to bring it back, but I've come up a little bit short and clipped the end of the tabletop.

"That sent me off a bit dodgy and I went to the right a bit - it could have been a lot bigger - but as I have gone to the right I've put my foot out and stabbed into the upramp.

The SD3 Husqvarna rider was expected to fight for top honours in this year's motocross championship but a chronic fatigue condition known as ‰ÛÏLeaky Gut Syndrome", prevented the 22-year-old from gaining any momentum, until it was treated and cured.

The last two months have seen Arbon return to rich form, with a podium finish in the high-profile Mountain Man Motocross in Toowoomba, and two podium finishes in the Australian Supercross Championship earning him a share of second overall coming into the weekend's penultimate round.

"It's devastating for my supercross season to come to an end prematurely, I definitely felt like I was back to myself and was having fun riding up the front again. It was awesome to get two podiums and be second in the points coming into this round.

"It was also a big thing for me to show myself that the fatigue issue was history. When you've got something holding you back for so long, it begins to kick in a little bit in the back of your mind, so it was good to be back to full fitness.

"I can take a lot of confidence from everything that happened in the supercross championship.‰Û