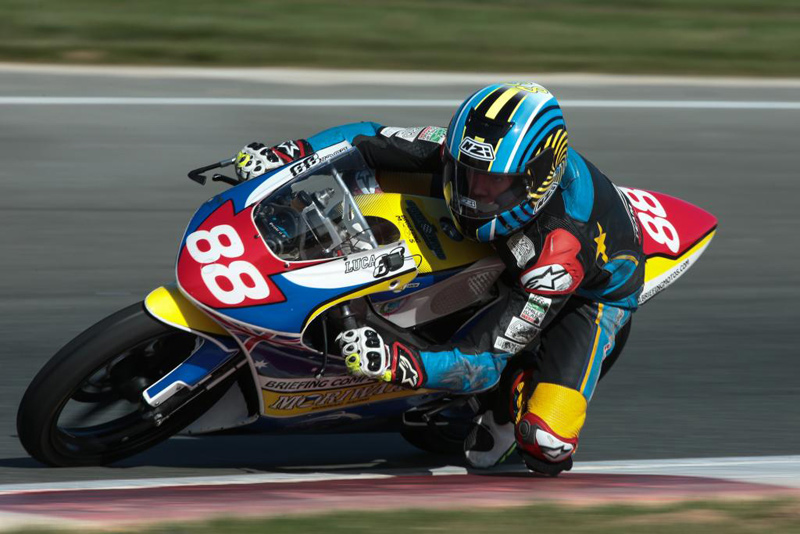 Young gun Aussie Luca Gardner has finished his final round of the Copa Espana CEV Pre GP Moto3 series in Spain and is already getting stuck into some motocross training in preparation for the 2015 season!

Pre GP machines are limited to 37hp, with a more basic chassis than a GP bike.

Luca had a great learning season after stepping up from the CMV series and plans on taking his experiences from this year into the 2015 season.

Luca Gardner, "The Copa Espana was a big step up from the CMV Series. There are a lot more riders who are competitive, with a lot of teams spending more money on the machines than in the CMV Series. It's a fast, competitive championship.

"I've enjoyed the racing. It has been an up and down season but a good learning year." Gardner explained. "We had some machine failures, unfortunately at most rounds we had problems aside from the final round last weekend.

"This meant I unfortunately missed quite a lot of practice sessions and even qualifying, which did make learning new tracks difficult. Luckily I'm a fast learner I guess!

"My bike's four-years-old and I'm competing against the latest equipment, so it can be tough at times!

"I've still had lots of great races though. I'm looking forward to being on more competitive machinery in 2015 and showing what I am capable of. I love racing and I love bikes"!

The final round of the series was last weekend at Navarro and Luca had his best meeting of the season.

"Last weekend was great." Gardner continued. "I had an up and down Friday practice day and made quite a few mistakes but it all worked out on Saturday and I qualified 17th out of 29 riders. I was happy with that and felt I could do even better in the race on Sunday.

"I had a clutch drama on the start line, so I was only 22nd into turn one but I just went flat out and put my head down. I passed heaps of riders and got to the front group. I sat with the front group until the final lap, got a good run onto the straight and managed to pass two more riders to take 13th.

"It was a tough and really tight race so I was happy to make up 10 positions after such a bad start," he concluded.

Luca will now spend the Christmas break chasing his big brother around on motocross bikes and surfing to stay fit for the 2015 season. Keep an eye out for this future champion who looks to be following in the footsteps of his World Champion father Wayne Gardner and his brother, World Moto3 GP rider and Repsol CEV competitor Remy.