Luc Ackermann Front and Double Flips to Victory in Berlin 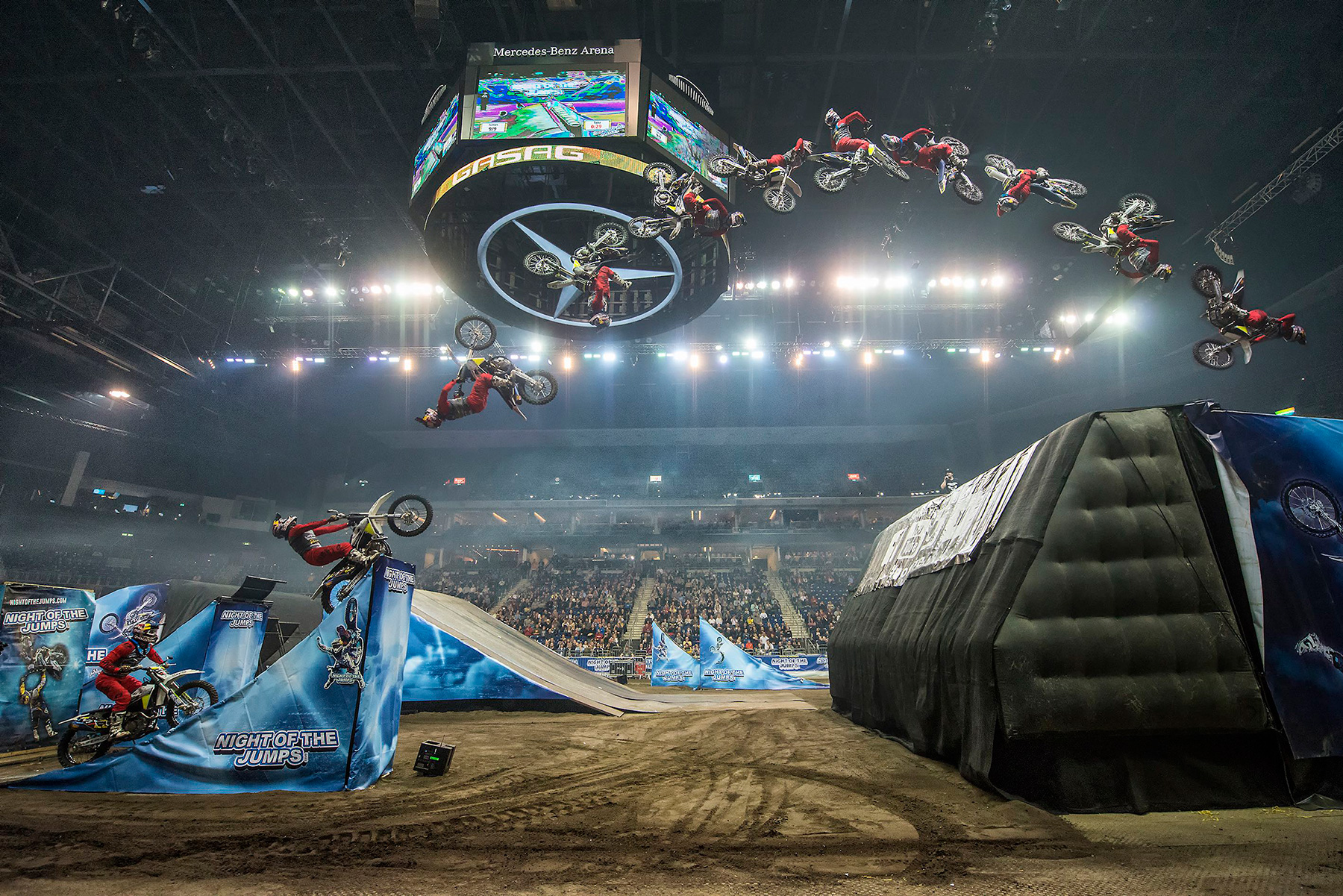 Round one winner Luc Ackermann.
On Friday night, NIGHT of the JUMPs entered a new stage of Freestyle Motocross competition inside the Mercedes-Benz Arena, Berlin, with 11 of the world‰Ûªs best Freestyle Motocross riders from three continents to kick off the FIM Freestyle MX World Championship.

Three World Champions were welcomed into the cauldron of Berlin with the reigning World Champion, Maikel Melero (ESP, 2014-2018), Libor Podmol (CZE, 2010) and Javier Villegas (CHL, 2011). The runner-up World Champion and European Champion from 2018, Luc Ackermann was also invited to the party. Two Australians, and champions in their own right, Pat Bowden and Rob Adelberg, current winners of the Nitro World Games and X Games (Winter) respectively, were ready to bring fireworks to the German capital.


While the 2011 Chilean World Champion failed to reach the final, even after crashing the first Egg Roll Superman in NIGHT of the JUMPs competition, the other two FIM World Champions, Libor Podmol and Maikel Melero battled in the finals. Their positions were secured alongside the Italian, Leonardo Fini, who scored a lot of points with his new Egg Roll Nac Nac and California Roll. Only just in front of the current Winter X Games winner Rob Adelberg, who didn‰Ûªt unleash his biggest tricks but found enough energy to make it into the Top 6. Rob‰Ûªs compatriot, Pat Bowden already secured his spot with the look-back Double Hart Attack backflip and One-Hand to Double Hart Backflip. 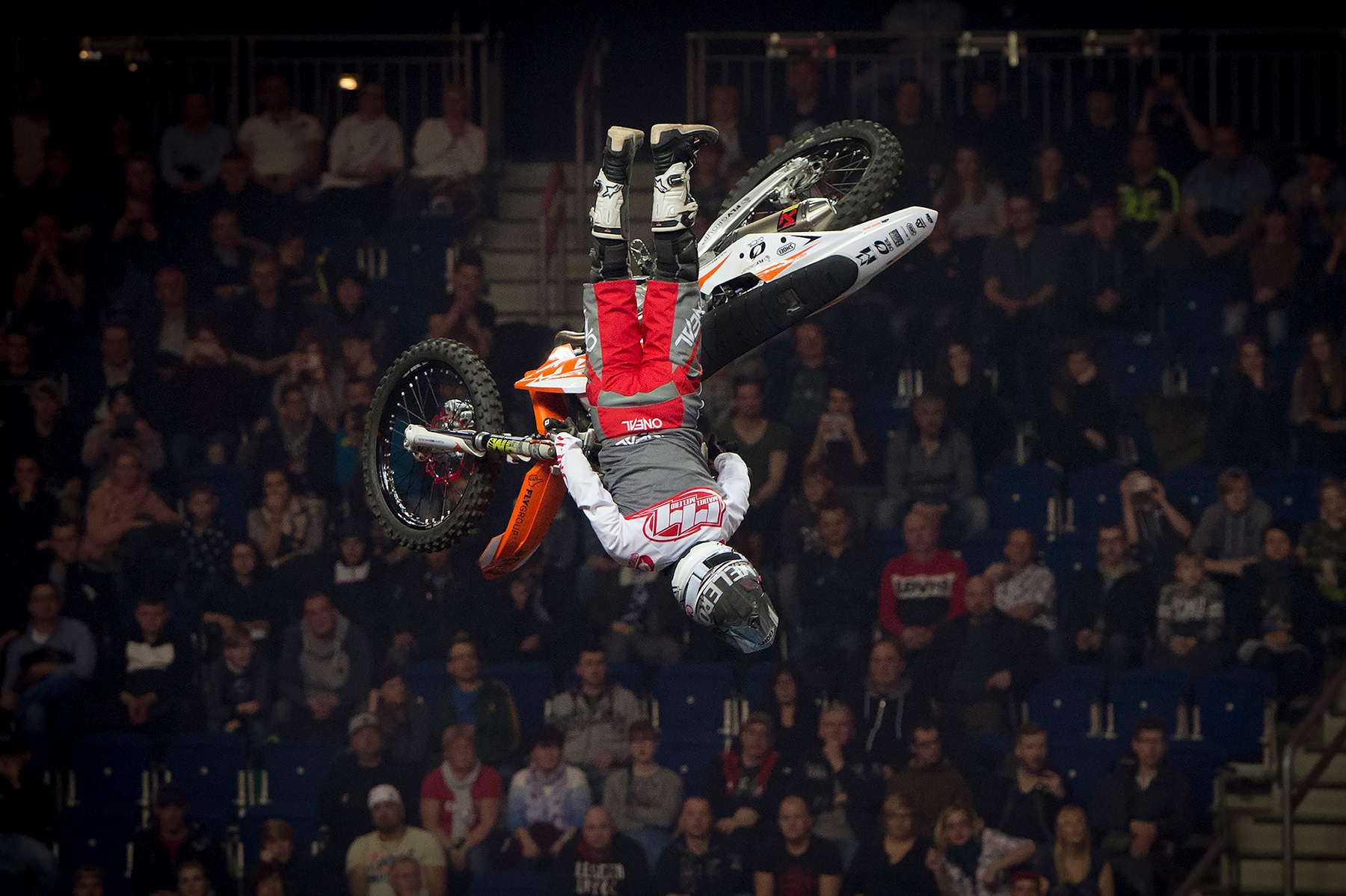 Runner up Maikel Melero.
However all of the riders in qualifying were battling for second position going into the final when the young German, Luc Ackermann unleashed one of the most devastating qualifying runs ever seen in the 19-year history of NIGHT of the JUMPs. Luc‰Ûªs variation of trickery included the 360, Egg Roll, Flair, Surfer Tsunami Flip, Front Flip and finished with the Double Backflip in the Double Up. The judges rewarded him with a huge 351 points and the leader going into the final.

Pat Bowden took the confidence of his new look back Hart Attack into the Best Whip finale against the local hero, Kai Haase, to throw a huge turn-down whip to defeat the Berliner. Kai wasn‰Ûªt finished for the night, by taking out the Synchro Competition, riding beside the Italian, Leo Fini. 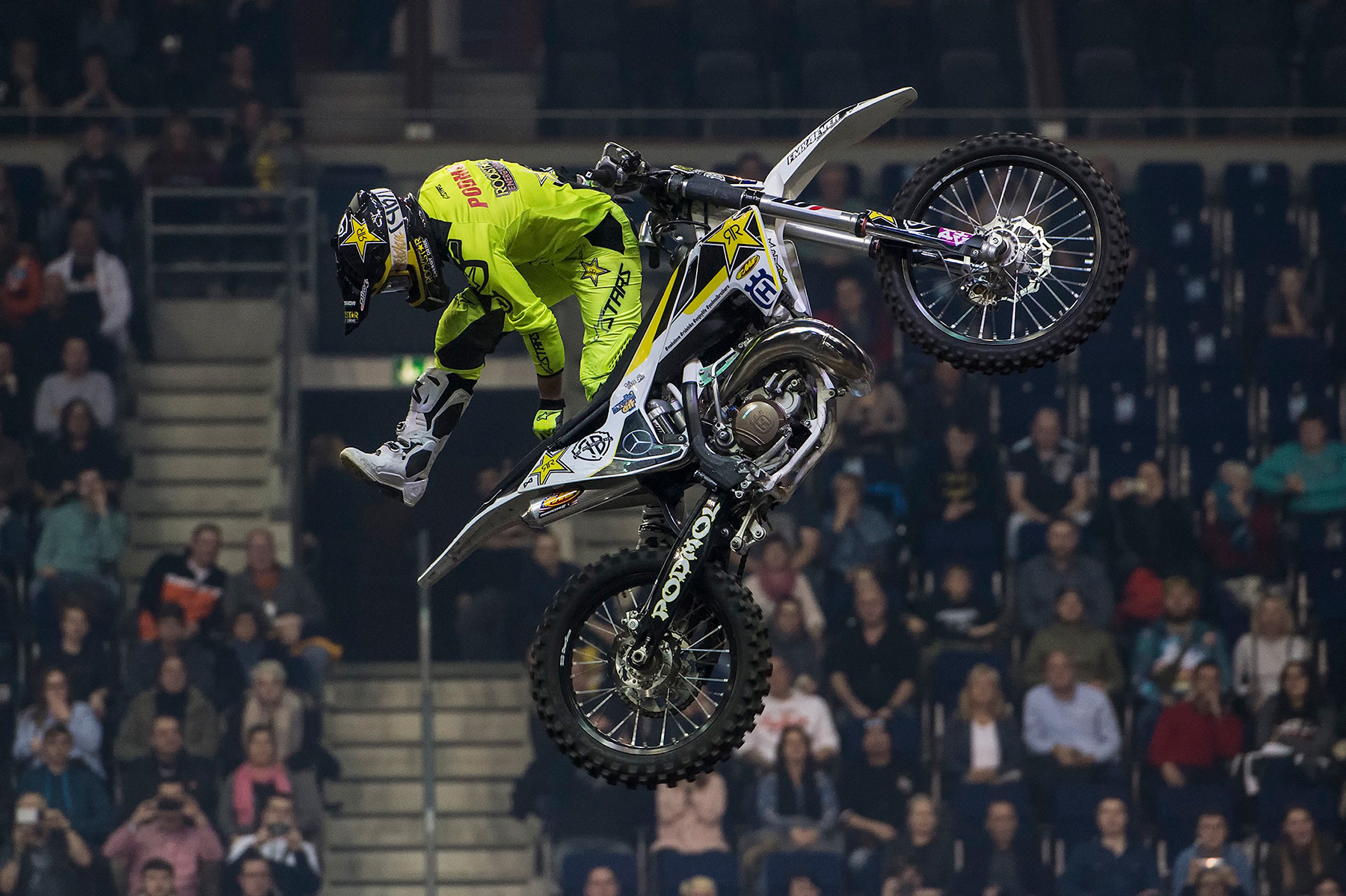 Libor Podmol rounded out the podium.
With all the riders in the Top 6 wanting to stamp their authority on the new season, there were always going to be some nerves fraying. One rider who wasn‰Ûªt expected to crack under pressure was Rob Adelberg who wasn‰Ûªt able to land his new body varial in the Double Up, and then also the Italian, Leo Fini, who crashed his Egg Roll combo in the final which decimated his final run score. Pat Bowden also followed suit and made a mistake on his Cliffhanger Backflip where he ultimately missed out on a podium to Libor Podmol who put together a safe run which included his LP Roll, Surfer Tsunami Flip and California Roll for third place on the night. 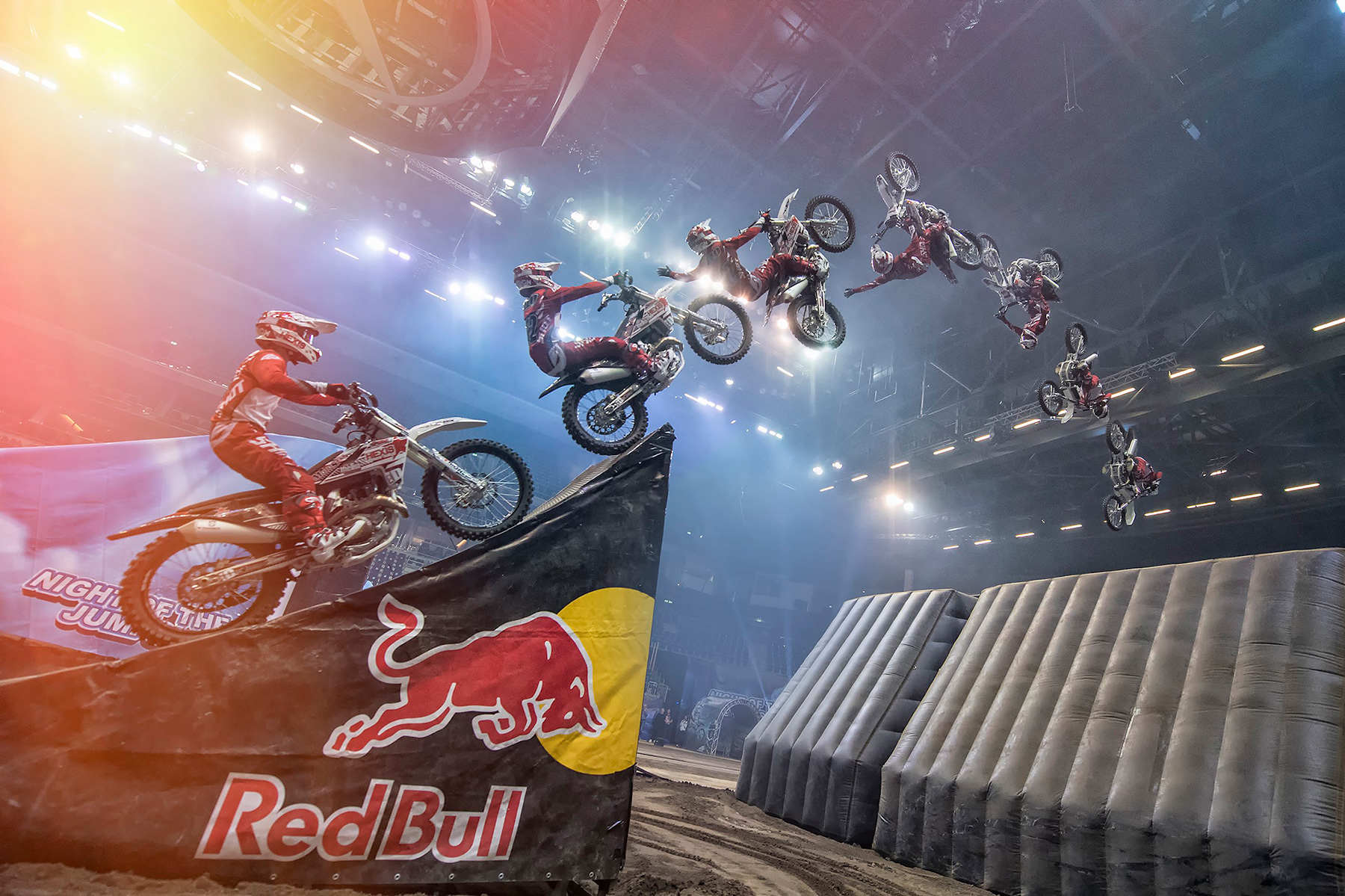 Brice Izzo
It was then a showdown between the two opponents of last year‰Ûªs World Championship. Maikel Melero wasn‰Ûªt going to submit without giving the final his best crack, landing a Nac Flair, a brand new trick at NIGHT of the JUMPs, the No Hand Front Flip, the California Roll, Lazyflip and Super Flair to finish. All of the pressure was on the German, Luc Ackermann. However in 2019, Ackermann has learned the lessons of 2018 and held his composure when it mattered most, landing the Front Flip also for his first time at NIGHT of the JUMPs, the 360, Surfer Tsunami, Egg Roll and Flair off both quarter pipes. To round out the 9 standard tricks, Luc added a Double Backflip to his run. Luc didn‰Ûªt stop there, as he upped the ante in the Double-Up by landing his Double Backflip with a Nac-Nac which gave him the unbeatable score of 398 points. 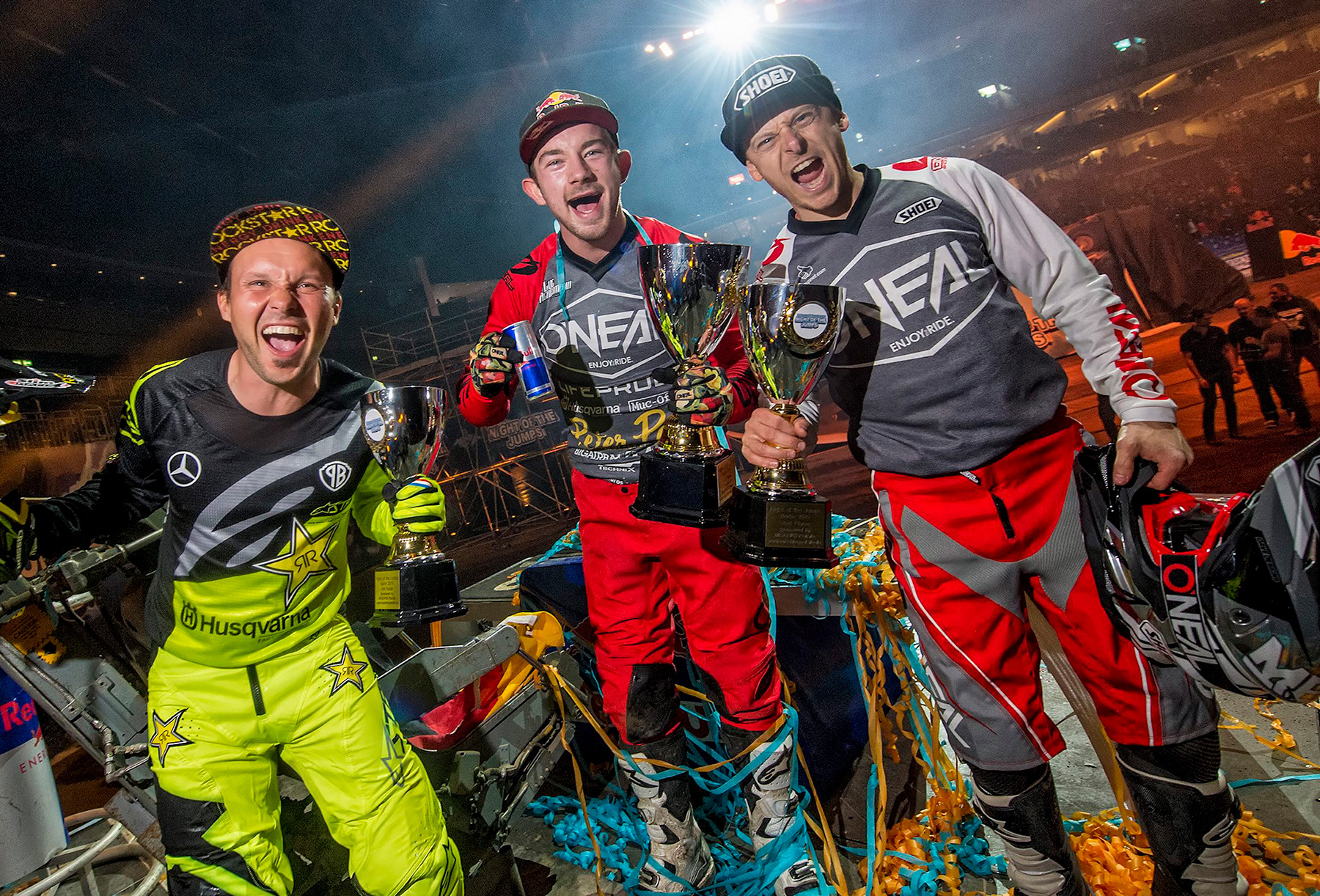