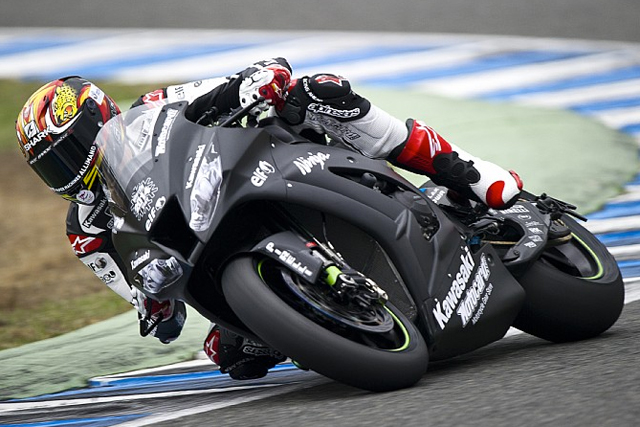 This was the first time that Loris had ridden since he fractured his D4 vertebra in a morning warm-up crash at the NÌ_rburgring in Germany on September 1. Loris found a good feeling with his Ninja ZX-10R soon after starting back on track and was pleased to get back into testing action at a good pace.

His Kawasaki Ninja ZX-10R was running its special black ‰Û÷Winter Test 2014‰Ûª livery, with white lettering. Loris was also in his black and white winter leathers as the 2014 campaign started only a day or so after the 2013 season had finished.

A small fall of rain early in the day interrupted the track action for a very short time but Loris still put in 40 laps before calling a halt. Despite high winds arriving after the early fall of rain, and Loris having not ridden for so long, he slotted back into his normal testing routine with confidence and style.

Using race tyres only, Baz put in a very low 1 minute 42 lap time, proving that the Silverstone SBK race winner had lost none of his pace during his enforced lay-off from action.

‰ÛÏI made a 1‰Ûª42.1 and did that three or four times, so I am really happy because I did not expect that." Baz explained. "I just wanted to ride and see how I felt.

"I was quite good and although I had some pain in my back it was mainly muscle that has not been used on track for some time. Also my neck muscles, which are not as strong as before.

"I am a bit tired now after doing 40 laps but that was good test and I will be better when we ride again over the next few weeks. I will continue in the winter tests with even better health and stronger muscles.

"The bike felt really good again today and I am glad to find that I did not lose anything. I feel I am riding at the same level that I was before I fell.‰Û 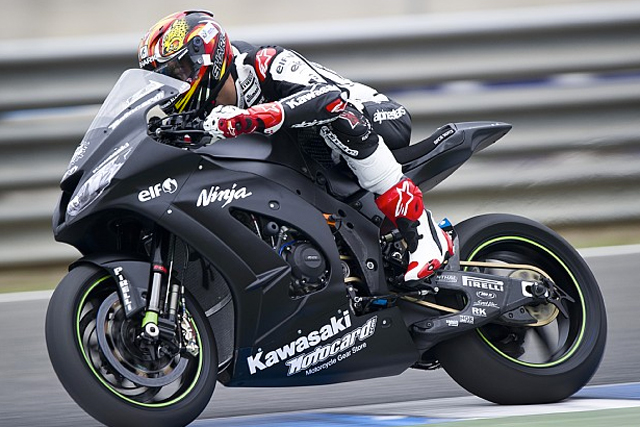 With Tom Sykes off celebrating his 2013 WSBK win, Baz was the sole Team Kawasaki Racers to put laps in during Tuesday's test
New SBK World Champion Tom Sykes made a few laps on his race bike Monday, after taking part in some promotional activities and journalists‰Ûª test session, but he did not ride in this 2014 test on Tuesday. He went back home to the UK to relax for a time before he rejoins the KRT team for the rest of the extensive winter test programme.

‰ÛÏI am very happy with today‰Ûªs test because Loris did very fast lap times with only a short time on the track, and after coming back after nearly two months of not riding the bike." Pere Riba the teams Crew Chief stated. "He has a little bit of pain in his back just because he has not ridden for so long and the muscles have to get used to it again.

"It is all very positive. We tried a few things in electronics just to look at different things for next year but this test was mostly to get a feel for how Loris was, for his back and so on. I am very pleased.

"We stopped just to let Loris rest after his first ride after injury. The wind was also very high so to make such good lap times on race tyres was very positive," Riba added.