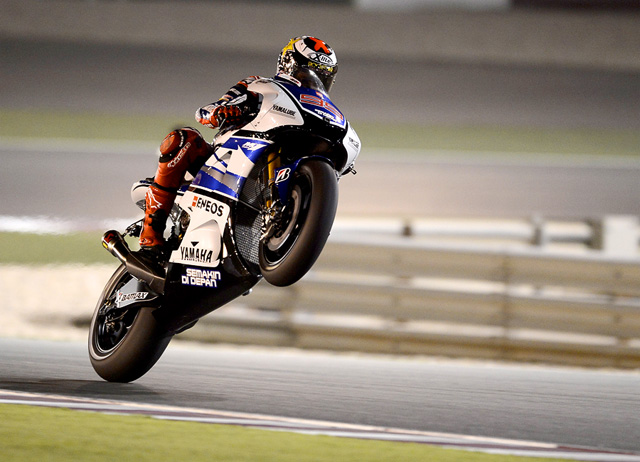 The 2010 World Champion was on top form, pushing his YZR-M1 to the limit, taking full advantage of Bridgestone's softer compound tyre to put himself 0.221 seconds clear of second place rider Casey Stoner. Lorenzo was also delighted to be joined on the front row by fellow Yamaha rider Cal Crutchlow.

"I am really happy with tonight's result," Lorenzo said. "I had to push more than 100% to make pole position but I pushed to the limit and managed to make a perfect lap. We still have to improve the power on the straight and our maximum speed but in the rest of the track the bike is working really well. Tomorrow will be a tough race and tyres will be very important I think. A big thank you to Yamaha and my team for giving me such a good bike!"

Casey Stoner will begin the defense of his 2011 MotoGP World Championship from the middle of the front row after the hectic end to the one hour night qualifying session.

The 26-year-old Australian, whose clockwork precision led to ten victories last season, had a frustrating session. Every time he and the team made a change, the expected improvement in time was elusive. By the end of qualifying he had gone full circle without significantly improving his time, nor his motorcycle. Nor was he able to take full advantage of the softer rear tyre most riders used to set their fast qualifying times. 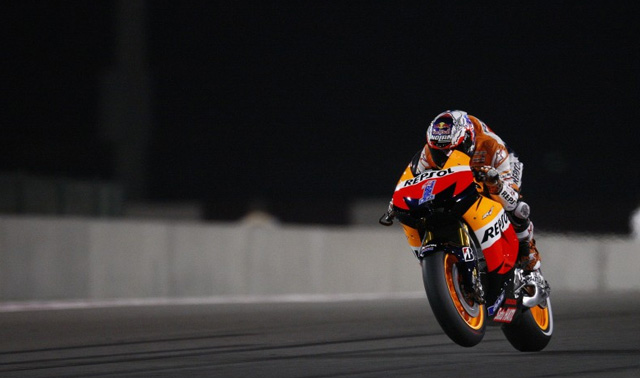 Casey Stoner will start his title defense from the second spot on the grid.
"I'm not really happy with how qualifying went for us," Stoner lamented.

"It should have been a lot better, especially on the soft tyre which we hadn't used all weekend. Last night we were happy with what we had improved and with the set-up in general. Then tonight we tried to improve that set-up and we just made it worse and worse. In the end we did a full circle and came back to what we had on Thursday night and we have huge chattering problems again.

"Now we have a lot of work to do to understand what's gone wrong and where the problem is before tomorrow. If we can make a big step forward in warm-up then we can challenge for a podium and maybe fight for the win, but if the bike remains as it is at the moment, then we are going to be in for a long hard race," the Australian concluded.

Monster Yamaha Tech 3 Team rider Cal Crutchlow lit up the Losail International Circuit by storming to a sensational place on the front row of the grid.

After finishing in a fantastic second position in practice the previous night, the 26-year-old delivered superbly when the pressure was on in the decisive final moments of qualifying to come close to snatching a dramatic pole position.

The British rider, whose previous best qualifying result was sixth position in 2011, was in contention for the front row throughout an incident-packed 60-minute session. 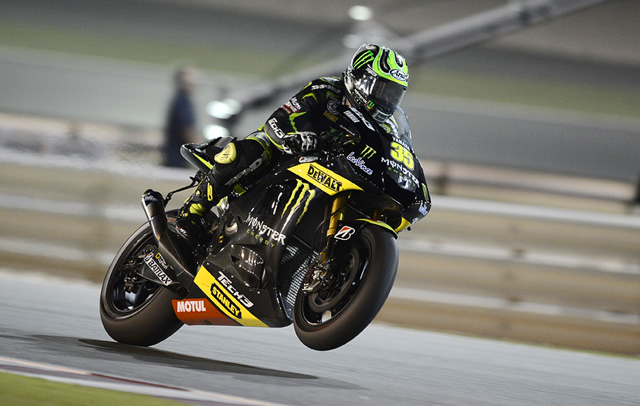 Cal Crutchlow is off to a flying start with the third fastest time.
"I'm really happy and I think we can go into the race now with a lot more confidence," Crutchlow said.

"It is a great feeling to be on the front row with Casey and Jorge because everybody is aware of how fast they are. It has felt like a long time coming to get a result like this but this is a fantastic reward for all the effort my Monster Yamaha Tech 3 crew put in over the winter.

"There's no doubt we are getting the absolute maximum out of the Monster Yamaha Tech 3 package and all I will do tomorrow night is try my best. I'd say per lap I am three or four-tenths off the pace Casey and Jorge are capable of, but that's a lot better than what it was last year."

Lorenzo's team-mate Ben Spies had also been delivering impressively quick laps on the softer tyre and was on target for a front row start until a fall minutes from the end of the session. The Texan was unhurt and walked away but had to settle for fourth and a second row start for tomorrow's race with a best lap time of 1'55.512, 0.878 from pole. 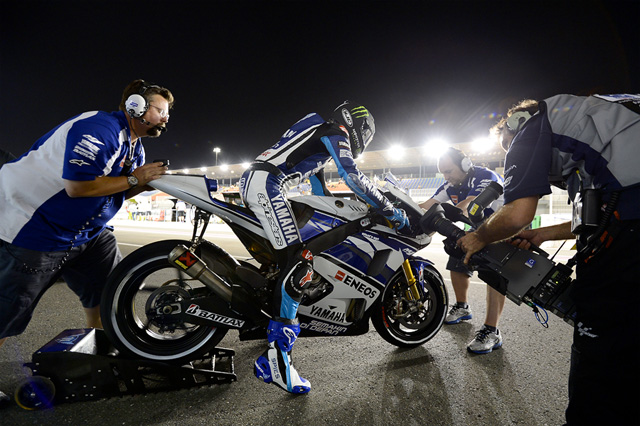 Ben Spies was 4th fastest despite a small crash in the closing stages
"We were on a good lap until the crash, I just lost the front. I've been complaining the last couple of days that the front end just didn't have the right feeling that I wanted. As I was trying to get away from the bike when I was sliding something got caught up and I went with it. I was looking at the front wheel for a while and thought about trying to get back on when I couldn't get away from it!" Spies explained.

Nicky Hayden headed the Ducati charge finishing 5th fastest while team-mate Valentino Rossi languished down in 12th place after struggeling with what Ducat refereed to as, 'setup problems'.

"Our goal tonight was to be in the top five, and I'm pleased that we achieved that," Hayden said.

"I did a 56.1 on a hard tyre and to be honest, I thought maybe I could do something really special with the soft, but all things considered, I think we did decently in our first qualifying session. We'll see if we can come here and turn it into a result tomorrow night. Tyre life is going to be important, and since we're using up the tyre a lot, we need to work on that. I still struggled a bit with chatter and understeer, especially in the fourth sector, where the corners are flat, but the GP12 is certainly the fastest Ducati I've ever ridden, which could come in handy in the race." 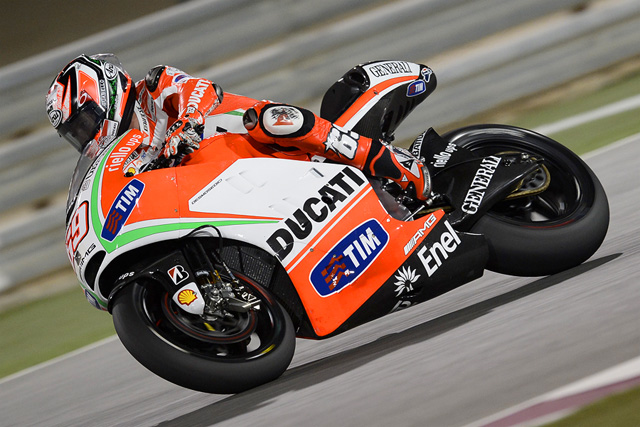 Nicky Hayden was the fastest Ducati finishing 5th fastest while team-mate Valentino Rossi languished in 12th.
Valentino Rossi is far from being on Target for a happier 2012.

"Yesterday was nothing fantastic but a lot better, especially with the used tyre, so my goal was to qualify on the second row. I'm very far from that target though, as the problems that we had before were worse," the Italian lamented.

"It's very strange because we only made some small changes from yesterday, but the feeling was very different. After that we returned to yesterday's setting and I went a little bit faster, but it wasn't enough to significantly improve the result. I'm not sure what to expect for the race, but obviously, I hope to do better. Nicky made a different setup choice than ours and did a good session with both tyres, so now we'll also look at his data and try to do better."

Andrea Dovizioso played a major part in helping Yamaha enjoy a brilliant first qualifying session in the new 1000cc era, with the Italian sixth quickest. All four Yamaha YZR-M1 machines were inside the top six.

Dovizioso secured his place on the second row of the grid thanks to a competitive time of 1.55.857, although changes to the set-up his YZR-M1 machine didn't deliver the improve performance he had been expecting on soft tyres. The 26-year-old was still able to lap consistently inside the top six on both hard and soft compound Bridgestone tyres and he is confident he will be in the podium hunt in the 22-lap race.

"Tonight didn't go as well as I had hoped but it was a part of the learning process that we need to go through to improve for the future. I'm not going to be disappointed to finish sixth but I think we were a little bit unlucky tonight," Dovizioso said.

Dani Pedrosa will start from the row three pole position after setting the 7th fastest time. Pedrosa had electrical issues on Friday and today he had further problems that forced him onto his backup bike.

"We solved a little the issues we had yesterday with the electronics, but we had other problems today. I stopped in the garage to change the bike and it didn't start, twice. I lost a lot of time there and I had to take the other bike which I didn't feel comfortable with either," Pedrosa said.