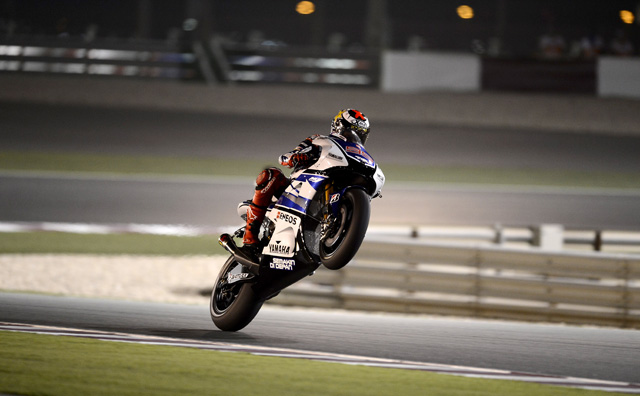 Lorenzo took the lead from the start and held off rival Casey Stoner for the first few laps before conceding the lead and tucking into second. The Mallorcan then played the waiting game, never letting Stoner more than two seconds ahead.

With seven laps to go he started to close the distance as Stoner's pace dropped off, holding off a determined Dani Pedrosa on his tail to take the lead. Lorenzo crossed the line 0.852 seconds ahead of Pedrosa, taking the first win for the 2012 season and the 25 points that come with it.

"What an amazing race, I put everything I have, all my energy into the track, this victory is because I never gave up, kept pushing and trying." said an elated Lorenzo.

"Casey was very strong at the beginning and opened a gap. Fortunately for us he struggled at the end and dropped his pace where I could keep mine so I managed to pass him. I am very grateful to Yamaha because they have made a big step this winter on the YZR-M1." he concluded. 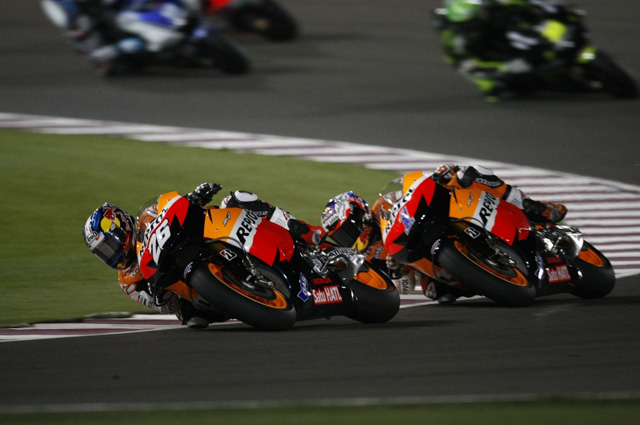 "I'm very happy with this result because we have been able to turn around all the problems we had during the weekend." said Pedrosa.

"After a good pre-season we got here and everything went wrong; I had flu and a fever, I crashed on Friday, and then the qualifying practice was a disaster. So, it's very good to leave here with this podium, even if I feel little bit sad because I thought I could win this race; I had it in my hands for a while." the Spanish rider commented.

"The team did a fantastic job and we saw things very different after warm-up. Then I managed a perfect start which was a key moment in the race, and I was able to stay with Casey and Jorge." he continued.

"In the end, with four laps to go I tried to take the lead, but Lorenzo was cleverer than me this time and choose a better strategy. I passed him but he overtook me immediately and also Casey, then I was behind Casey for one lap and lost contact with Jorge. Anyway, it's a good start to the season and we will try to do better in Jerez." Lorenzo concluded.

Stoner who controlled the race from the third of 22 laps on the 5.380Km desert circuit after starting from second place on the grid had some trepidation about his set-up, but the early laps showed a confident Stoner streaming into the lead.

By lap 13 his lead began to shrink. Speculation was that it was tyre-related-the new control Bridgestone tyres warm up faster at the expense of durability. In fact it was a rare occurrence of arm pump. The world champion began to have difficulty holding onto the Repsol Honda RC213V, a problem that got progressively worse.

"It wasn't really the way we wanted to finish the race weekend here." said Stoner. After Free practice three and qualifying it was always going to be a tough race for us, but in the end it came in the wrong areas."

"The bike was working well for us. I definitely had the package and the pace to lead the field, which was really positive. However, I suffered from really bad arm pump. After three or four laps I felt it but it gradually got worse." the Australian explained.

"I tried to pull a little gap from Jorge and Dani and put in the minimal effort possible to retain the gap and try and win, but as the race continued it got worse and worse and eventually the muscles had nothing more to give." continued the current world champion.

"I couldn't hold onto the handlebars properly and it made things really difficult, so it was a disappointing race for this reason, but for many other technical reasons it was very promising." Stoner concluded. 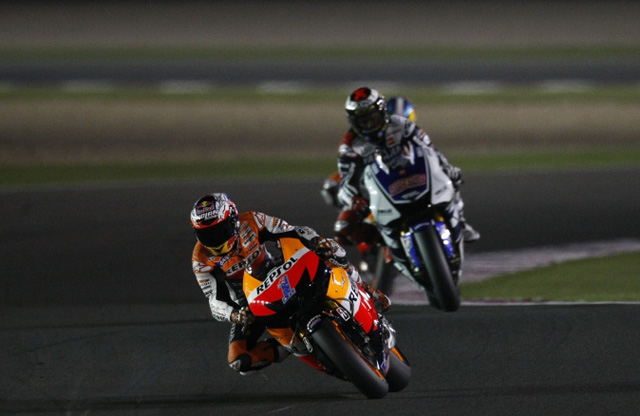 Casey Stoner lead the majority of lap at Qatar but not the one that counted after suffering from Arm Pump.
Cal Crutchlow lead a four-way battle that went all the way to the line for fourth place. Crutchlow was able to edge out team mate Andrea Dovizioso that finished in 5th. Nicky Hayden aboard his Ducati finished in 6th and Alvaro Bautista in 7th were the remaining two riders in the tightly bunched pack fighting for forth spot.

"That was a great way to start the season but it was a really tough race." Crutchlow stated. I didn't make a great start and lost a few positions and that is a bit disappointing because I'm sure I could have been much closer to the top three."

I wouldn't have been fighting with them but I lost a bit of time and the gap to them could have been halved. It was a great battle with Andrea and I enjoyed it. I learned a lot as well because he has a lot of experience and it was a game of cat and mouse for a long time."

"The good thing about tonight is I backed up all the good performances in winter testing and being close to the front with my best MotoGP race. I know I was fourth in Valencia last season but the conditions were tricky and not everybody finished.

"This was a true result and I am delighted too for my Monster Yamaha Tech 3 crew. They have given me amazing support and this result gives us all a lot of confidence to take to Jerez." he concluded.

Dovizioso was a little disappointed with his fifth place finish and finishing behind his Monster Yamaha Tech3 team mate Crutchlow at the opening round of the series but knows once he has fully mastered his new Yamaha bike his results should be better.

"Fifth place is not a bad result but I can't be happy." said Dovizioso. "I think it is mainly down to my lack of experience of racing the Yamaha and tonight I learned a lot that will make us stronger for the next race in Jerez."

"I really wanted to do a great job but I couldn't for a few reasons. On one hand I have still not fully mastered the Yamaha and on the other hand I think I didn't get the best set-up with the chassis or the electronics and I'm sure I could have got a much better result." he explained.

"It was a pity also that I couldn't keep fourth from Cal but I didn't feel confident in the final part of the race. Take nothing away from him though because he did a very good job. I will try to use this experience in a positive way because my Monster Yamaha Tech 3 Team did a great job to help me to understand the bike as fast as possible and I am sure we will be stronger in Jerez." Dovizioso concluded. 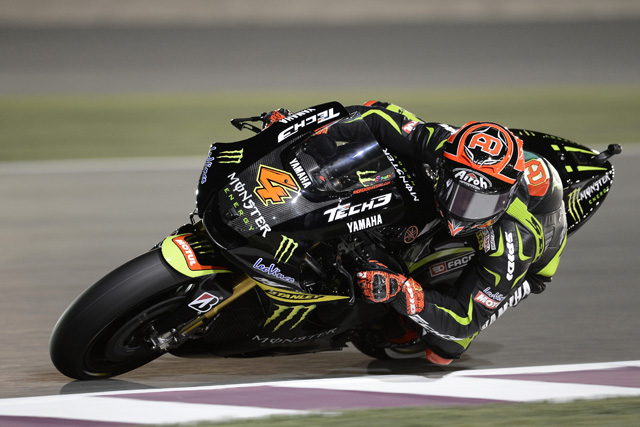 
The MotoGP paddock now moves to Jerez in three weeks time for round two on the 29th April.

Main Photo: Lorenzo got the season off to the perfect start with a win in Qatar. 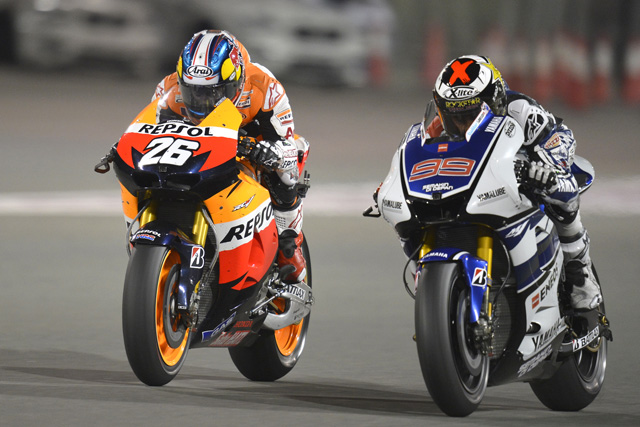 Lorenzo and Pedrosa fought out the race right to the finish line.