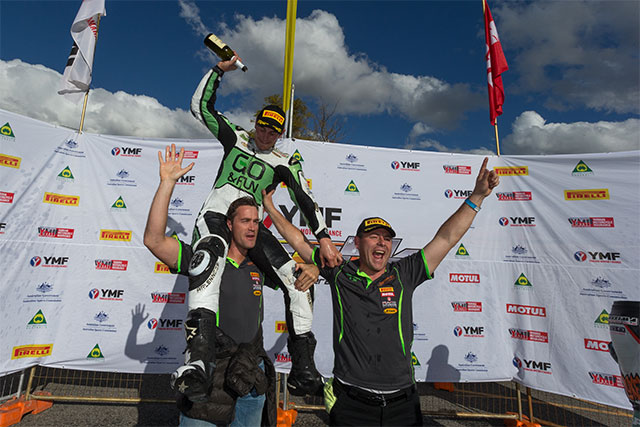 It was a perfect day at Barbagallo Raceway for Banham WA Racing‰Ûªs Sam Clarke, who raced to two impressive race wins, going undefeated, and becoming the Motul Supersport Championship leader in front of a home crowd at Round 4 of the Yamaha Motor Finance Australian Superbike Championship presented by Motul Pirelli.

Clarke, who arrived at Round 4 on a wave of confidence, did not disappoint his Western Australian fans today, fighting off tough competition to conclude the day victorious.

Despite Clarke starting the first Motul Supersport race of the weekend on pole, when lights turned green and bikes left the grid for the first time today, it was JNL Racing‰Ûªs Luke Mitchell who launched in to the race lead, however with the home crowd advantage at Round 4, Banham WA Racing‰Ûªs Clarke only took half a lap to move into the top spot and from there the Kawasaki pilot checked out.

With three laps in the books, Clarke had more than a 1.2 second lead on Mitchell who continued to circulate in second, while series points leader Troy Guenther (Graffiti Alley Racing) held down third position, from Cube Racing‰Ûªs Callum Spriggs and Ben Blyth, who maintained fourth and fifth positions respectively.

With Clarke out in front, the battle for positions came from Guenther and Spriggs who were both going head to head for third position, keeping spectators guessing as to who could make up time through the sectors at Barbagallo.

By lap 10, the front four Supersport riders Clarke, Mitchell, Guenther, and Spriggs all began to spread out, pulling a 13 second gap on fifth placed Blyth, and putting two seconds between each other‰Ûªs respective positions.

From there, there was no change to the standings, with Clarke streaming to his first Motul Supersport race victory for the weekend by 2.346 seconds, followed by Mitchell, Guenther, Spriggs and Nic Liminton who made a late charge for fifth position.

Despite showing early speed, Blyth wrapped up race one in sixth, followed by Chris Quinn, Matt Price, Robbie Menzies and Thomas Bryden who all completed the top ten finishing positions.

With a race one victory, Clarke immediately became the Motul Supersport Championship leader by a marginal two points from Guenther before the lunch break, setting up the last race of the day as a dash for ultimate glory.

In the final race of the day, Clarke had the support of the home crowd behind him, so it was no surprise to see his Kawasaki machine get the jump off the start, followed closely by JNL Yamaha‰Ûªs Mitchell in second and Spriggs in third.

With three laps in the books, Clarke stretched out his lead to .553 of a second, while Spriggs managed to get by Mitchell to move in to second position, while Guenther was in third.

From there, the front four riders separated themselves from the rest of the Supersport group, and by lap seven, Clarke began to come under fire from Yamaha mounted Mitchell who was not prepared to take second without a fight.

However, in a surprise to spectators a mistake from Mitchell on lap nine caused him to drop back to fourth, and left the door open for Cube Racing‰Ûªs Spriggs to launch his attack on local rider Clarke.

And from there the final Supersport race of the day was set to go down to the wire ‰ÛÒ Clarke holding off Spriggs by the smallest of margins (0.194) while Guenther and Mitchell continued to apply the pressure in positions 3 and 4.

Mitchell, who was determined to snatch up points in race two, managed to get by Guenther with only two laps to go, and when riders headed in to their final lap of the day on the Barbagallo circuit, Clarke was in the box seat to collect his second victory on home soil.

And when the chequered flag flew for the final time, Clarke and the Western Australian crowd celebrated - the Kawasaki star racing to the final win, going undefeated at Round 4 and snatching up the Motul Supersport Championship lead.

Following Clarke, was Spriggs who crossed the line in second position in the final race of the day, while Mitchell was forced to settle for third.

Despite entering the round with the championship lead, Guenther wrapped up race two in fourth position, followed by Ted Collins, and Nic Limiton.

When the points from both races were tallied, Clarkes 1,1 results saw him awarded with the round four Motul Supersport victory, while JNL Racing‰Ûªs Mitchell took the second step on the podium, followed by Cube Racing‰Ûªs Callum Spriggs.

Clarke shared his thoughts, moments after celebrating with champagne, alongside family and friends.

‰ÛÏIt‰Ûªs been an awesome weekend ‰ÛÒ we‰Ûªve had a good round and we have increased the championship lead even more in that last race, which is what we came here to do,‰Û