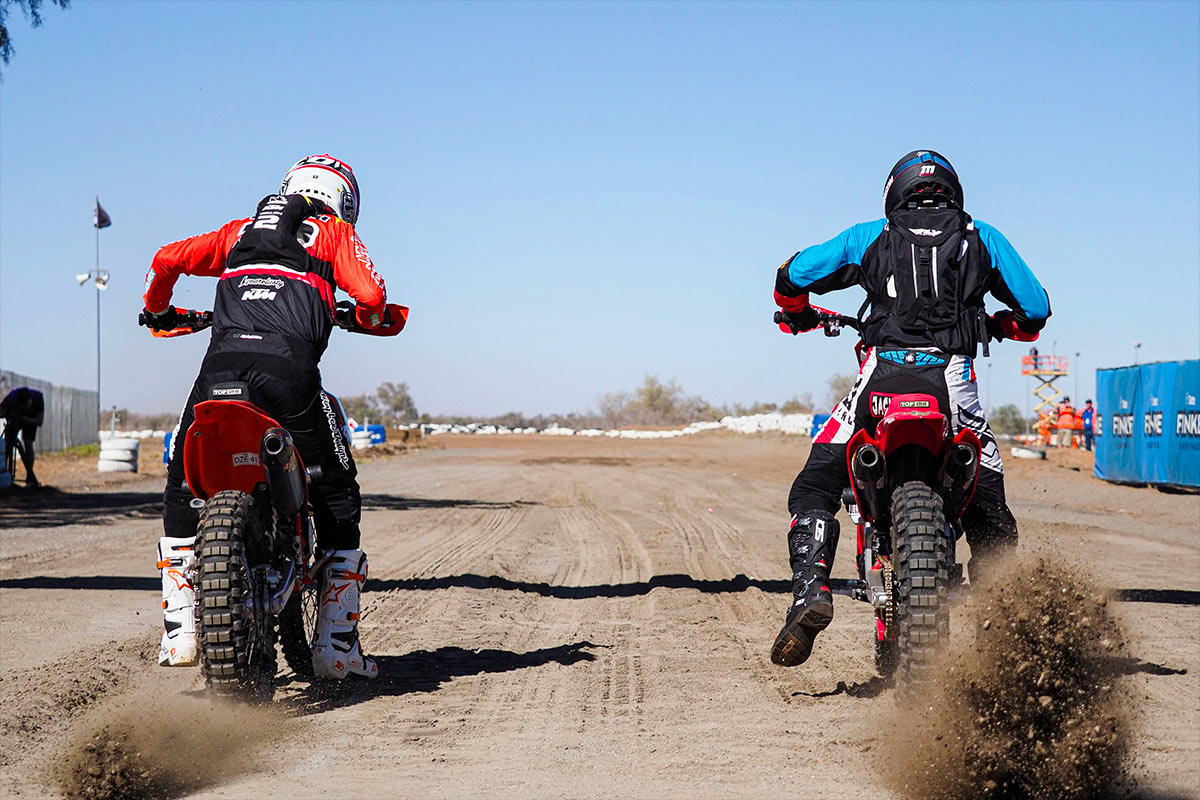 Alice Spring‰Ûªs own David Walsh is one step closer to his first King of the Desert title after blitzing the bike field to arrive at Finke in 1 hour 55 minutes and 25.7 seconds on Race Day 1 of the 2019 Tatts Finke Desert Race.

The hometown hero lead the 612-strong field from the start line as he aims to take the elusive top step of the podium, having finished second in 2018, 2014 and 2012.

Walsh was just over 5-minutes clear of next-best Jacob Smith, who moved up two places from a Prologued position of 4th.

In his eleventh Finke campaign, Smith, from Condobolin, NSW, sits 5 minutes and 0.7 seconds behind Walsh as he looks for his first podium finish at the event in six years.

Beau Ralston was just behind his teammate, setting a time of 2 hours 2 minutes and 33.9 seconds on the rough and dusty track.

In his second Finke campaign, Geelong‰Ûªs Callum Norton was one of five Victorians to finish in the top ten, coming in fourth ahead of tomorrow‰Ûªs return leg to Alice Springs.

The eighteen-year-old race favourite is only 8 minutes and 37.5 seconds behind the race leader, an impressive effort with many other race favourites not making it to the Finke checkpoint on Day 1.

Fellow Victorian‰Ûªs Jack Simpson and Echuca's Sam Davie were fifth and sixth reaching the end of Day 1 with times of 2 hours 5 minutes and 46.1 seconds, and 2 hours 6 minutes and 10.5 seconds respectively.

In seventh place and the first of the South Australian‰Ûªs to cross the line was Mt Gambier‰Ûªs Kent Collins, 14 minutes and 35.1 seconds behind the leader.

In their first Finke campaigns Thomas Jones and Nicholas Waters rounded out the top ten in what was a difficult day for all riders competing in Australia‰Ûªs toughest off-road race.

Territorian Jack Dooley-McDonnell who third was off the line this morning, failed to make the 226km journey to Finke as did race favourite Nathan Trigg.

To celebrate the 20th anniversary of writing himself into the AFL record books, St Kilda and Sydney Swans legend Tony Lockett commenced his ninth Finke Desert Race campaign, finishing the day inside the top 350 riders.

After camping overnight, the bikes will leave Finke tomorrow (Monday) morning at 11.45am CST for the run back to the Alice Springs finish with the first bikes expected to arrive at approximately 2.05pm CST.

The 2019 King of the Desert will be crowned following the bikes return to Alice Springs tomorrow.

Full results for the 612-strong field can be found here