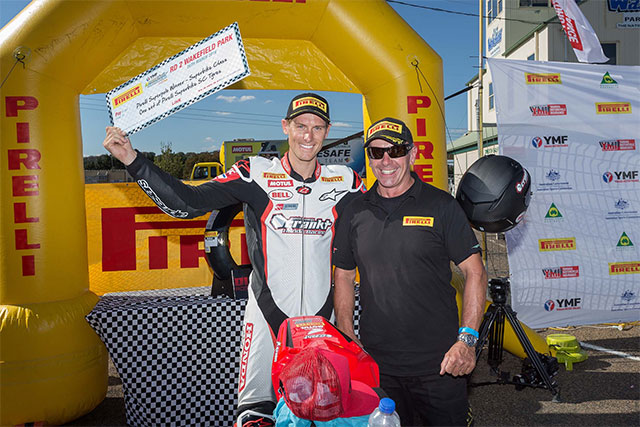 Wakefield Park Raceway was a hive of activity today, as riders got down to business at Round two of the Yamaha Motor Finance Australian Superbike Championship presented by Motul Pirelli.

The Yamaha Motorcycle Insurance Superbikes and the Motul Supersport categories had the opportunity to put down their best times throughout qualifying sessions today, with the top six Superbike qualifiers also taking part in their first Pirelli Superbike Superpole for 2016.

In the opening Motul Supersport qualifying session, it was Kawasaki mounted Sam Clarke who set the pace for the day with a 1:00.479 lap on fresh track conditions, while JNL Racing‰Ûªs Luke Mitchell impressed with the second quickest time (1:00.683), ahead of Graffiti Alley Racing‰Ûªs Troy Guenther who was just off the pace with a 1:01.036 lap. Repsol Triumph rider Mark Chiodo was a notable absentee from the front of the field, going down during the first qualifying session, leaving him with the 17th quickest time at the conclusion of the 25 minutes.

And when bikes exited the pits, it took no time at all for Herfoss to find his flow, setting a quick lap time of 57:567 on lap five. However, it wasn‰Ûªt long before a Yamaha machine chased down the local ‰ÛÒ Wayne Maxwell smashing out a new lap record on lap 11, with a 57:513, Herfoss was then relegated to second.

With around ten minutes remaining, the first Superbike qualifying session was red flagged, due to a break down at turn ten, and when qualifying resumed no one was able to match the lightening fast speed of Maxwell, who held on to the top spot with his 57:513 lap. Second place qualifier was Herfoss on his Crankt Protein Honda machine (57:567) while Glenn Allerton wrapped up the 30-minute session in third (57.594). Ant West also made significant progress throughout the morning, concluding the first qualifying session in position four, with a 58.082 lap, while Yamaha mounted Cru Halliday rounded out the top five with a 58.266 lap.

After an entertainment filled lunch break with pillion rides and stunt bike riders keeping the crowd cheering, the Motul Supersport category got their second qualifying session to a flying start.

With the a Pirelli Superpole Award up for grabs, riders looked to find additional speed on what was beginning to be one hot track ‰ÛÒ and with Kawasaki‰Ûªs Clarke having set a lightening fast pace this morning, he was the man to beat this afternoon.

Despite Graffiti Alley Racing‰Ûªs Guenther topping the time sheets during the final qualifying session for the day(1:00.607), Clarke‰Ûªs morning pace could not be matched ‰ÛÒ the Kawasaki star snatching up the first Motul Supersport Pirelli Superpole for 2016, with a 1:00.479 lap at a sundrenched Wakefield Park.

An elated Clarke shared his excitement in taking the first Motul Supersport Pirelli Superpole Award for 2016, and say‰Ûªs he‰Ûªs looking forward to being at the front of the grid when racing kicks off tomorrow.

‰ÛÏI am feeling really good right about now that‰Ûªs for sure ‰ÛÒ we had the pace at Phillip Island and unfortunately I went down, so coming here and rewarding the team with the bike on Pole is the best feeling ever,‰Û