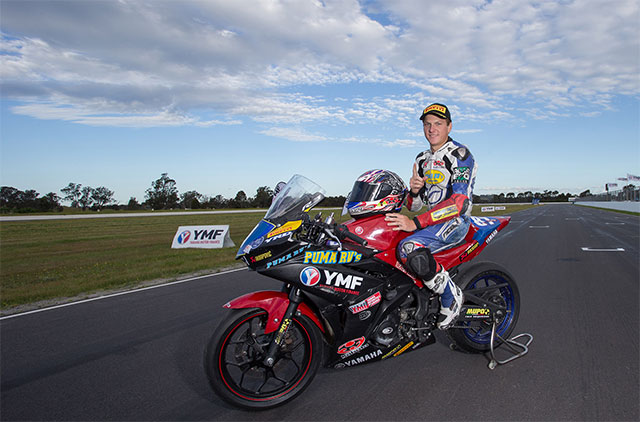 After collecting the first race victory in the YMF R3 Cup yesterday, expectations were high when Levy headed out on to the Winton Motor Raceway circuit for the classes second race this morning, but when bikes left the grid no one could have predicted the drama that unfolded.

After less than a lap, both Levy and YRD‰Ûªs Callum Alderson went down, and despite getting to their feet, the pair handed the top two positions over to Aidan Hayes and Ford Brothers Racing‰Ûªs Hunter Ford.

And it wasn‰Ûªt long before Ford began to apply the pressure on Hayes for the lead, and by the time riders headed in to lap two, spectators were greeted with a new race leader.

Just behind the top two, Adelaide Motorcycle Recovery‰Ûªs Ty Lynch and Stay Upright‰Ûªs Jack Passfield were locked in to their own battle for the final podium position, while Michael King, James Boyle and AMCN‰Ûªs Christopher Dobie all occupied positions inside the top ten.

With only two laps remaining, back markers came in to play, but Passfield put the foot down, and made a clean pass on Lynch for third.

But when the chequered flag was waved, it was Ford who secured the race two YMF R3 Cup victory, followed by Hayes in second, and Passfield in third. Lynch, King, Boyle, Dobie, Steven Mason, Levy and Arkadius Depczynski all finished inside the top ten.

Despite finishing a disappointing ninth in race two, Levy still had plenty of reason to celebrate this morning, securing the YMF R3 Cup championship a race early, and finishing his 2016 ASBK campaign well ahead of his competitors.

With two other positions on the championship podium to be awarded this afternoon, the second race turned out to be nearly just as nail biting as the first.

It was newly crowned 2016 champ Levy who got the initial jump off the start, but within half a lap, Ford had closed in on the Puma RV rider‰Ûªs rear wheel, kick starting a battle that would continue all the way to the chequered flag.

Back from the lead pair, YRD‰Ûªs Alderson looked to be having a strong ride in third place, while Hayes and Passfield occupied positions fourth and fifth.

With Ford and Alderson separated by only five points for second in the championship at the commencement of the final race of the day, Alderson gave it his every attempt to chase down the two race leaders.

But Ford and Levy were locked in to their own battle at the front, each taking their turn to lead for periods of time throughout the race.

But when the chequered flag flew, it was Levy who got the job done for the second time this weekend, taking the final YMF R3 Cup race win from Ford who crossed the line in second, followed by Alderson in third. Passfield and Hayes both finished in positions fourth and fifth at the conclusion of the race.

With Levy claiming the YMF R3 Cup Championship earlier today, second place in the championship was secured by Ford Brothers Racing‰Ûªs Ford thanks to his ride in the final race, while YRD‰Ûªs Alderson wrapped up the 2016 season in third overall in the YMF R3 Cup championship.

"It's awesome to have taken out the first YMF R3 Cup Championship. To get my name on the trophy in the first year is exciting," Levy shared.

"It's been a good weekend, but it's also been good year, I've really enjoyed myself and hopefully I can find something for next year now, so I'll see how it goes.

"I'm thirsty for more now. All of the travel, the money and the effort has paid off, and it's great to reward the team for all their hard work with a championship."