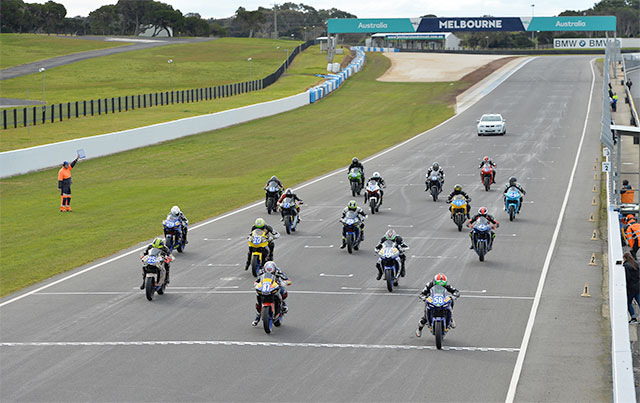 It was a cold start to the morning for the YFM R3 Cup competitors with the track temperature at only 9.7 degrees and the sun shining just beyond the cloud cover for Qualifying 1 at Round 4 alongside the Victorian Road Racing Championship, for this national Class.

It was straight in to qualifying one for these competitors and by the conclusion of the fisrt session, YMF R3 Cup competitor YRD‰Ûªs Callum Alderson had warmed his tyres on the Phillip Island track, allowing him to produce the fastest time of 1:53.128.

Aiden Hayes (1:55.992) and Ford Brothers Racing's Hunter Ford (1:56.303) finished the session in second and third respectively, almost two second off Alderson‰Ûªs pace. But with another qualifying session left for the weekend all hope was not lost to post the fastest time.

By the time the second qualifying session came around the sun was situated above the track and it was beginning to warm up. With 16 bikes all vying for to post the fastest lap time, Alderson's speed just couldn't be met increasing his pace to a 1 minute, 52.716 second lap time and securing pole position for the race starts to come.

Puma RV Motorsport‰Ûªs Zac Levy (1:54.418) reduced his times with every lap and managed second position on the grid for the three race starts just behind Alderson. Michael King posting the third fastest qualifying time of 1:55.819, while Hayes and Ford rounded out the top five grid positions.

When race one commenced for the YMF R3 Cup competitors it was Levy who got the jump off the start to lead the very first lap for this national class around Phillip Island Grand Prix Circuit.

However, midway through the second lap of this 7 lap race Alderson had clawed his way back in to first position, making it clear to spectators that it was going to be a battle to the finish line for Alderson and Levy.

King, Hayes and Ford moved in to third, fourth and fifth positions respectively but before another move could be made the race was quickly red flagged on lap two, with Alderson crashing at turn 9.

With the race one restart for the YMF R3 Cup competitors reduced to 4 laps and Alderson absent from the grid, it was once again Levy who moved his YZF-R3 in to the number one position leading around the first corners of the track.

A move at Lukey Heights saw King in second and Ford in third, and as they came around turn 12 to mark the end of the first lap of the race restart positions hadn‰Ûªt changed with Levy out in front by only a fraction of a second and King hot on his tale. It was evident that Ford, Hayes and Stay Upright's Jack Passfield weren‰Ûªt going to give up without a fight however, side by side down the front straight.

The half way point in the saw race pace kicked up a notch as times decreased and the battles got tighter. Levy lead over the start finish line this time with Ford just behind managing to make his pass on King stick. Hayes and Passfield were still tucked in behind, in fourth and fifth, looking ahead to increase their position in the race with only two laps to go.

Rounding out the top ten positions was Tayla Relph who‰Ûªs position had improved with every lap as her confidence on the R3 grew. Seventh, eighth and ninth was occupied by Ty Lynch, Aaron Wade and Daniel Moore, while Steven Mason rounded out tenth position.

And by the final lap in the race, the pack was starting to separate. The chequered flag marked the conclusion of race one for these athletes as they came across the start/finish line. Levy secured the race one victory for the weekend, and with no changes to positions in the closing stages of the race the top five riders remained with Ford second, while King sat in third.

Hayes and Passfield finished fourth and fifth repectively. Sixth position was the lady out on track Relph on the AMCN R3, with the remaining four positions secured by Lynch, Moore, Wade and Mason.