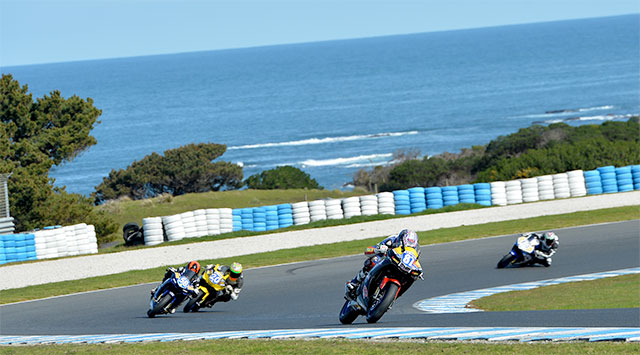 Zac Levy showed fans his dominance today at Round 4 of the YMF R3 Cup as he took a clean sweep of race wins, in what was some close racing at Phillip Island Grand Prix Circuit alongside the Victorian Road Racing Championships.

After today‰Ûªs two races Levy has swooped in on Alderson Championship chase stealing the lead by 19 points heading in to the grand finale round of the Australian Superbike Championship at Winton Motor Raceway in only a few weeks‰Ûª time.

It was a cold and rainy start to the morning as the YMF R3 Cup competitors headed out for their practice lap, but by the time racing was ready to commence the track had warmed to 23.5 degrees, with anticipation in the air as the bikes lined up of the grid pending the start of the six lap race.

As bikes left the grid in a roar of engines it was Puma RV Motorsport‰Ûªs Zac Levy who got a blistering start storming in to turn one with a solid lead. As they battled around the track to mark their first lap of the race, Levy remained consistent in the lead coming on to the front straight.

Just off the pace heading down Gardiner straight at the end of lap one was YRD‰Ûªs Callum Alderson with Ford Brothers Racing‰Ûªs Hunter Ford only centimeters off his tail making use of the slip stream, but still unable to catch him. With positions changing left, right and centre from fourth position onwards, spectators remained on their toes to see how the remaining five laps would play out.

By lap three Levy has stretched his lead on YRD‰Ûªs Alderson to .652 of a second, while Ford Brothers Racing‰Ûªs Hunter Ford remained glued to the back of Alderson‰Ûªs tail not letting the Yamaha mounted rider out of his sight.

Coming through the back section of the track for the remainder of lap three was Levy, Alderson and Ford, while Hayes Johnston‰Ûªs Aiden Hayes and Brandsense‰Ûªs Michael King battled in their own fight, but kept their eyes also locked on the pair battling in front. Stay Upright‰Ûªs Jack Passfield, Ty Lynch and AMCN‰Ûªs Tayla Relph sticking together in sixth, seventh and eighth position, while CityCoast MotorCycles‰Ûª Daniel Moore and Steven Mason rounded out the top ten positions.

Alderson carrying momentum in to the final stages of the race managed to lengthen the space between himself and Ford and was now hunting down first placed fellow YZF-R3 competitor Levy, Alderson now only .231 seconds off his tail. Ford began a solo race with King still behind. In a series of moves spectators saw a change in standings with Passfield making his way to fifth, while Relph also climbed positions, now in sixth. Lynch and Hayes relegated to seventh and eighth.

Even further back in the pack Mason had overtaken Moore with only two laps remaining on the board.

And as they twisted and turned their machines for the last lap of race two around Phillip Island Grand Prix Circuit it was Puma RV Motorsport‰Ûªs Levy, despite Alderson‰Ûªs fight, who was once again victorious for the second time this weekend for the young rider as he crossed the line with a wave of the chequered flag.

Alderson secured second while Ford rode a steady and consistent rest of the race to come across the line solo in third position. The battles for the remainder of the field went down to the wire as the chequered flag marked a fourth place finish for King, Relph pushing herself to fifth, while Hayes fought back to sixth.

When the third and final race of the weekend commenced it was once again Levy who got the jump off the start to lead the first lap around Phillip Island Grand Prix Circuit and with Hunter Ford and Callum Alderson hot on his tale, another showdown was playing out before the crowd.

But it wasn‰Ûªt long before those positions were once again changed as Alderson put his machine in front of Ford on the second lap of race three. Aiden Hayes, Michael King, Tayla Relph, Jack Passfield and Ty Lynch all bunched together, locked in a battle.

But with two laps down it wasn‰Ûªt long before Lynch made his appearance, slip streaming Levy, Alderson and Ford to make a pass in to turn one but unfortunately was unable to make any move stick as they headed in turn two. Ford took second position from Alderson with a swift move, and by the end of lap three Hayes had once again dropped off the mark leaving the fate of the race in Levy, Ford and Alderson‰Ûªs hands.

With only three laps to go spectators couldn‰Ûªt pick who would win, as they came around the track and with Hayes and King still in fourth and fifth. The battles happening further back in the pack now saw Lynch in sixth, Passfield in seventh and Relph relegated to eighth.

And heading in to the concluding stages of the race, Ford made a move on Levy but was unable to make it stick, still sitting second as they crossed the start/finish line with the last lap board showing, the battle neck and neck heading in to turn one.

All eyes were on the front three race leaders to see if anyone was game enough to make the all-important move for first place in the remaining corners of the race but once again Levy made his mark on Phillip Island and swept away only moments from the chequered flag to steal another victory. Levy securing the Round 4 win in fine fashion.

Ford and Alderson near touching as they crossed the finish line in a brilliant battle to the end. With all eyes locked on the pair they finished race three in second and third respectively.

Hayes and King finished the last race in fourth and fifth, with Lynch, Passfield, Relph and Moore in sixth, seventh, eighth and ninth position. Aaron Wade finished the final race of the day in tenth.

A happy Zac Levy spoke about his victory at Phillip Island now securing the Championship lead by 19 points over Alderson heading in to the final round at Winton.

‰ÛÏIt has been a positive weekend! We didn‰Ûªt get to practice because I had to pour a house slab on Friday for work, so got down here Friday night and went straight in to qualifying one,‰Û