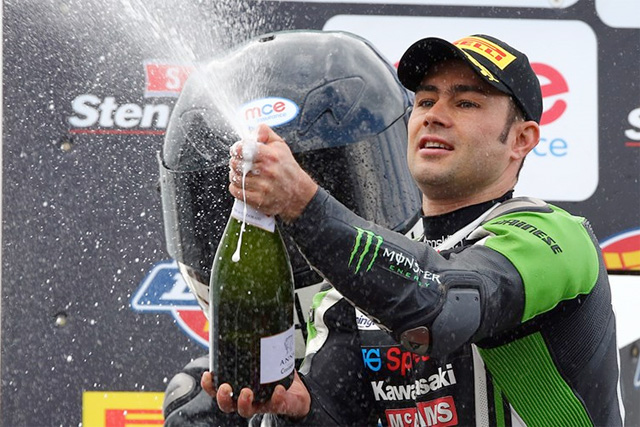 Leon Haslam returned to the top step of the MCE Insurance British Superbike Championship podium in the opening race of the day at Oulton Park, holding off a last lap attack from Christian Iddon by just 0.103s to score his first victory in the series since 2008.

At the start of the race his team-mate James Ellison had launched off the line to lead the pack from Honda Racing‰Ûªs Jason O'Halloran and Dan Linfoot plus Jack Kennedy on the Team WD-40 Kawasaki with Haslam holding fifth from his pole start.

Haslam was instantly ready to fight and he made a decisive move on Kennedy into Lodge on the third lap to move closer to his first podium finish of the season after a tough opening weekend at Silverstone. A few laps later and the JG Speedfit Kawasaki rider made a repeat move on Linfoot with the pair incredibly close as they crossed the line.

At the front Ellison had been pushing to build an advantage but by mid-distance the chasing pack had closed in with Haslam now at the front of the second group with Linfoot and O‰ÛªHalloran in close contention. Iddon had also found more pace and tagged onto the group as the battle for the podium intensified.

By lap 13 Linfoot was ready to make his attack and moved ahead with a pass on Haslam on the run through Island, as Ellison dropped to third behind his team-mate. The Honda Racing rider had begun his final charge, but a mistake at Hizzys cost him dearly as he crashed out of the lead just two laps later.

That left Haslam to lead the pack from Iddon and Ellison who had O‰ÛªHalloran for company in the fight for the top three. The race winner would come down to the last lap and Haslam held the initial advantage, but Iddon was pressing hard and the pair almost collided at Island as they pushed to stay ahead.

Iddon tried everything possible but it was Haslam who held the slight advantage out of Lodge for the final time to score his first victory of the season.

"It feels great to have won that race. When I was behind, I felt comfortable with where I could push and where I could gain, but as soon as I got to the front I felt like I was being way too cautious. When Dan was in front, I knew I needed to find a way past, to have a little push." Haslam said

"Then he crashed and I thought ‰Û÷I‰Ûªm ok now, I‰Ûªm in the lead again‰Ûª then suddenly Christian was pressuring me all the way to the line. I did keep running wide in a few places like Island, and I just missed that dry line into the last bend on the last lap too. I really expected him to beat me to the line, but I was able to make it stick.

"As I braked into Shell, I just saw the front of his fairing, and it shocked me ‰ÛÒ I expected him to come up the left side and not there! I need to give a big credit to my team though. They‰Ûªve worked their arses off all winter, and to start to win now is good. We can start to push on from now."

Richard Cooper celebrated his first MCE Insurance British Superbike Championship race win in style with a gritty performance in race two to hold off a hard-charging Christian Iddon on the final lap to sure the victory for Buildbase BMW in a race of attrition.

A rain shower before the start of the race left the teams and riders gambling on tyre choice and that would prove to be crucial with the track drying throughout the race. At the start Dan Linfoot had hit the front of the field, eager to make amends for crashing out of the lead in race one, with Jack Kennedy and Alastair Seeley in close contention.

Seeley‰Ûªs race was soon over though as the Royal Air Force BMW rider crashed out on the second lap on the exit of Shell Oils corner, but Cooper was already on the charge and he grabbed the lead after making some decisive passes on the second lap.

Cooper was then holding his position in the lead but Iddon was closing him down at a rapid rate with Kennedy holding third place until the JG Speedfit Kawasaki pairing hunted him down after Leon Haslam and James Ellison had moved up the order when their choice of slick tyres paid off mid distance. Linfoot though had a double disappointment at Oulton Park when he crashed out on the exit of Shell Oils corner on the eighth lap.

By lap eleven Michael Laverty had thrown himself into contention; moving up to third place, behind the leading pair of Cooper and Iddon, but ahead of the quarrelling JG Speedfit Kawasakis of Ellison and Haslam who were embroiled in their own battle of supremacy and by lap 13 the pair were almost swapping paint in their quest to head the team charge.

At the front Iddon, running intermediate tyres, had hunted down Cooper, who had opted for a front wet intermediate tyre and a rear slick, and waited until the last lap to make his move; the Tyco BMW rider had taken the lead at Cascades and was desperately trying to defend as the pair both aimed for their first race victory in MCE BSB. A moment on the exit of Hizzys chicane didn‰Ûªt stop Iddon from holding the lead, but he drifted marginally wide on the exit of Lodge and it was enough for Cooper to win the drag to the line.

The battle for third was equally intense with the JG Speedfit Kawasakis taking the fight all the way to the finish with Haslam emerging ahead as they crossed the line for the final time to return to the podium after securing his first race win of the season earlier in the day.

Laverty claimed fifth position on the second Tyco BMW as Be Wiser Ducati pairing Shane 'Shakey' Byrne and Glenn Irwin in sixth and seventh respectively. Jason O'Halloran dropped back to eighth position after an early charge with Kennedy and Stuart Easton claiming their first top ten finishes of the season.