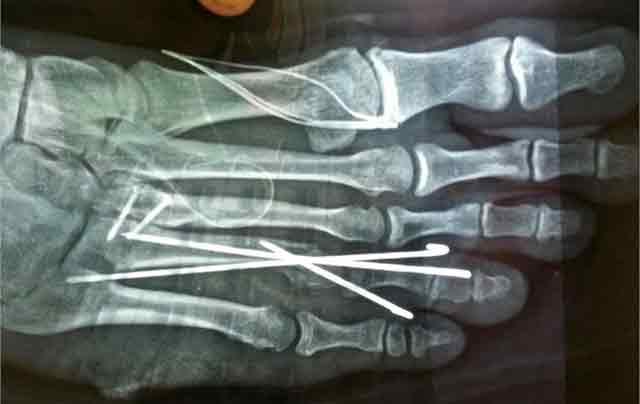 FIXI Crescent Suzuki's Leon Camier has returned to the Intercity Istanbul Park circuit following a successful operation on Friday evening to repair the broken bones he sustained in the first day of practice for the Turkish round of the eni FIM Superbike World championship.

Camier crashed at high-speed early-on in yesterday's first free practice session and after a preliminary diagnosis at the race-track he was transferred to a local hospital for an in-depth examination.

The scans showed seven fractures to his right foot and an operation was needed to stabilise the injuries so that Camier could begin the healing process. He also has a hairline fracture to the right ankle and severe contusions to his left elbow from the crash.

The Englishman underwent a 90-minute operation in which three of his Metatarsals were pinned, screwed and wired. Camier was discharged from hospital this morning and returned to the circuit to be with the rest of the FIXI Crescent Suzuki team.

"I am obviously really disappointed with what happened yesterday and frustrated that I now have to miss some races," Camier lamented.

"As far as the crash goes, I knew the grip was bad and I was riding accordingly in the conditions. I went through the first left-hander at the top of the hill and the rear just came round on me off the gas - I was really not expecting it to happen! It has left me with seven fractures in the foot and I've got wires, pins and screws in there.

"It was an intricate operation and the surgeon made sure he did the best job he could. We now have to work out how to get the best rehabilitation for it and I'll be pushing as hard as I can to come back for Jerez," he concluded.

He will now fly back to his home in Andorra to begin a thorough rehabilitation schedule in an attempt to regain his fitness, with the aim being to return for the final race of the season at Jerez in Spain on Sunday October 20th.