Laverty takes a double at Istanbul 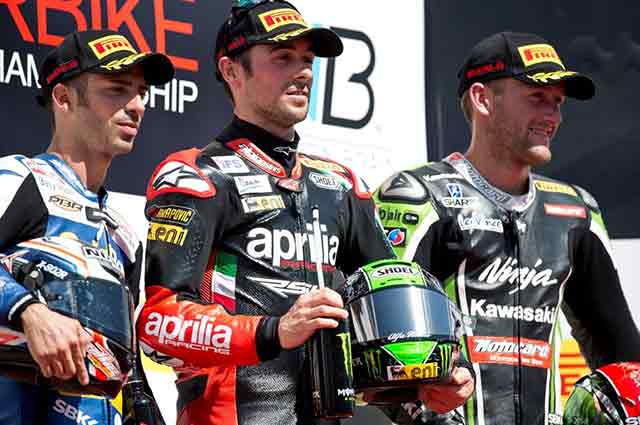 Ireland‰Ûªs Eugene Laverty was the star of the show in the round 11 of World Superbike Championship in Istanbul over the weekend, taking victory in the world supers and ensuring the title chase heats up for the final three rounds.

Eugene Laverty (Aprilia Racing Team) made a clean sweep of the competition by winning both races and narrowing the gap to Tom Sykes to 26 points. The Kawasaki Racing Team rider was third and second at the flag and leads the championship on 323 points.

Frenchman Sylvain Guintoli (Aprilia Racing Team) and Italy‰Ûªs Marco Melandri (BMW Motorrad GoldBet) got one podium finish each, but lost some ground in the title chase, which sees them now sitting 8 and 33 points short of the leader

‰ÛÏMy previous double-win was at Monza in 2011, but this one has a special meaning because it was totally unexpected," Laverty said. "I am very happy as my bike was perfect, even better in the second race ‰ÛÒ despite the similar pace- as I could make the difference in the final stages. I'm back into contention for the title, but most of all I regained confidence and that gives me great hope for the next rounds.

Championship leader Tom Sykes started from pole and took his KRT Ninja ZX-10R to a third and a second place in the two 18-lap races, extending his championship lead to eight points after 11 rounds. 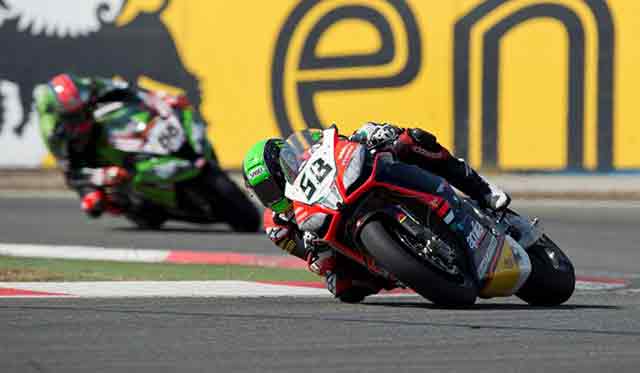 Eugene Laverty took the double in Turkey. Credit: 2Snap
Sykes led both races and battled hard to try and win each one. He was 3.432 seconds from the winner in race one and only 1.708 seconds from double race winner Eugene Laverty in race two.

Crucially, at this advanced stage of the year, Sykes beat his closest rival Sylvain Guintoli each time and he now leads him by eight points, gaining seven points on him this weekend.

‰ÛÏTwo podiums today even though it was the first time for me here. We made two or three changes to the bike between races and I think everybody saw that our bike was working a bit better in the second one," Sykes said.

"We started that race quite strongly and I was able to lead again but some of our competitors were using the tyres a little bit better. Unfortunately I did not have the package at the end of the second race to fight back and try to win it. I believe that we can learn and improve from this weekend."

The eni FIM Superbike World Championship will resume at Mazda Raceway Laguna Seca in two-weeks time, while Supersport will be back on track early next month at Magny-Cours.

Marco Melandri (BMW Motorrad GoldBet) was in the mix, taking second in the opening race and fourth in the second and now sits 7 points behind Laverty in the chanpionship standings.

Moto2 rider Toni Elias (Red Devils Roma Aprilia) amde a strong debut in the class for 2013 with a fifth and sixth place finishes.

The eni FIM Superbike World Championship will resume at Mazda Raceway Laguna Seca in two-weeks time, while Supersport will be back on track early next month at Magny-Cours.