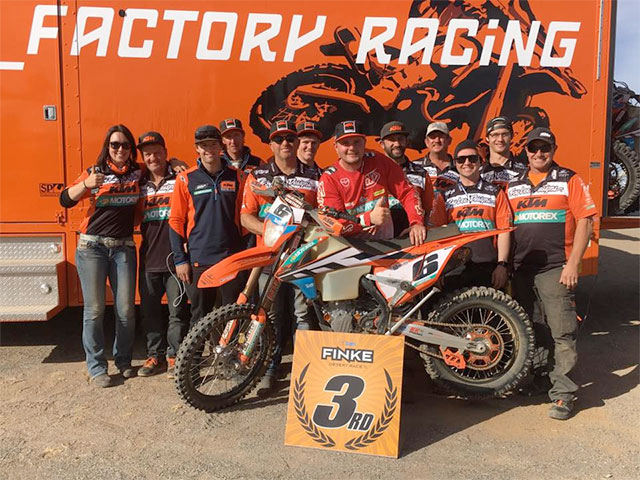 The harsh luck of the desert has robbed KTM‰Ûªs David Walsh of a very likely-looking maiden victory in the weekend‰Ûªs Tatts Finke Desert Race, after he was forced to withdraw during Monday‰Ûªs return leg to Alice Springs.

With the orange brand shooting for its fourth successive win in the annual 480-kilometre, two-day Northern Territory epic, early blows were suffered with the withdrawal of five-time champ Toby Price two weeks back, and the injury to promising open class rookie Jack Simpson last Friday.

Regardless, the team was well on track yesterday when Prologue winner Walsh became the only rider to push under the two-hour mark on the away leg, setting a blistering 1:58:04 on his KTM 500 EXC-F.

He arrived at Finke for the overnight camp with a buffer of over five-and-a-half minutes over Stokie ‰ÛÒ despite riding the last 20 kilometres on a flat rear tyre!

The 27-year-old carpenter certainly looked to be on the very cusp or carving a new legend into the Finke record books, when a technical issue caused his machine to lose power, and he was out.

"It‰Ûªs just motorsport.," David Walsh lamented, "I can‰Ûªt really say much except a big thank you to the team for all their hard work ‰ÛÒ they worked tirelessly and they‰Ûªre all great blokes. Without them I wouldn‰Ûªt have been at the pointy end to begin with.

"My run down yesterday was really smooth. I got a flat tyre with about 25 kilometres to go and I had to ride in on a flat, which probably cost me a minute or two, but otherwise it was no problem.

"The track was very rough towards the end. You never got a break or a chance to sit down. So, I was pretty shocked to be under the two-hour mark," Walsh concluded. 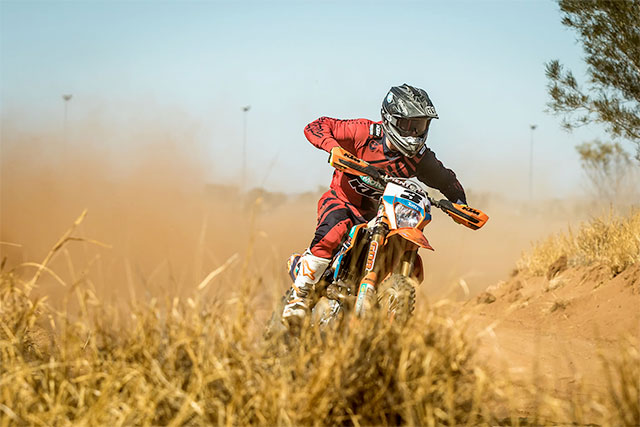 David Walsh lead the opening stage and looked set for the win with a large lead until a mechanical DNF robbed him of what looked to be a certain victory. Credit: Dirt Action
Luke Hayes‰Ûª goal was to beat his last year‰Ûªs finish of sixth outright, and with his last-minute upgrade to Price‰Ûªs vacated KTM 500 EXC-F, the 22-year-old primary school indigenous student assistant exceeded his goal - right onto the Finke outright podium.

"I‰Ûªm absolutely stoked to be on the podium," Hayes enthused. "It‰Ûªs been a long time in the making. I was sixth out of Alice because Josh Green beat me off the start, and left Finke in third and came home third. The run down was pretty wild. I was in dust for about 120 kilometres and I had a handful of big moments just fighting through it, but the way home was much better. I had a bit of fresh air in front of me and a bit of leeway behind me, so I just focussed on stringing together a nice clean run and just wanted to make sure I got home safe and sound.

"I‰Ûªm cut for David," Hayes added, refering to his team-mates DNF, "I was really disappointed to see him by the side of the track and I think he really deserved to be on the top step of the podium this year.‰Û 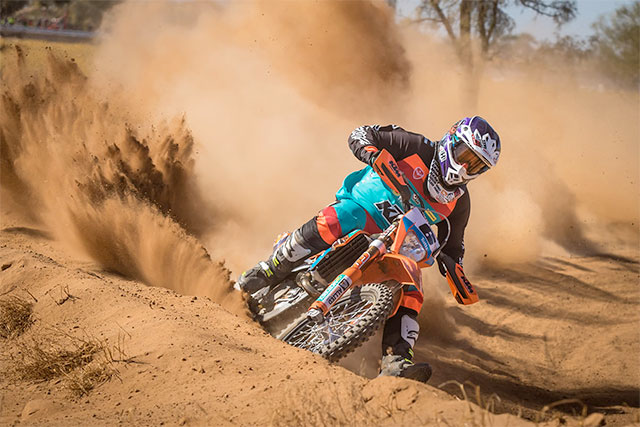 Luke Hayes had his best finish with third place. Credit: Dirt Action
Twenty-three-year-old Victorian farmer Nathan Trigg used his 2017 KTM 300 EXC to defend his 251cc and above 2T class title in the boldest possible terms, incredibly winning by more than an hour over the KTMs of Benjamin Russell and Samuel Handley.

"I wanted to ride a little bit faster on the way down, but I lost a Steg Peg after the first fuel stop and it made it really hard in the big whoops in the middle of the track. But then we fixed everything up and had a good run home. I passed Jacob Smith, and I was still pushing really hard there and I came in only about a minute behind Sam Davies. The 2017 KTM 300 EXC was crazy good. A lot faster, a lot more top speed and with the Track shock it made it a lot faster through the whoops, and on the flat ground the top speed was a good 20kph faster I think.‰Û 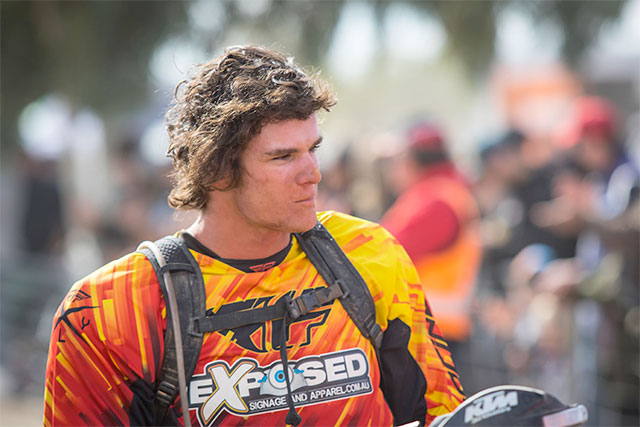 In the Masters 35 to 39 Years, Michael Burgess triumphed over Anthony Hanlan and Simon Drew.

The KTM Managment team put a huge effort into the Finke each and every year and while delighted as usual with the Orange brands results and team effort they still felt for David Walsh and the one that got away.

‰ÛÏWe had a very strong preparation, as we always do, and didn‰Ûªt compromise anywhere," Jeff Leisk, KTM General Manager, explained. "We certainly thought we had all our bases covered, and the configuration of our bike was proven many times over prior to the event.

"Until we pull the bike down we won‰Ûªt know what happened, but from a personal perspective, I just feel for David. He really prepared and committed himself in the most outstanding way for the event, and I feel more for him than any of us. We just have to stick together as a team and come back stronger next time, that‰Ûªs all we can do.

"At the end of the day, they‰Ûªre all home safe and sound, and that gives us a platform for the next one. Luke stepped into some other shoes here and took on the responsibility when Toby couldn‰Ûªt compete, and to put the bike on the podium was outstanding.

"Finke is a huge endeavour for KTM. There‰Ûªs probably 40 or so people on the race weekend, but Glenn Kearney and the techs put in so much grunt work beforehand when there‰Ûªs no-one around, no fanfare. They‰Ûªre just out in the desert testing for the race. We have a lot of people volunteer their time to help our team too, manning fuel stops and providing support and camaraderie. A big hats-off to them because we just couldn‰Ûªt do it without them either, they‰Ûªre all part of our team," Leisk concluded. 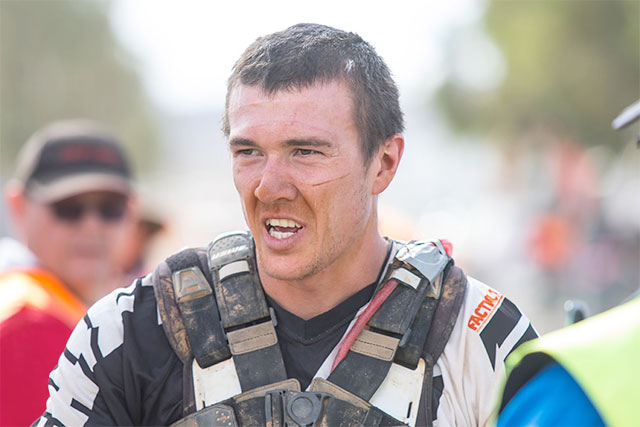 Kent Collins, rounded out the 451cc and above 4T class podium. Credit: Dirt Action
Team Manager, Glenn Kearney, added, ‰ÛÏGutted is the word that best describes it. There was nothing else we could have done with our prep. I was the chopper above Walshy and we were doing segment times on him, and his first segment out of Alice was quicker than Toby‰Ûªs time in that first sector last year, so we knew right from the start that everything was on track. The trip down was pretty well flawless until Walshy got that flat tyre with about twenty odd kays to go, but even then, he still came in with that 5-minute-forty lead - riding on a flat!

"For it all to just come unfolded straight away on the return run was so disappointing. I feel gutted for Walshy, he‰Ûªs put in so much work, just like the 35-40 of us up here, not including the people back in Sydney ‰ÛÒ but what do you do? That‰Ûªs racing.

"Luke‰Ûªs had his career-best finish, and equalled the finish of his old man a few years ago, so that‰Ûªs pretty cool. At the start of the year we were helping him out as support guy, and he‰Ûªs ended up being the lone soldier for us.

"It‰Ûªs been a tough hit-out this time around. We started out with Tye and lost him, and then Toby wasn‰Ûªt healthy enough, then Jack got injured last week, and on the return run today we‰Ûªve lost Walshy. But sometimes, that‰Ûªs how the cards are dealt. We‰Ûªll learn from it and move forward.‰Û