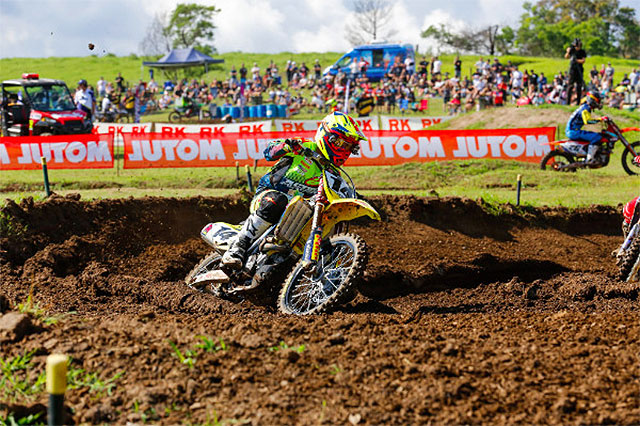 Wilson Coolair Motul Factory Suzuki‰Ûªs Kyle Peters showed further impressive speed despite being forced to contend with bad luck on track at Round 2 of the Motul MX Nationals at Appin over the weekend.

Peters qualified in fourth position and transferred into his first GoPro Superpole for the season at Appin where he posted the third fastest time (1:44.886), however despite proving his pace in qualifying, when racing kicked off the American became the victim of the deep rutted and treacherous circuit.

The Suzuki rider went on to post 7-10 results across two races on Sunday, placing him in ninth overall at the conclusion of his second outing as a full-time Motul MX Nationals competitor.

Peters secured the holeshot in moto one for the MX1 class, however dropped back to seventh position after getting caught in one of the deepest ruts on the track, damaging his radiator forcing him to nurse his Suzuki RMZ 450 to the finish line.

In race two Peters looked to redeem himself, however was caught in the carnage of another rider off the start - Peters then re-joined the race at the rear of the pack before clawing back positions, eventually salvaging tenth.

‰ÛÏIt was a bit of a weekend to put behind us to be honest. In moto one I busted my radiator in a rut and it was spraying me with coolant the whole race so I had to really nurse the bike to the finish line,‰Û