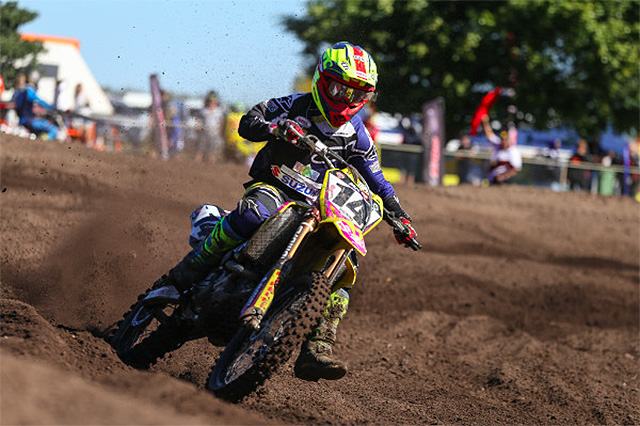 In his final rider with Wilson Coolair Motul Factory Suzuki, Kyle Peters wrapped up the 2017 Motul MX Nationals series in sixth position in the championship standings despite enduring a difficult final round at Coolum over the weekend.

With American Peters competing in his first Australian Motocross season aboard the factory Suzuki RM-Z450 machine, the young rider experienced highs and lows throughout the 2017 series, however finished with solid points after managing a top ten finish over the weekend.

Peters qualified in 11th position on Sunday morning, withstanding harsh winds and difficult conditions on the Coolum Pines MX circuit. Then when racing got underway the Suzuki rider delivered the team with 7,8 race results and concluded the round in 7th overall. Peters also finished the 10-round motocross season in 6th in the championship standings on a total of 478 points.

‰ÛÏThe final round at Coolum was not exactly the way I had hoped I would finish the season, but I'm pleased that we got through healthy and I'm looking forward to the future," Peters shared.

‰ÛÏI'm super grateful and blessed to have had the opportunity to come and race here in Australia. This is something I've wanted to do for a long time and I just wish it could have lasted longer.

‰ÛÏAt this stage I'm planning on returning home, reassessing and then seeing what the future holds.

"I can't thank everyone in my corner enough for their continued support and for making what has been a difficult race reason that bit easier.

"I have loved being out here in Australia, and hope to come back and race again in the future."

Wilson Coolair Motul Factory Suzuki and Kyle Peters will now part ways at the conclusion of the 2017 MX Nationals series.

Following a challenging season and transition to the Australian racing scene, Peters will return home to the United States and will be released from his contract immediately.

"We thank Kyle for his time and effort he spent with the team, its unfortunate that things did not work out as planned, however we respect his desire to return home and we wish him good luck for the future," the team stated

A replacement rider for the 2017 Australian Supercross series will be announced in due course.