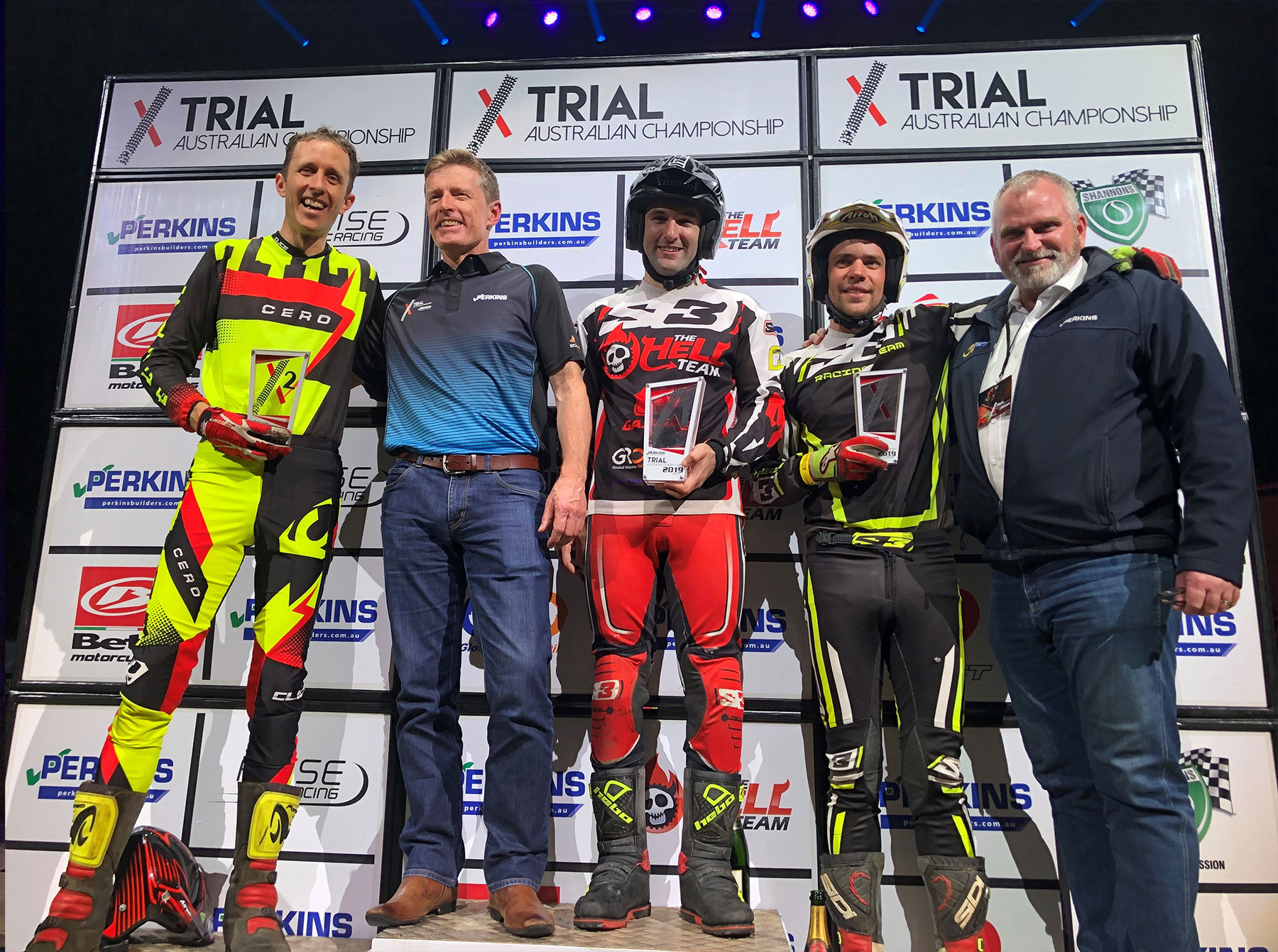 Now three-times champion Kyle Middleton made the impossible possible with Neil Price (second) and Chris Bayles (third) pushing him (up and) over the edge.
Kyle Middleton has achieved the seemingly impossible to claim his third consecutive WA XTrial Australian Championship Victory.

When the first two competitors, WA Sherco rider Craig Austin and Gas Gas rider Colin Zarczynski (NSW), both crashed only meters into the first section of the qualifying round of the XTrial Australian Championship, event founder and organiser, Neil Price, started to feel a little nervous.

Nervous because he may have made the W.A. round of the championship a little more difficult than he should have. And nervous because it was his turn to ride it next.

‰Û÷Do unto others‰Ûª Neil‰Ûªs mum had always told him. Well, he had ‰Û÷done unto‰Ûª not only Craig and Colin, but the other three riders in qualifying: Tasmanian Chris Bayle, New South Welshman Keven Zarcynski and current multiple Australian trials champion Kyle Middleton, also from NSW. And in doing so he had undone himself, crashing off the section only meters from the end. This was just the beginning of a torturous evening that broke bikes, fractured bones and even eroded the resolve of some of Australia‰Ûªs best trials bike riders.

Six riders faced off against each other and against five of the most difficult sections of obstacles ever constructed in an indoor arena-style motorcycle event. So ominous were some of these sections that two riders opted to abort one entirely during qualifying.

The WACO Kwikform Scaffolding towers had the riders hopping up onto platforms in excess of 4 metres off the ground, before launching themselves across a three-metre chasm only to have to pull up on a platform not much wider than their bikes are long. This was a section where the crowd so desperately wanted to look away but could not. 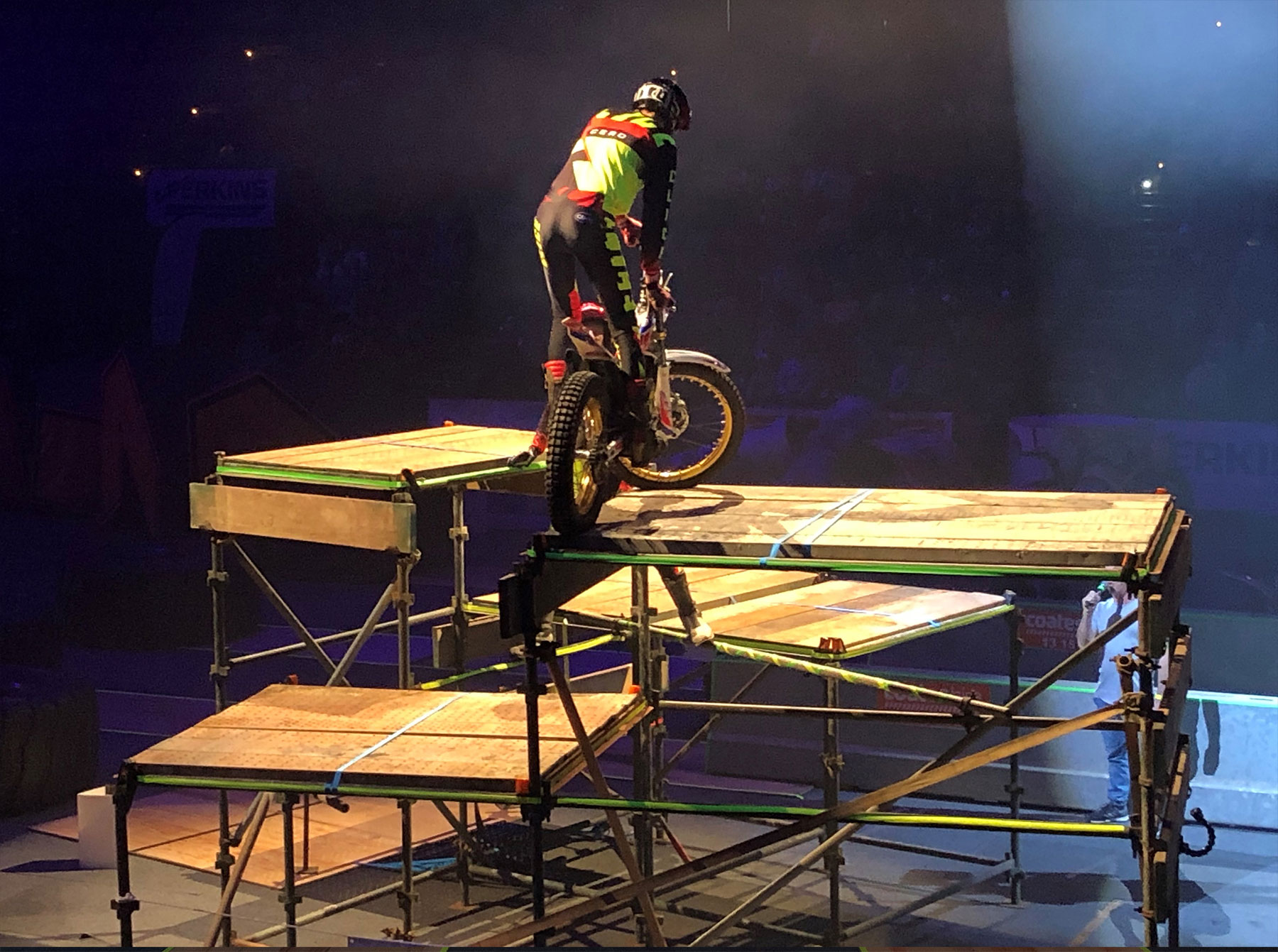 That ‰Û÷look away‰Ûª moment as West Aussie Neil Price teeters on the edge of insanity
At the end of qualifying few of the riders had successfully completed each of the five sections and after only a half-hour break the top four, Chris Bayles, Kyle Middleton, Kevin Zarcynski and Neil Price, were invited back into the arena to do the course again; in reverse. And so began, quite literally, a race to the wall.

Appearing in the X Trial Australian Championship since its inception, the notorious Sevens section (curiously placed last in the order of obstacles to be ridden by course designer, the evil Mr Price), had never been successfully completed in reverse over the four years the event has been staged. Well, the fans in Perth could not possibly have imagined a better finish to the event when 2017 and 2018 XTrial champion Kyle Middleton and home-grown hero Neil Price went toe to toe and tyre to tyre on this final section.

Neil went first. During qualifying and riding it in the other direction (the easy way), the Sevens spat Neil and his Beta onto the floor like a cowboy spits tobacco cud and, in doing so quite likely fractured his ankle. But Price rode back onto the Sevens like a man possessed and charged hard right up until he hit ‰Û÷that wall‰Ûª. Neil twisted the throttle until the Beta screamed, dropped the clutch and launched his vertical assault, but it was to no avail. Down he went.

Literally chewing their skin off their knucklebones, the Perth crowd knew what this meant. If Kyle could do what no rider has done before, the W.A. round of the championship was his!

And he did. The Perkins Group of Companies brought the X Trial Australian Championship to HBF Stadium on a freezing night in July 2019, and they could not possibly have backed a hotter event. When Kyle launched up and over a virtually impassable obstruction the crowd went bonkers. The W.A. round was over, and Kyle had achieved a trifecta of wins: 2017, 2018 and 2019.

Limping like a wounded soldier but smiling like a five-year old with a double scoop soft-serve Neil Price was stoked with second, pushing the Taswegian Chris Bayles one step further down the podium to third. But it is not over yet.

Next Saturday the riders take their cache of points to Wollongong and do it all again. One slip and Kyle‰Ûªs lead could be on its ear. Can the Tassie devil claw his way to the top? Will Neil even be able to ride given he currently struggling to walk? In a week we will know. 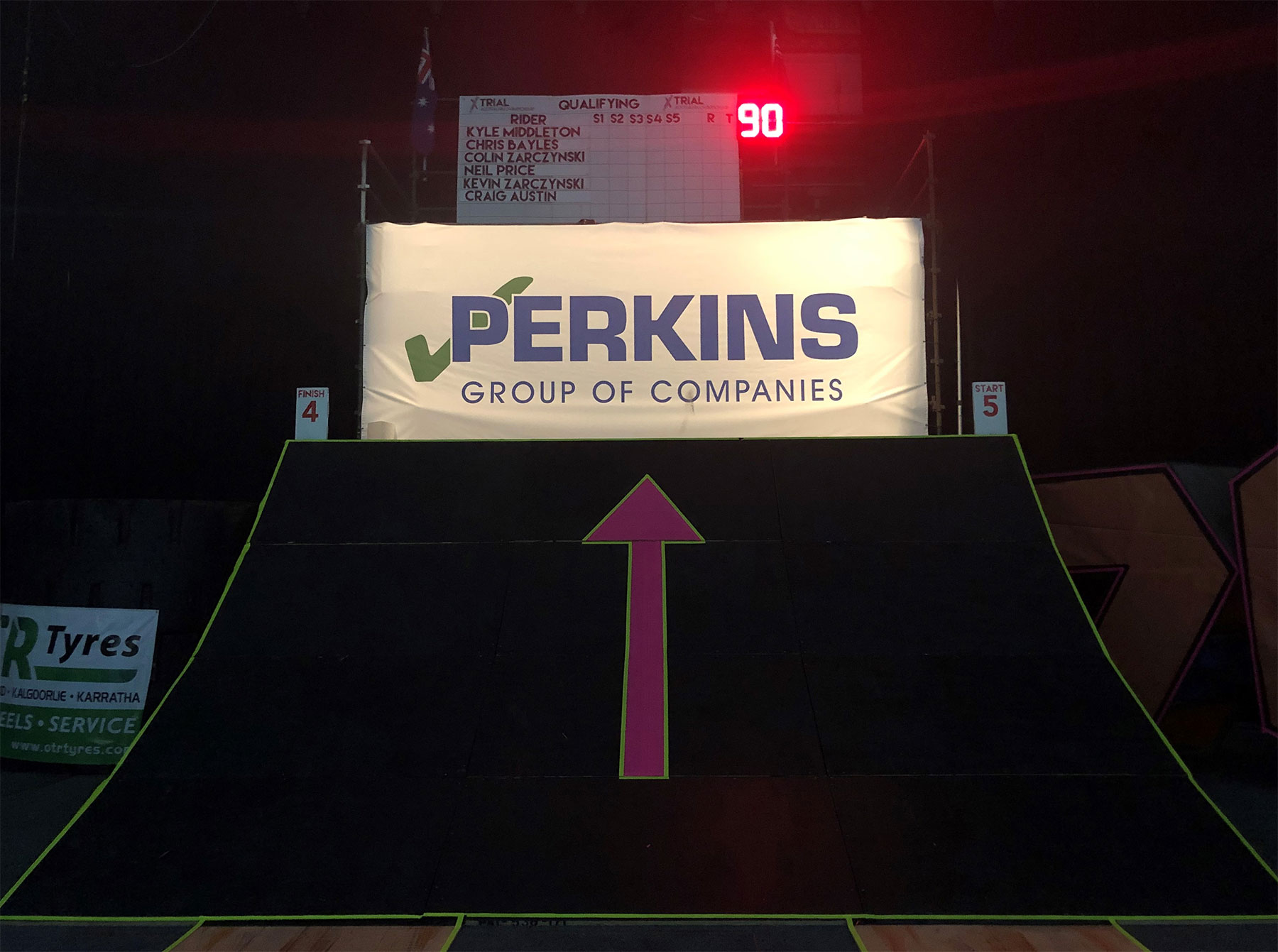 The only way is up for the XTrial Australian Championship