Benavides' win was enough to secure the Monster Energy Honda Team rider second overall while Australian Toby Price finished second on the final stage to cement his place on the podium with third overall.

Walkner has unquestionably put in a champion‰Ûªs performance. The former FIM Cross-Country Rallies World Champion has ridden intelligently from the very first stage, finding the right balance between out-and-out speed and error-free navigation. Stage 10 was again a game-changer in the rally with Walkner ending the day with an almost 30-minute advantage over his nearest competitors.

In reaching the finish of today‰Ûªs final stage in eighth position, Matthias was finally able to relax and celebrate a well-deserved win and let his historic achievement sink in.

"It‰Ûªs unbelievable - I can‰Ûªt describe how it feels," Walkner said. "This year‰Ûªs Dakar has been so difficult, easily the toughest rally of my career. Navigation has been tricky pretty much every day. At the beginning of the race, all the top guys were so close with not much time between us. I just tried to keep on doing well each day without making any mistakes. Things were so tight right up to my stage victory. After that I aimed to finish each day safely and get to the end of the rally without losing my advantage. Luckily the tactics worked out and I‰Ûªm here at the end now as the winner and it feels unreal. Thank you to my team and everyone that has supported me ‰ÛÒ we did it!‰Û 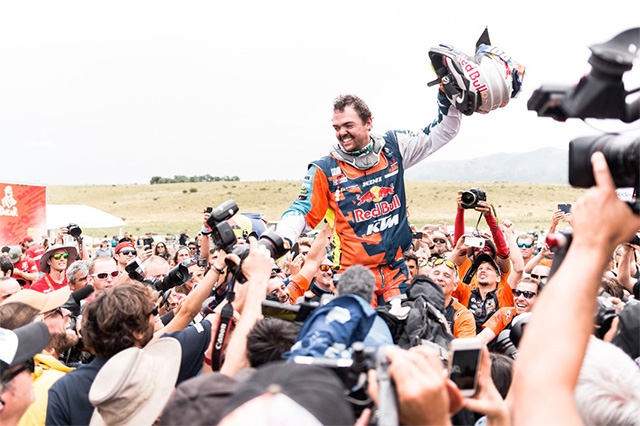 Matthias Walkner claimed the 40th edition of the Dakar and KTM's 17th motorcycle class win. Credit: PhotosDakar.com
The final fourteenth stage of the 2018 Rally Dakar was resplendent with the colours of the Monster Energy Honda Team, who claimed the final stage victory at the hands of Argentinean rider Kevin Benavides, sealing the overall runner-up spot in the process. Another success for the team in the Dakar Rally, equaling the same feat of Paulo GonÌ¤alves in 2015.

"It‰Ûªs been a great Dakar. I‰Ûªm really happy and I felt great," a relieved Benavides said at the finish line. "It‰Ûªs been really tough. We fought right up until the end. We always had a great strategy. We were always on the podium and were even leading the race at one point. It‰Ûªs a shame about what happened in stage ten, but we have to keep looking forward. We‰Ûªve finished second overall and we have won the final stage, which we knew we could." 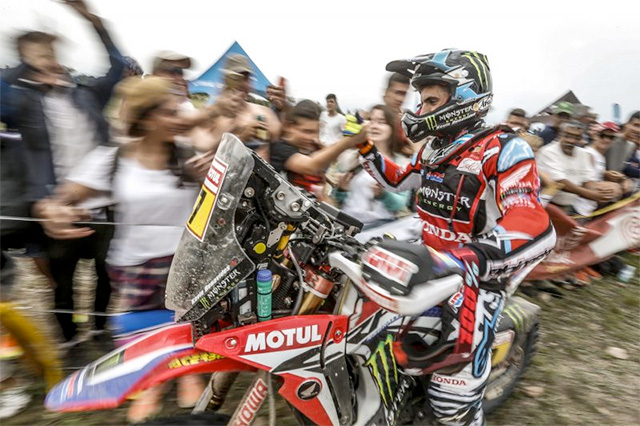 Kevin Benavides equaled Honda's best result with a final stage win and second overall.
Finishing as runner-up on today‰Ûªs stage, Toby Price did everything he could to close down the gap on the riders in front of him. Playing catch up following an unfortunate navigational error earlier in the rally, Price‰Ûªs speed in the final stages of the event have been phenomenal. His result today secured third place in the overall standings, an amazing feat considering the 2018 Dakar is the Australian‰Ûªs first competitive outing since injury forced him out of the 2017 event.

‰ÛÏThe final stage is over and it went really well. I‰Ûªm happy to get to the finish line, that was always the main goal right from the start," Price said. "I tried to push today to make up the time on Kevin (Benavides) but halfway through I knew five minutes was just too much and so I just aimed for a safe finish. To finish the Dakar is an achievement in itself, to come away at the end of this year‰Ûªs race with a podium is unbelievable, especially after the year I‰Ûªve had. The whole team have come together and worked so hard, none of us could do it without them. I‰Ûªll concentrate on the 2018 season now and try to get a little stronger and come back here next year looking for the top-step.‰Û 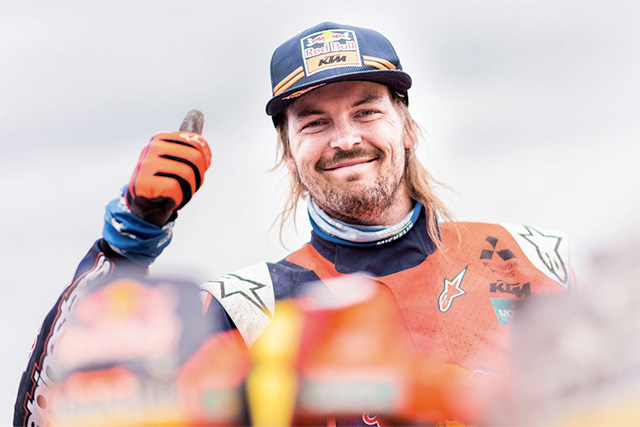 Aussie gun Toby Price went close to a win in his return event but in the end was happy to have finished and in third overall was an impressive finish after spending a year on the sidelines. Credit: PhotosDakar.com
Similarly to his team-mate, Antoine Meo‰Ûªs 2018 season has been plagued with injury. Coming into the Dakar the Frenchman‰Ûªs goal was simply to get to the finish. Two stage wins and a successful rally later, Meo has placed an impressive fourth overall after securing third on the final stage, a great achievement considering the difficulty of this year‰Ûªs event.

‰ÛÏI am so happy to complete the race in one piece," Meo said. "Today was difficult, not because of the length of the stage but because we had to wait around a bit and it was hard to maintain concentration. I tried to push early on, but after making a small mistake I caught a truck in an awkward part of the track and lost some time stuck behind him. I had a couple of crashes this year but nothing too bad. I‰Ûªm happy with how things have gone and would like to thank the team for getting us through it this year.‰Û 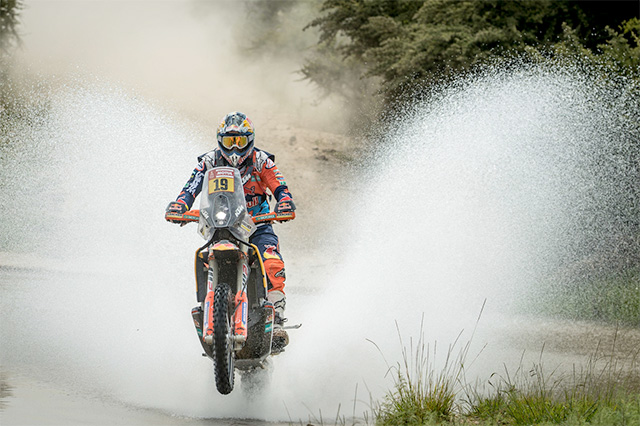 Antoine Meo ‰Ûªs 2018 season was plagued with injury but 4th overall was a top result in the end. Credit: PhotosDakar.com
Himoinsa Team's Daniel Oliveras took his KTM to fourth in the final stage ahead of Hero Motorsports Team Rally rider Johnny Aubert was fifth.

Aubert ended the rally in sixth overall 50 minutes behind fourth placed Gerard Farres. For Hero MotoSports Team Rally, it was a particularly special day as they delivered their best ever Dakar performance, which is even more commendable given that it is only their second Dakar. Rookie calss winner Oriol Mena impressed one and all to deliver an excellent 7th position finish in his debut Dakar.

‰ÛÏI am really happy with my results," Mena said. "I enjoyed the last stage a lot and it felt as if these 120 kms were longer than my life. I am at the finish line and also won in the rookie class so it‰Ûªs a real good result and what can I say, dreams do come true‰Û 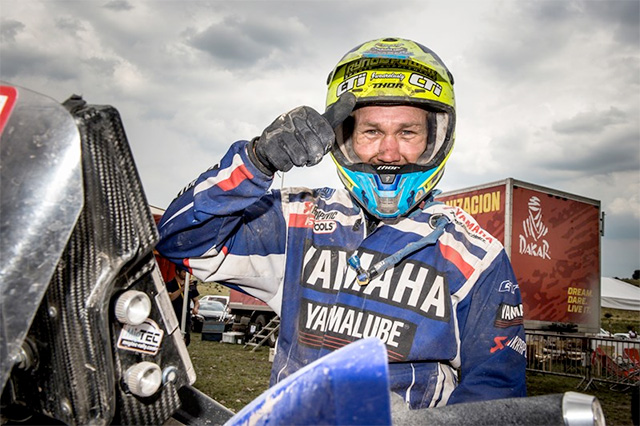 Aussie battler Rod Faggotter was the last man left at Yamaha and pulled off an impressive 16th overall.
It's mission accomplished for the Yamalube Yamaha Official Rally Team, who saw team rider Rodney Faggotter finish the final stage in 19th without any issues. With it he ended his 2018 Dakar Rally adventure with a positive 16th place in the event's final overall standings.

"The race is over and I'm happy I crossed the finish line," the relieved Aussie said. "Today we raced a shorter stage and it all went pretty well for me. The starting order this morning was reversed so we had to pay extra attention when passing riders in front. I am happy with my top 20 result for the day and with my 16th position in the final overall standings. It's been a long two weeks of racing and I'm happy to be here at the finish line. This has been a demanding Dakar so to reach the finish is a feat in itself. I really had a great time racing with the team here in South America."

In an amazing effort, considering he had no bike support and had to do all his own mechanical work, Aussie Scott Britnell finished the final stage in 64th place for an overall result of 61st. 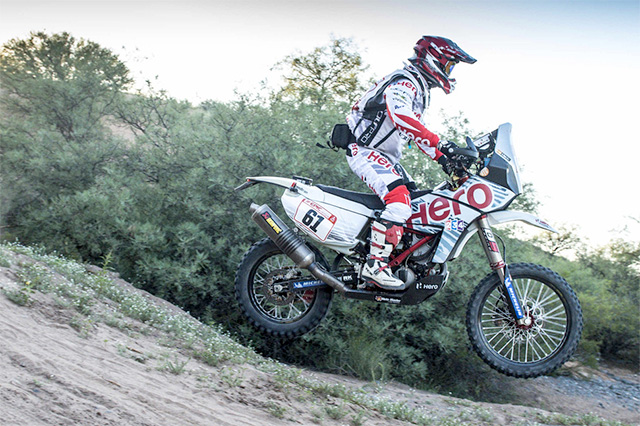