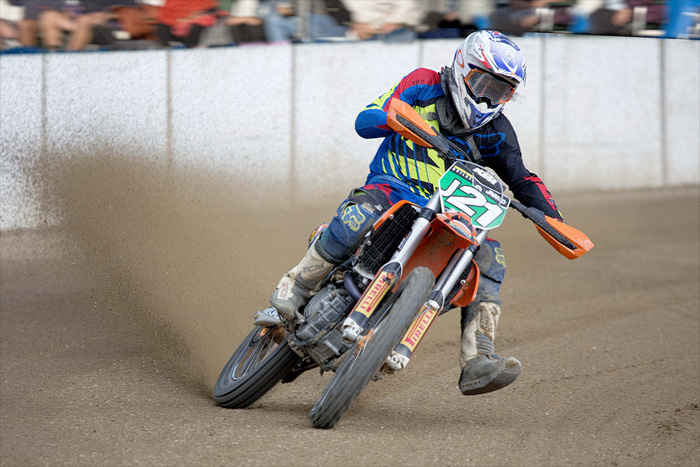 The 17 year old apprentice carpenter from Gympie made headlines back in April when he achieved an incredible 10 Queensland and New South Wales State titles across a one-month period, but Saturday was the first time he had tasted victory at the Australian Long track Masters.

At Bathurst, Brook powered his 2016 KTM 250 SX-F to a narrow victory in the Pro 250 class ahead of Ben Cook and Zach Cook then climbed aboard his 450 SX-F to win the Pro 450 crown from Zach Cook and Nick Waters.

In the Pro-Open he faced his toughest battle, trailing Michael Kirkness until the last corner of the last lap before executing a breathtaking inside move to take the lead and the victory ‰ÛÒ albeit by just .013 of a second!

"The 450 was pretty plain sailing after I got the holeshot and lead from there, and in the Pro 250, Ben Cook was right behind me the whole time and nearly passed me up the inside on one lap, but I held him off." Brooks reflected.

"The Pro-open was pretty exciting, it was a real close race. Mick was racing on a 500 two-stroke on methanol, and I was on the 2016 450, so it was pretty awesome to beat something like that.

"I was in second for the whole race until the last lap, but I was just making up a little bit of ground every lap. In the last corner I passed Mick up the inside, and the crowd was going off. I was stoked to get the win.

"My 2016 KTM is completely different to my last year‰Ûªs models. Different handling, and the power delivery is a lot smoother, which makes it easier to accelerate when the track gets slick by just not creating as much wheelspin.‰Û