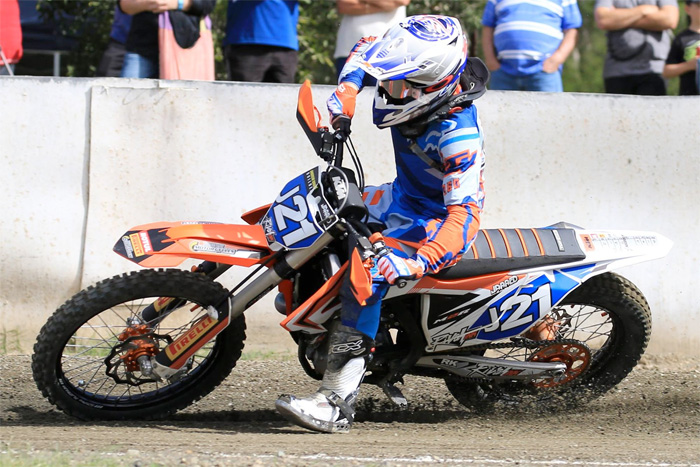 KTM Australia Factory Support dirt track racer rider Jarred Brook has his eyes turned to a debut ride in the US following his win in the weekend's Casey Stoner cup at Kurri Kurri, NSW.

Widely regarded as one of the hottest prospects in Australian dirt track, the 17-year-old apprentice carpenter from Gympie was unstoppable in the event‰Ûªs naming race, winning the 8-lap Casey Stoner Cup on his KTM 450 SX-F, ahead of Boyd Hollis and Max Croker.

Brook was on fire at Kurri from the start of the program, earlier powering his KTM 250 SX-F to victory in the 250cc Pro event ahead of Boyd Hollis and Max Croker. His worst result saw him slip no lower than second on the podium, with a 450cc Pro class runner-up finish behind Hollis and again ahead of Croker.

‰ÛÏIt was awesome to win the Casey Stoner Cup." Brook reflected. "I haven't been there since 2013 when I was a junior.

"I‰Ûªd been wanting to get back there for the last few years, and even though the numbers were down a little bit the quality was very high.

"I got a second in the Pro 450 won the Pro 250 and I won the Casey Stoner Cup (Pro Open). We had three heats, and then an eight lap final. In the heats I got a win and a couple of seconds to qualify behind Boyd Hollis, then in the final I got into the lead stayed there the whole race.

"My KTM450 was working a treat; we've had (KTM Racing Team technician) Danny Apro do the engines and suspension so we just have to do a couple of clicks to the suspension to suit any track where on.

Brook‰Ûªs next outing will be the New South Wales long track titles at Tamworth on May 14 followed by a visit to the Central Coast Cup, before a one-month trip to the US to race the AMA Dirt Track Grand Championships.

Stretching from July 1-6, the amateur event promises to test the breadth of any competitor's skill set, with a half mile, a TT, an indoor event and a one-mile event.

Brook hopes his debut international ride and first taste of the US professional scene will be a successful one, and lead to a return trip in the following months.

"The plan always was to do a full season in Australia as a senior on a 450 (last year) then travel, so we've been planning to go over since the start of the year." Brook added.

"I can't wait. Riding the different tracks and racing different people on a completely different set up to what we race on here will be pretty awesome. It'll be a lot of fun but definitely challenging.

"I don't really have any expectations - we are going over there to learn and have fun but a top 10 is what I'm aiming for. If I do okay am planning on going back again and doing a couple of rounds of the Pro series between August and November," he concluded.