KTM Support rider blast to their most successful weekend yet 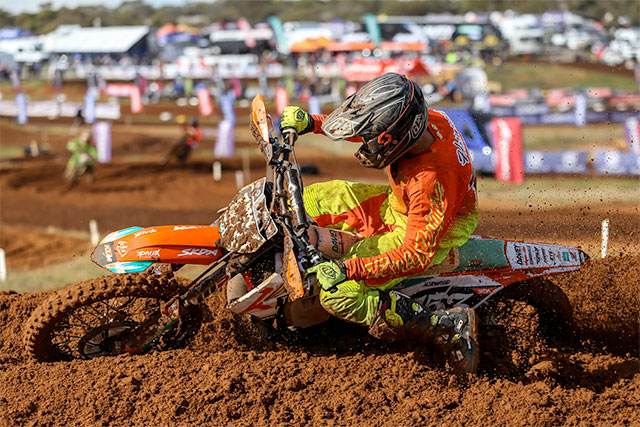 KTM support riders relished the sandy conditions of the weekend‰Ûªs fifth round of the Motul MX Nationals at Murray Bridge on Sunday, plundering the wins and podiums on their way to their most successful weekend of the year.

Davey Motorsport rider Hamish Harwood achieved his career-first win in the MX2 category at the South Australian venue, as he continued to leapfrog up the rankings into championship third position.

‰ÛÏFinally it all clicked together, we made a few changes to setup, got a good qualifying in and felt real good in the first moto. I came from behind in about fifth or sixth, and ended up getting the win after Mastin had a penalty when I was only three seconds off him at the end," Harwood recalled.

"In the second moto I kinda‰Ûª got off to slow start in about fourth, and the top two gapped us a wee bit, so I just sat in third and hoped that Mastin wasn‰Ûªt going to get to the lead," Harwood continued, "I still went out in MX1 and was actually having one of my better rides of the year, but I got a flat tyre. I rolled around to the finish, then in the last one I was a bit knackered so I just rolled around and got some good points, that‰Ûªs all. This is my first overall win and it felt amazing just to get it off my back, just to come out with some pretty good results, and I think they were pretty well deserved.‰Û 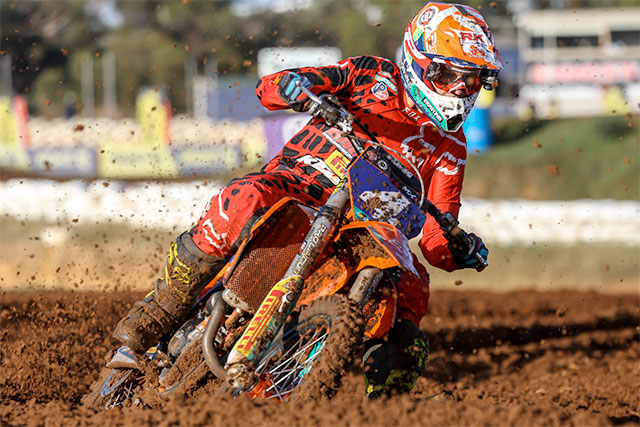 Mastin crossed the finish line first in moto one, but was relegated to third for deviating from the track when he ran wide at turn one, despite claiming to have actually lost positions in the process.

The pair was second and third in the final moto; Mastin battling with Evans at the head of the pack, and Harwood holding station in third on his way to the overall win.

‰ÛÏIt was a bummer of a day. I had a decent start in the first moto, but by the time I got out of the second corner I was up to fourth, and I got up to the lead just over half way through. I got the moto win, but straight afterwards I was told that I‰Ûªd been docked ten seconds for going off the track. I‰Ûªd holeshotted, but ran wide and lost like four positions but they still docked me ten seconds! Then in moto two I was second at the start and stayed there for the race," Mastin explained.

"Me and Mitch had a pretty good battle, but my roll-offs jammed up at one stage and I had to get off the back of him a little bit," Mastin continued. "It would‰Ûªve been awesome to get the overall but it was a pretty good weekend. It‰Ûªs pretty tight in the championship, with just a point between me in fifth and third place, and 34 points to the lead. The bike was awesome here, everyone at MX R&D had my bike and suspension running good. The two-stroke was definitely the best choice for Murray Bridge.‰Û 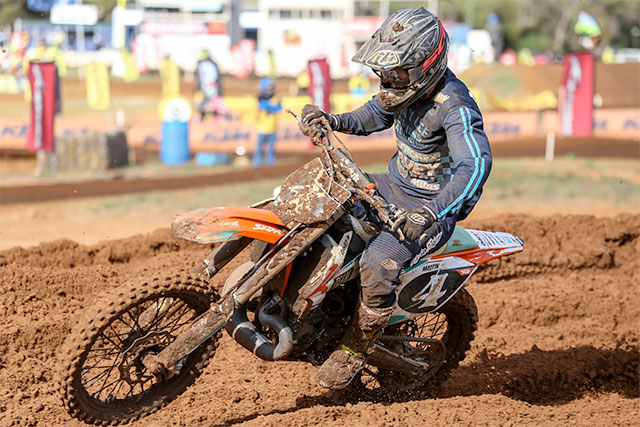 Egan Mastin crossed the finish line first in MX2 moto one, but was relegated to third for deviating from the track when he ran wide at turn one. Credit: MXN Images
Raceline KTM‰Ûªs Jayden Rykers finished ninth overall at Murray Bridge from 9th and 12th place finishes.

‰ÛÏI didn‰Ûªt feel like I rode the best here and my bike setup wasn‰Ûªt the greatest, but it‰Ûªs nothing we can‰Ûªt do better next time. Good to be up on the podiums but I want more so I‰Ûªm just going to keep working at it," Fogarty said,

"There‰Ûªs a few little races down my way, like Victorian titles, that I‰Ûªll do a couple of rounds of. Other than that I‰Ûªll just keep training as hard as I can to try and come back and win some races," Fogarty added.

Western Australian Regan Duffy gave KTM its second class win for the day when he sealed top honours in the 125cc Junior Cup Championship round. The KTM Junior Racing Team/Mandurah City KTM rider was unstoppable on his KTM 125 SX, winning both races.

‰ÛÏI qualified first, but you wouldn‰Ûªt believe it, I‰Ûªve jumped under a yellow flag again! I should have learned from my mistake, but hopefully I have now," Duffy lamented.

"Murray Bridge was awesome, I love the way the dirt forms up and it‰Ûªs got a good colour to it," Duffy said, "My bike was fast here and it got the job done. I changed suspension and I didn‰Ûªt have my holeshot button on the fork but I still managed top-five starts, and in the first moto I managed to duck down the inside and get to first by the second corner and run away with it. In the second I had to work for it, with Mason and Bailey in front of me, and I eventually got in front of Mason, then with a lap to go, got Bailey. Going into the last round at Coolum it‰Ûªs good to have a 12-point buffer in case I mess up! But I‰Ûªm from WA so I love the sand.‰Û 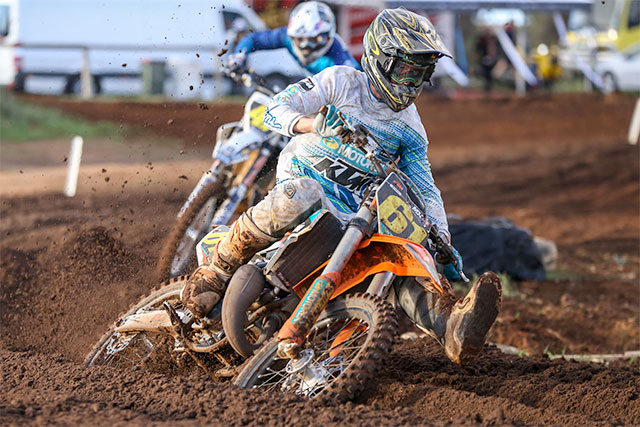