KTM Riders Carry Home A Bag Of Medals From AJMX 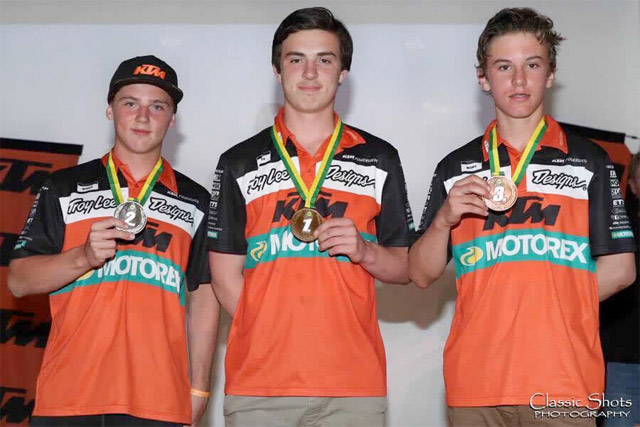 For the fourth year running, KTM Australia's sponsorship of the Australian Junior Motocross Championships has yielded a spectacular show of racing excitement and pointed to the promising future ‰ÛÒ despite a visit from some atrocious weather.

The Riverland club and its fantastic volunteers battled weather conditions so fierce that they warranted the cancellation of an entire day‰Ûªs racing, yet still presented a challenging Renmark track worthy of deciding Australia's newest crop of champions.

‰ÛÏThe club had a lot of challenges from the weather; there were cyclonic winds and some of the track was under water at one point." KTM National Brand Manager Tam Paul explained. "The whole week was very difficult in that respect.

"We had one complete day rained out which is no small obstacle to people running the program. A considerable amount of track work took place over the course of the event.

"Weather aside, there was some great racing, and a really challenging track - it's quite a challenging surface with the South Australian red dirt like they have at Hattah.

"After our rebuilding year last year it was a good one for our team with three championships and five other podiums. Mason was our standout rider, claiming two championships, closely followed by Rhys Budd who finished second in both of those classes, and then Regan Duffy gave us our KTM clean sweep twice! Noah Smerdon won his third consecutive Australian 65cc championship, and then Caleb got second on the 125. We‰Ûªre very happy we were well represented across all classes. I'd also like to thank our key partners, Motorex, TLD and Dunlop tyres.‰Û 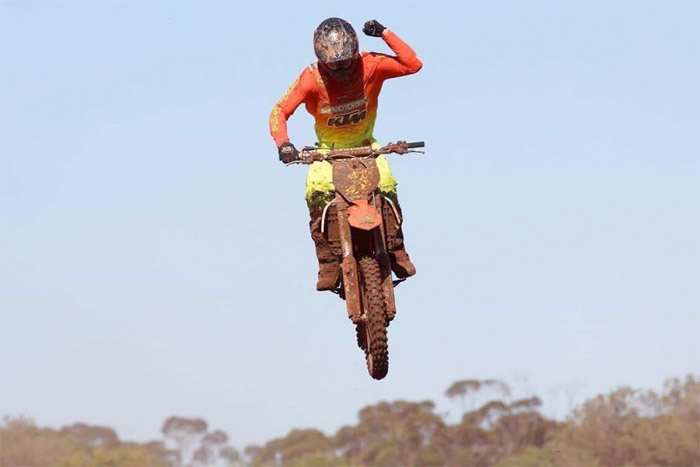 Semmens led not one, but two KTM Factory Team trifectas
The event, which attracted around 600 bikes and approximately 450 riders, again took on a distinct shade of orange as KTM Australia poured a mountain of effort and energy into the development of the nation's motocross future.

With backing from Kessner Motorcycles, the KTM Spare Parts Service provided general consumables all week long to keep the young tackers in the fight and hard on the gas.

KTM continued the clear dominance of Australian junior motocross that it has shown in recent years, both in terms of the number of KTMs behind start gates, and the number of KTM riders standing on podiums.

KTM Junior Motocross Racing Team rider Mason Semmens led the way for the Factory Team, taking his first ever Australian junior championship, and then rapidly backing it up with his second.

"It feels awesome. I was really happy winning one, but to come away with two is just awesome." Semmens said. "I put a lot of work into it, did heaps of training both on the bike and off, a lot of sand riding too, and it‰Ûªs paid off.

"It wasn't easy. I won the first three finals on my 250, but then I crashed in the fourth, went back to about third-last but rode back up to fourth. So I had about a two-point lead going into the last race so I knew I had to win. In the 125 me and my teammate Rhys were tied coming into the last race so I had to win that one too. It was hard work, but it worked out, so, happy as." 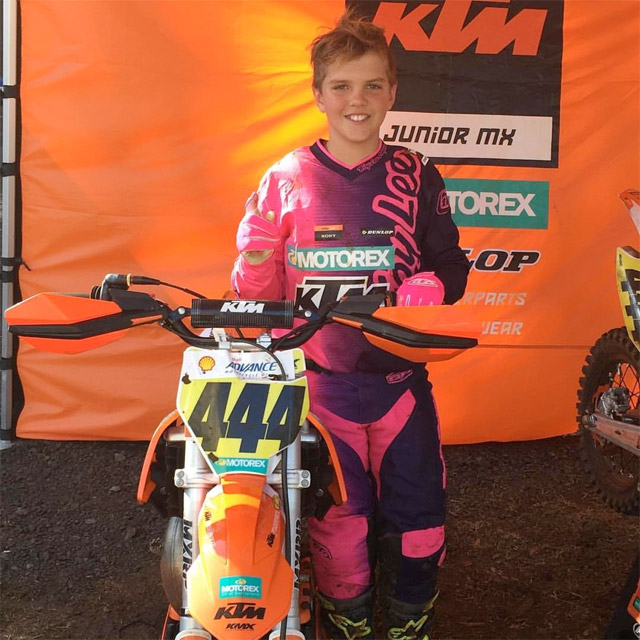 Noah Smerdon secured his third consecutive Australian championship.
Semmens led not one, but two KTM Factory Team trifectas, winning both the 13-U15 years 125cc and the 13-U15 years 250cc ranks ahead of teammate Rhys Budd and Regan Duffy.

"It‰Ûªs devastating. In one way it's a really good finish, but I worked really hard for that win, so it's devastating not to be able to get a title this year." Budd commented. "It was not a happy moment at the time. Other than that it was a good fun week and I'm still pretty happy to have two podiums.

"I almost holeshot every race, so some good starts really helped - I was always in the top three. Next year will be my last one in juniors, so the goal is definitely now to finish off with a win before we head up to seniors."

"It was pretty good fun, the track was really rough, and really bumpy." Smerdon said. "It feels pretty exciting to win three titles in a row. I trained a lot before the Aussies to make sure I won. My bike was running good - I got the holeshot nearly every race and the suspension was perfect." 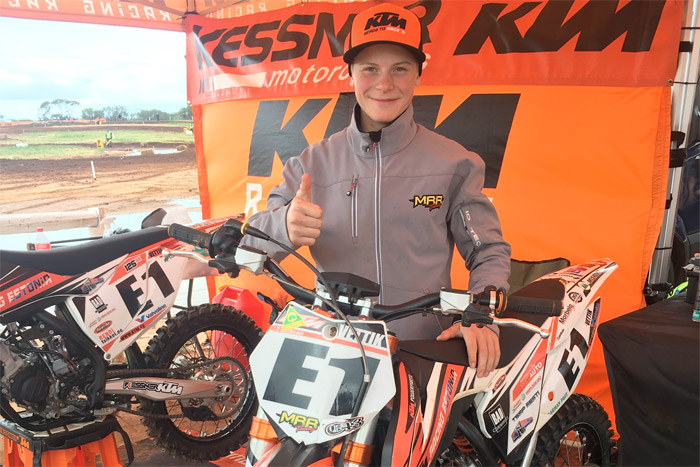 "The track this year was all about getting a start and getting out front in those first few laps. It was quite a basic track but it got rough and chopped out really fast, I had three fairly good results to come away with 2nd overall on the 125, unfortunately on the 250 I had a shocking second moto due to a crash. Apart from that I felt right at home on both my bikes all week!"

The dealer-backed Orange riders were also on fire, Talia O'Hare powering to a pair of championships for Mandurah City KTM - the U16 Female 85cc and U16 Female Lites categories.