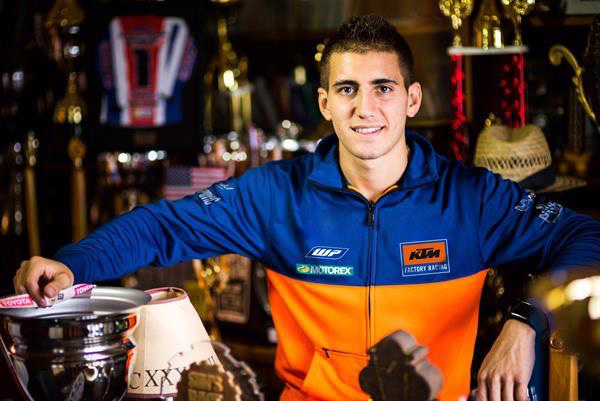 KTM Rally Factory Racing have confirmed that Luciano Benavides will join their the squad with immediate effect.

The young Argentinian will make his first competitive outing aboard KTM‰Ûªs 450 RALLY machine during the Desafio Ruta 40 this August, focusing on improving his rally racing skills under the watchful eye of the KTM Rally Factory Racing team.

Part of the KTM family for the past four years, 21-year-old Luciano has been successfully contesting various national and international off-road events. A two-time outright Argentinean Enduro Champion, the Salta native has represented Argentina at the prestigious International Six Days Enduro on more than one occasions and claimed victories in the Open A class of the Full Gas Sprint Enduro Series in the US.

An accomplished off-road rider, Luciano took the decision to make a switch towards rally racing at the end of 2016. Following in the footsteps of his elder brother and Dakar Rally rookie sensation Kevin Benavides, Luciano now has his sights set on learning and developing his skills as part of the KTM Rally Factory Racing team.

Starting with the upcoming Desafio Ruta 40 in August, Luciano will continue his apprenticeship aboard the KTM 450 RALLY machine at the OiLibya Rally in October with the goal of earning a place in the Dakar Rally 2018.

‰ÛÏI‰Ûªm really excited to be joining the KTM Rally Factory Racing team. For me, being part of the team that has been dominating the international rally scene for many years is like a dream come true.

"I‰Ûªve raced enduro for several years, winning two national titles in Argentina, and at the end of 2016 I decided to make the switch to rally. Finishing fourth overall at the 2016 Dakar Rally, my elder brother Kevin has been a role model for me.

"I am 21 now and I strongly believe this is the perfect moment to focus on building my career in rally racing. Becoming a member of such a professional team gives me great motivation to work hard. Our first event will be the Desafio Ruta 40 in Argentina and then we‰Ûªll head to Morocco for the OiLibya Rally, in October. My main goal is to get fully prepared for my first Dakar Rally in 2018. I‰Ûªm extremely grateful to KTM for giving me the opportunity to learn and improve.‰Û