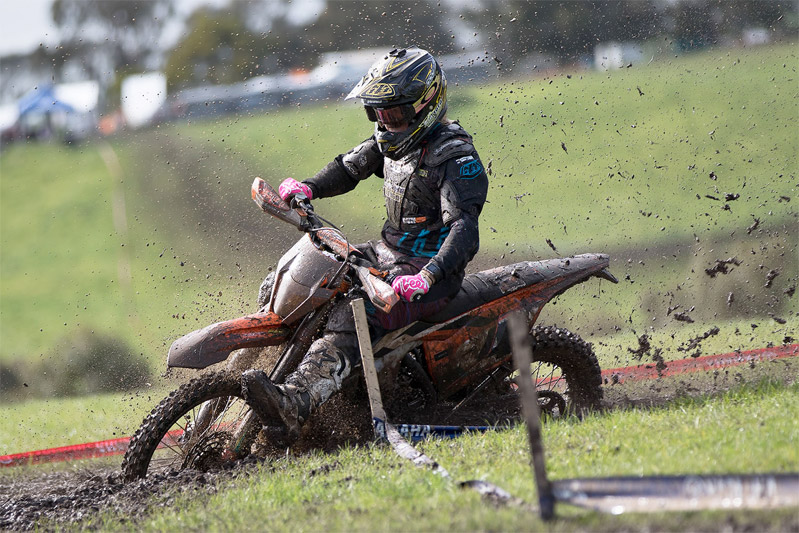 KTM has proven the superiority of its competition motorcycl team and bikes with complete dominance in the three Pro classes of the Australian Off Road Championship at the year‰Ûªs season finale at Penshurst, Victoria.

The KTM Enduro Racing Team's unstoppable ace Daniel ‰Û÷Chucky‰Ûª Sanders defied atrocious weather conditions to lead a KTM 1-2 of Australia's premier off-road racing title, as he won it for the first time in his career.

The excitable Victorian added two more round wins to his season tally, taking it to 10 as he convincingly wrapped up Saturday's round ahead of Husqvarna's Lyndon Snodgrass and KTM's Jack Simpson, with the outright podium an identical one on Sunday.

So complete has been Sanders‰Ûª synergy with the KTM 300 EXC that he has only dropped two round wins all season long, after he struck an unseen object and injured his leg at the South Australian stop on the tour at Murray Bridge.

The fact that his teammate Tye Simmonds won one of those two races on his KTM 450 EXC gave an KTM 11 from 12 stranglehold of AORC outright wins for the year.

‰ÛÏI didn't dominate this quite the way I had planned to; we were just chasing set up a bit early on." Sanders said. "With this ‰Û÷17 we hadn't had a sloppy race with it yet so we were finding things out about set up as we went and trying different things just to see what it would do.

"It was very slick and I didn‰Ûªt have as much confidence in myself as I probably should have. I had a couple of early crashes so I tried to just keep it up right and push as hard as I could at the end. My mate Lyndon Snodgrass was going good so I was battling with him - it was just like training at home!Everything was sorted today though and I went back to putting 16 seconds on the boys every test so, the confidence was good.

"This year‰Ûªs been great, it would have been good to get the clean sweep, but that injury screwed me up. We sort of proved that we are the fastest everywhere though, so now it's time to move on to bigger and better things.

"We've got the 6-days coming up so it will be cool to go over there and chase it up with the big boys and see how we go. I've worked real hard to chase my dreams, so I'm not stopping now. When I say I want to do something I'll put everything into it and be prepared to sacrifice a lot of things to get where I want to be.‰Û 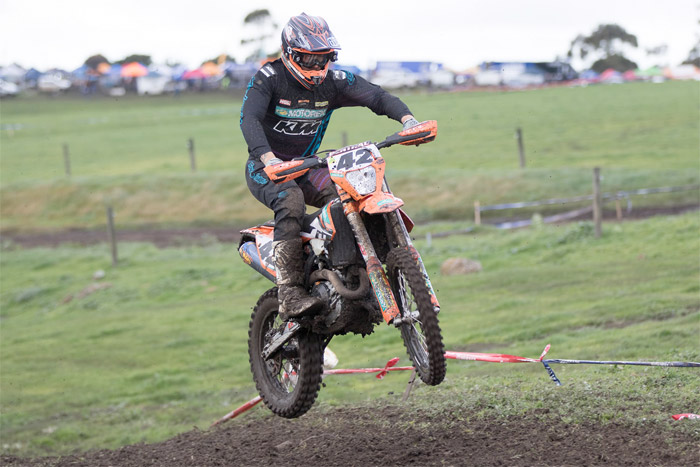 Simmonds himself was on the march towards a brilliant runner-up place in the championship, in what was only the Bourke, NSW, rider's second year of AORC racing.He also wrapped the E2 class, with a class third and a win at Penshurst.

‰ÛÏNot too bad here, we were poking along okay. We were lucky enough to have a few points up the sleeve to make it easier to wrap up the second outright. I didn't ride the best but we got the championship wrapped up so for me it's happy days!" Simmonds reflected.

"Yesterday I had nothing for the boys early on, I straight up got smoked. But we got it together a little bit and were able to protect that lead from Hollis. Today was a bit better. I won the class for E2, and was a little bit closer to the boys up front.

"I'm happy with this season. I started slow and was terrible, but we salvaged points and we got through it, that was the main thing. Obviously the last few rounds were more my style of tracks, but we worked hard on this so it's good to see the rewards. It's awesome to see KTM go 1-2 as well, Chucky has worked his arse off too, so he definitely deserves it.

"I just want to thank the whole KTM team for their effort and help, and my personal sponsors and all the fans who follow what we do.‰Û 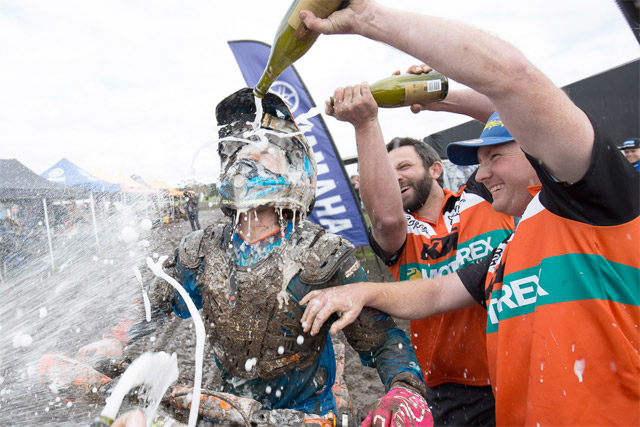 Ben Grabham ‰ÛÒ KTM Enduro Racing Team Manager could not have been more happy with how the season went.

‰ÛÏObviously we came in with a good lead, with the boys running one and two outright and first in both their classes, so we knew what we needed to do, but Chucky went out there when he didn't have two and won outright in some pretty muddy, tricky conditions. He wrapped up E3 and the championship all in one go and proved without any doubt why he‰Ûªs the champion.

"Tye rode quite sensibly to be honest, and he locked away second outright behind Chucky, so the 1-2 was very nice to get. Today, Chucky didn't even have to line up. He had everything wrapped up and we had a little bit of fun last night, so he was a little bit the worse for wear this morning but he went out there and dominated again.

"He was a level above everyone this year; he‰Ûªs been amazing to work with, and it's been great to watch and grow for the last two years. It was also cool seeing him put the mighty 300 two-stroke on the top step - it's been a little while since the two strokes have won the AORC. Tye only had to get two points today, but he went out dominated E2, and took the championship. So he's definitely shown his growth in the last two years in adapting to off-road. Everyone's worked very hard, obviously Mick Carusi our head mechanic, and all the boys.

"Our bikes have been faultless all year, those EXC's are an amazing machine, that's for sure.

"It's also great to see KTM get a clean sweep of all the Pro-classes with Jack Simpson winning on the 250F. We haven't done much but we've helped him where we could. So it's pretty amazing that after 12 rounds we‰Ûªve cleaned up everything like that.‰Û 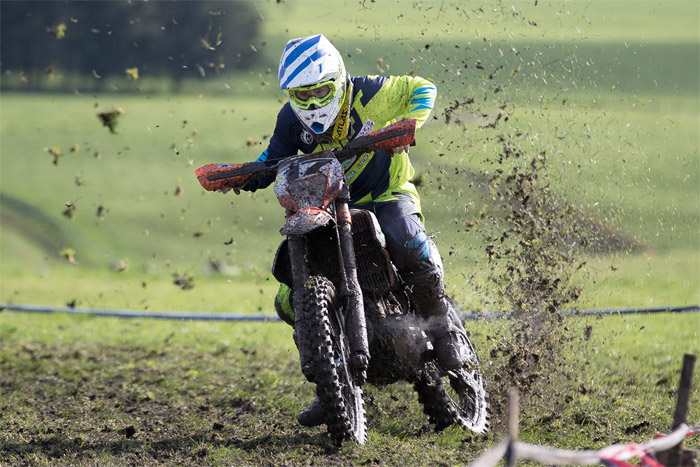 The occasion of the finale was made even more joyous for the Orange men thanks to the achievements of another Victorian, E1 class rookie and former motocross pro Jack Simpson. Simpson put the E1 category beyond doubt with a stunning pair of rides for the weekend, using his KTM 250 SX-F to win the class and take his first AORC outright podium on Saturday, then doing it all again on Sunday.

‰ÛÏI've been going after that number one plate all year, and now finally the weight‰Ûªs off the shoulders and I can relax." Simpson said. "That will never ever get taken off me; it's in the history books.

"I came into this round with a little of a buffer in the E1 class, and I had no expectation for the outright position. I was just aiming to win E1. But I finished first in my class and third outright the first day, and had a bit of good luck as well, because Riley Graham and Scott Keegan both lost their chains and DNFed or were way out of the picture.

"Glenn Kearney had a couple of big crashes and was down in 14th or 15th, so all I had to do was just stick to what I was doing, and come in on Saturday with the number one in the E1 class, and third outright which was my first ever outright podium.

"Today was basically a carbon copy. Still had no idea about the outright situation, but by winning the class and finishing on the podium outright I made up 35 points on Stanford and Ralston and was two points short of finishing fourth - so that was a good thing.

"My plan this year was to come in, learn the ropes of the sport and have no expectations. Just target the rounds and the championship will take care of itself.‰Û