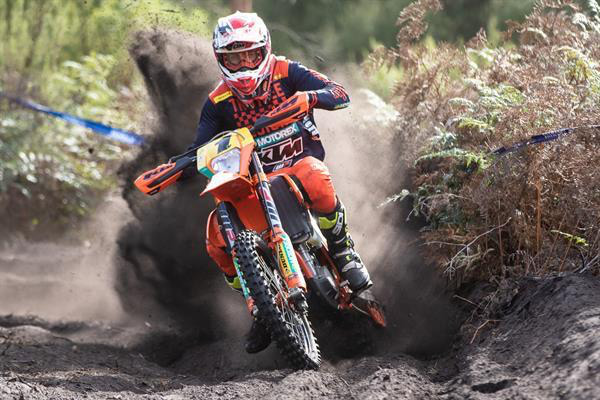 It was another masterclass of Milner in technical, dry conditions -
KTM Enduro Racing Team's Daniel Milner won rounds three and four of the 2018 Australian Off-Road Championship (AORC) at Hedley in Victoria this weekend, maintaining his perfect record in the E3 ranks for the season.

Milner was once again unmatched in class, winning Saturday by over three minutes and Sunday in excess of two minutes ahead of the chasing pack. The defending series champion also topped day two outright aboard his KTM 500 EXC-F.

It was another masterclass of Milner in technical, dry conditions and he now has a 21-point lead in the championship with a perfect score of 100 points following four of 11 rounds.

Original plans to stage a Cross Country round were shelved due to the lack of rain in the region, revised to feature a unique Super Sprint format on Saturday and a more traditional Sprint round on Sunday.

"It was really good to win my class on both days and the outright was close as well. "It was a bit disappointing to lose by three-tenths on Saturday after a big off early on, in which I lost a lot of time, but it was pretty crazy for it to be that close in the end.

"I was hungry for today and put together the cleanest run that I could, so I was satisfied with the way it worked out. That was the hardest Sprint round that I've done at Hedley and it was super-rough, so that made for hard racing - you really had to choose your lines to find the better places to go.

Those results have Snodgrass second in the championship tally four rounds into the season, with the next stop of the series due to take place at Dungog, New South Wales, on 28-29 July.

"It was a pretty gnarly weekend in Hedley and the track was brutal, plus the conditions were really dusty as well." Snodgrass commented. "I was pretty happy to take second in class and third outright on Saturday, because the KTM 450 EXC-F was unreal in the dusty, sandy conditions and that was a good result for the KTM Enduro Racing Team.

"We scored second again in the E2 class on Sunday, which was positive and now we have a number of events on between now and the next round of the AORC and we will keep on working to close the gap to the front."