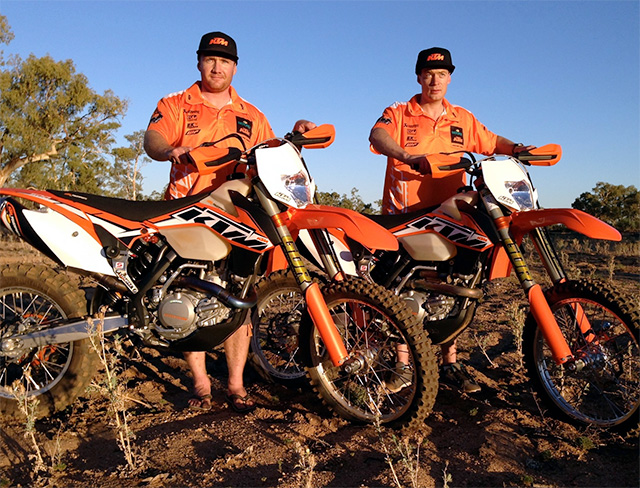 The three-man KTM Desert Racing Team will support the growing Aussie desert racing calendar, and feature two of the country‰Ûªs most decorated off-roaders and one exciting up-and-comer.

The new face belongs to 24-year-old machinery technician Ivan Long, from Tanunda in the Barossa Valley. Long is the winner of the last five SA Off-Road Championships, and finished fifth outright in this year‰Ûªs Finke.

Moroccan Rally stage winner Grabham will also be joined by Toby Price, who will span two teams - the new desert racing unit and the Motorex KTM Off-Road team - in what, for the Maitland, NSW rider will be a very, very busy year.

Between them, Price and Grabham have no less than six Finke desert race crowns, as well as enough A4DE and AORC titles to stuff a gearbag.

Grabham this year added a first-time Dakar Rally finish and victory in the inaugural WA Desert Racing Tri-Series to his glittering resume, while Price spent the year travelling the long and difficult road back from a serious spinal injury suffered in April. Both are regarding the upcoming season with appetites whetted.

The team‰Ûªs calendar includes the marquee Finke and Hattah epics, the WA Tri-series, the Gascoyne Dash, and selected major desert races as they arise.

Team Coordinator Grabham explained the team‰Ûªs origin, ‰ÛÏOur scope has evolved over the last two years with a calendar of desert races popping up and it makes sense for us to have our own team for the season.

‰ÛÏLongy we haven‰Ûªt heard so much about yet, but this year he really came on strong as a privateer. He‰Ûªs a happy young feller and Finke result showed he‰Ûªs got a heap of potential. For the team to help him with bits and pieces and give him access to all the great settings we use, we might see him on that outright podium next year.

‰ÛÏToby is in his second year of a 2-year deal with KTM he wants to race everything. He‰Ûªs capable of winning everything too, so it makes sense for all of us to let him try. He‰Ûªll have a very hectic schedule, but if he stays healthy it‰Ûªll work out better all round having him in both teams.‰Û