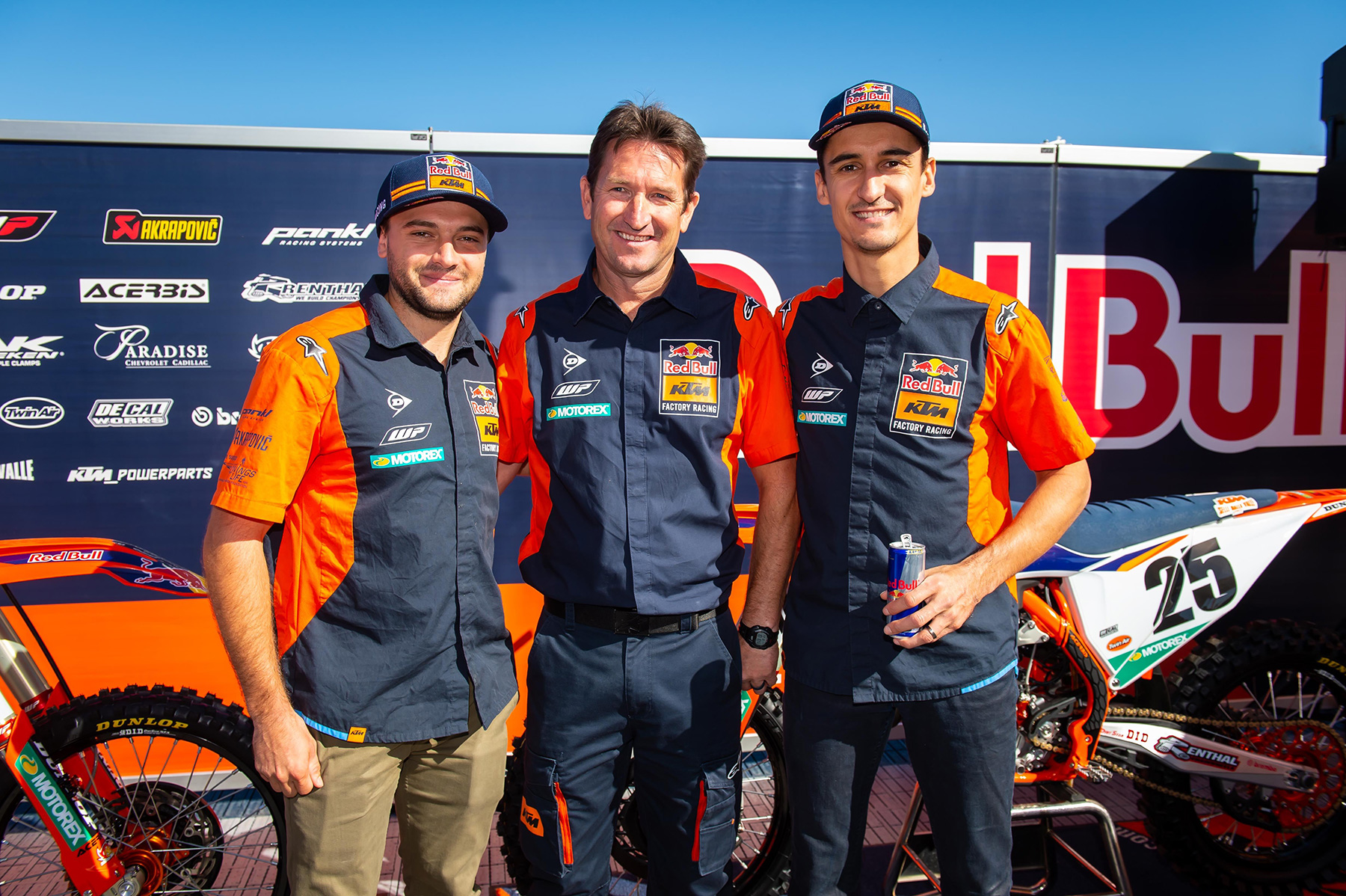 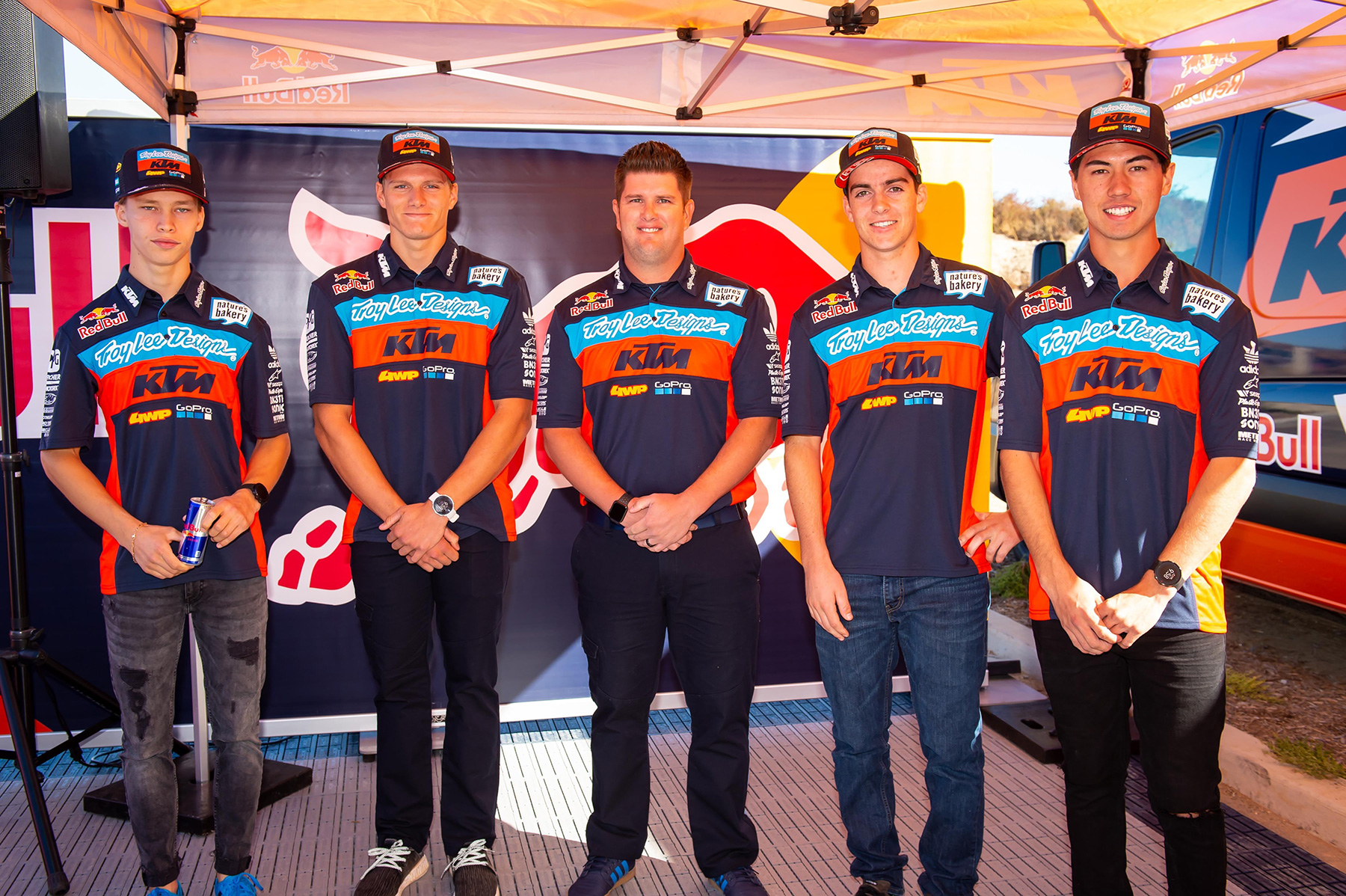 The Troy Lee Designs/Red Bull/KTM team. Photo: Simon Cudby
Troy Lee Designs/Red Bull/KTM will once again serve as the official KTM 250 factory team with a four-rider roster in 2020. The young team has undergone big changes this season with a brand-new lineup of riders, all competing aboard the KTM 250 SX-F. Recent Red Bull Straight Rhythm runner-up, Brandon Hartranft, officially joins the team wearing the #30 in his second full year in the 250SX class. Hartranft finished sixth overall in the 2019 250SX East Championship and the 21-year-old looks to expand on his success this year.

Seventeen-year-old French rider, Brian Moreau, will make his full-time U.S. debut with the TLD squad riding aboard the #104 machine. Moreau, the 2017 European 125 Class Champion, placed fifth in the Amateur All-Star Class at the 2018 Monster Energy Cup, proving his potential in the highly competitive field.

Making his professional debut last season in the Pro Motocross Championship, longtime KTM Orange Brigade amateur rider Derek Drake will continue his seventh season with the KTM brand as he joins the team full-time for 2020. Drake, now 20-years-old, will be joined by longtime amateur teammate Pierce Brown, who has also been with the KTM brand since 2014. The seventeen-year-old Brown made an appearance at the Florida National last season before making his full-time pro debut in the 250SX class aboard the #163 in 2020.

Team Manager Tyler Keefe will continue to oversee the team‰Ûªs operations, while working closely with KTM to achieve the ultimate success in 250cc competition.

The Rocky Mountain ATV/MC ‰ÛÒ WPS ‰ÛÒ KTM team, which will field two riders in the 450cc division for both AMA Supercross and Pro Motocross, continues its association with KTM for 2020. With Team Manager Michael Byrne back for a third season and Team Owner, Forrest Butler, injecting his many years of professional experience, team riders Blake Baggett and Justin Bogle look to put all the pieces together for a successful season aboard the KTM 450 SX-F Factory Edition. In 2019, Baggett claimed his first and the team‰Ûªs first-career 450SX and 450MX wins and he is primed and ready to attack additional wins as he goes after a championship title. Bogle, who joined the team last season as a fill-in rider, is now set to compete in the full AMA Supercross and Pro Motocross Championships in 2020 aboard the KTM 450 SX-F Factory Edition.

Up next is the Monster Energy Cup in Las Vegas, Nevada on Saturday, October 19. 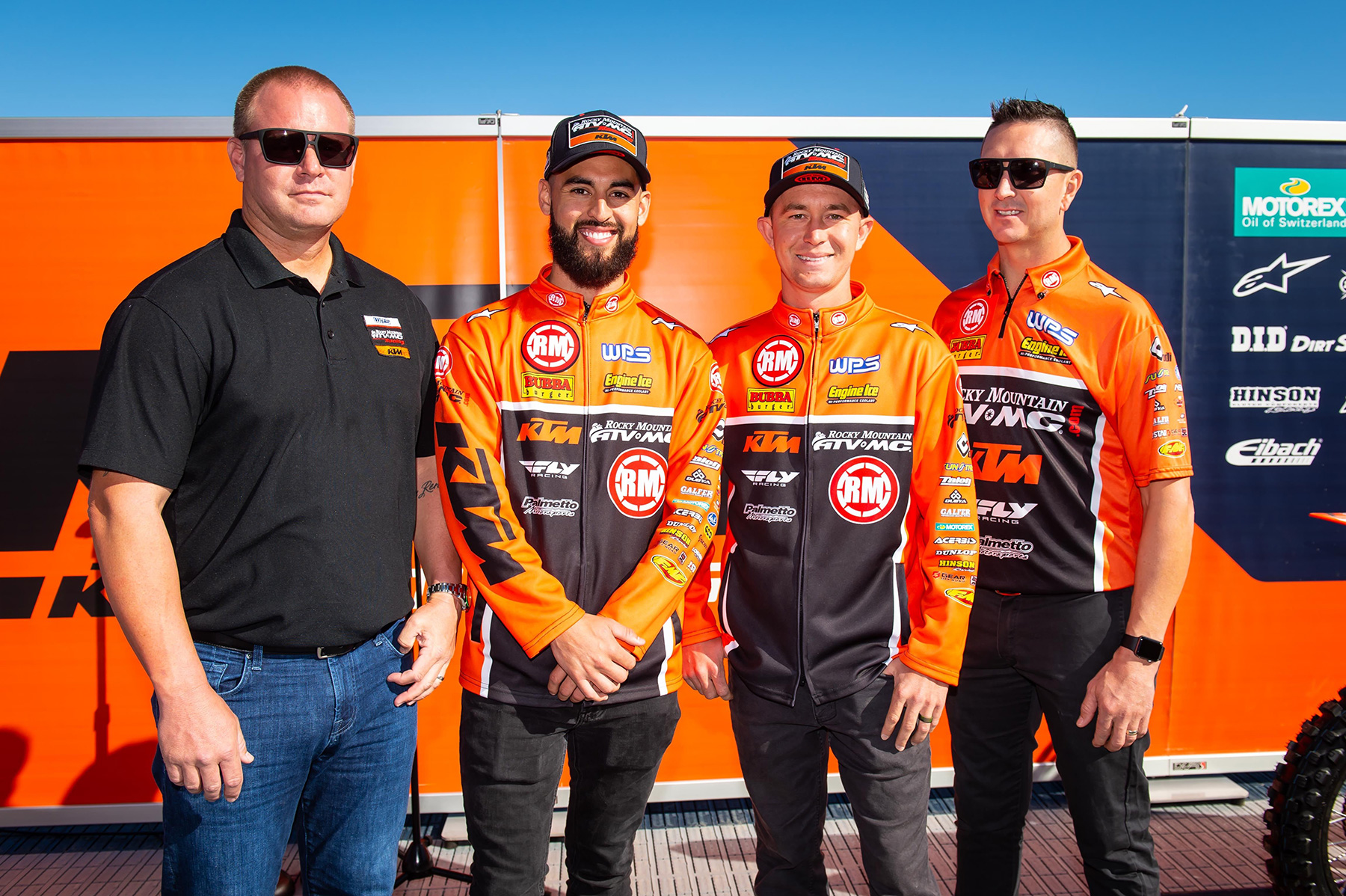