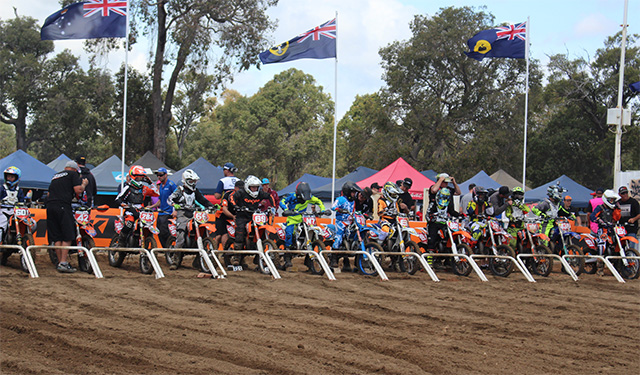 Motorcycling Australia (MA) has announced that the Interstate Challenge for the KTM Australian Junior Motocross Championship (AJMXC) is ready to rumble again!

The Interstate Challenge will pit Australia‰Ûªs best up and coming Junior talent against each other, when the KTM AJMXC returns to the Horsham Motorcycle Club (September 30 - October 6). Several of Australia‰Ûªs State Controlling Bodies (SCB) have selected their teams and had their say on the battle ahead.

The SCB‰Ûªs will be heading to the Horsham track in Victoria to contest the AJMXC. These championships cover competition classes from 50cc Auto up to Junior Lites. The Interstate Challenge has made for a traditional healthy rivalry amongst the states.

Motorcycling Australia's CEO Peter Doyle shared; "We are very excited to reinvigorate the Interstate Challenge, pitting State's against each other at the 2017 KTM AJMXC! The Interstate Challenge will be one of the most exciting aspects of the event and we can't wait to see which state comes out on top."

Motorcycling Queensland‰Ûªs Kim Rowcliffe shared; "The Queensland Junior Motocross Squad of 12 is ready for the AJMX! All of our Queensland Squad will be introduced in the lead up to the Championships so you can get to know and follow our team members. Practice starts on the Sunday, with racing commencing on the Monday. All of our Queensland squad riders will be competing for individual honours along with competing to return the ‰Û÷Interstate Challenge trophy‰Ûª back to Queensland. Our Team has successfully challenged and won this perpetual trophy over the years."

CEO of Motorcycling Western Australia, Rick Gill shared; ‰ÛÏAs everyone knows, WA stands for Way Ahead, so unfortunately for you 'East Coasters', you had better prepare for second place in the Interstate Challenge!‰Û