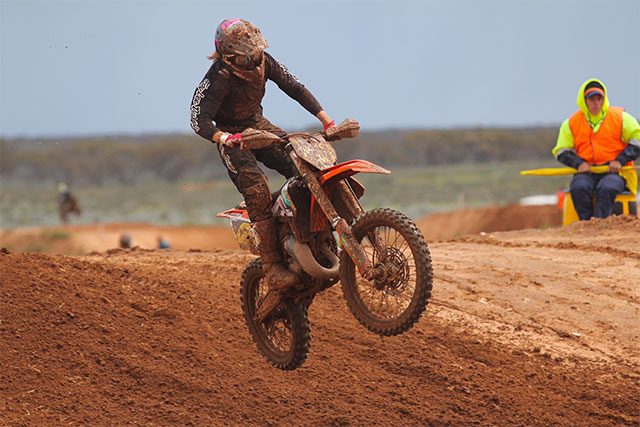 With racing postponed yesterday due to the severe weather that swept through South Australia throughout the last two days, bikes returned to the track at Riverland Junior Motorcycle Club at Renmark for more KTM Australian Junior Motocross Championships finals action today.

With club volunteers putting hours and hours of time and effort into pumping water off the track and getting the surface prepared for racing today, when riders headed out to resume their KTM AJMX campaigns, competitors were treated to conditions that were some of the best of the week.

The first final for the 100cc-125cc 13-U15 Years was the first race out on the soft loamy track this morning, and from the minute the gate dropped, KTM‰Ûªs Rhys Budd looked more dominant than ever out in front.

With the class packed with talent, Regan Duffy, Mason Semmens, and Paris Rode showed their skill and talent throughout the ten-minute moto, and by the five-minute mark, second placed Duffy had put down the fastest lap time of the race.

But after a ripping start, it was Budd who secured the first 100cc-125cc 13-U15 Years class final at Renmark, while despite a late charge, Duffy was forced to settle for second. Semmens took third place, followed by Rode who put in his best ride exactly when it counted to finish in fourth.

The premier class of this year‰Ûªs KTM AJMX impressed the crowds when they headed out for their first final this morning, and the first lap for the class proved to be nothing short of eventful.

With one lap in the books on the treacherous circuit, the top four riders Cody Dyce (Yamaha), Caleb Grothues (KTM), Morgan Fogarty (KTM) and Mitchell Outram (KTM) all muscled their way to their front, and commenced an all out battle for the first finals race victory.

But it was the pass Grothues made on Dyce mid-way through the race that had the crowd cheering. Both riders were neck and neck as they headed back on to the start straight for lap four, ensuring their first 125cc final went down to the wire.

And once Grothues had made his way to the front, no one was able to catch the Western Australian rider, and as a result the KTM mounted star secured the first 125cc finals victory. Following Grothues was Dyce who crossed the line in second ahead of Fogarty in third. Outram, Michael Driscoll and Jake Williams, all finished inside the top ten.

Unfortunately for the 85cc/150cc 9-U12 Years competitors, their first final was initially red flagged due to a crash on track. When the race was restarted it was young Blake Fox who got to the race lead ahead of Kawasaki mounted Brad West, and within only a lap, the pair were at it for the lead position.

Just back from the top two, KTM‰Ûªs Noah Smerdon managed to keep Deegan Mancinelli at bay in fourth, while Liam Atkinson completed the top five.

With this morning‰Ûªs wet conditions adding another factor to the race, riders in the first final for the 85cc 9-U12 years class became close to unrecognisable throughout the ten-minute race.

But one rider who couldn‰Ûªt be mistaken was the number 25 machine of Fox, who crossed the line with a finals race victory ahead of Smerdon who made a late pass on West to collect second. West settled for third position in his first final, while Liam Atkinson finished in fourth.

Before riders had even left the grid for the 85cc/150cc 12-U14 Years final, there was plenty of drama, with both local boy Alex Larwood and Regan Duffy forced to withdraw due to bike issues.

With two top riders out of the equation, when the race got started it was KTM‰Ûªs Tyran Tomich who capitalised on the opportunity, moving straight in to the race lead ahead of Tye Jones and Meiko Vettik.

With Tomich out in front with a healthy lead, the attention on track shifted to second position where Jones was using all his power to fight off his Estonian opponent, however as bikes headed in to lap three, Vettik made the move up to second relegating Jones to third.

From there, the last lap became the most exciting of the race. After moving in to second, Vettik was determined to get to the front, and after closing in on Tomich‰Ûªs rear wheel, he began to setup a pass. And thankfully for the Estonian, he made the pass stick - crossing the finish line to collect the chequered flag a bikes length ahead of Tomich in second. Jones wrapped up the first final in third, followed by Brodie Connolly in fourth.

The ladies headed out for their fourth final of this week‰Ûªs KTM AJMX this afternoon, and once again Tahlia O‰ÛªHare showed that regardless of the conditions, that she was up to the task.

By lap two, O‰ÛªHare had increased her lead to seven seconds, however Tanesha Harnett back in second position was given no reprieve, with Tahlia Drew edging closer and closer every corner. And unfortunately for Harnett, when bikes came around for a third time, she had been relegated to third, with Drew slotting up to second position.

But the woman of the moment was Western Australia‰Ûªs O‰ÛªHare who collected the chequered flag with another final race victory to her name. Drew survived the muddy track conditions to finish in second ahead of Harnett in third. Ebony Harris and Emilee McPherson completed the top five finishing positions.

When the 250cc 15 years‰Ûª class hit the track for their first final, spectators rushed trackside to watch the big kids do battle. In the first final though, it was Husqvarna Australia‰Ûªs Callum Norton who got the jump off the start and moved in to the race lead, while Taj Marshall and Caleb Grothues slotted in behind him.

Within only three laps of the race, Norton was in to lapped traffic, proving that his speed was close to unmatchable regardless of the conditions. Just back from Norton, Marshall continued to look strong in second position, while Grothues fought to make up time in third.

When riders received the last lap board, Norton was well and truly in the box seat to collect the first 128-150cc/200-150cc 15 Years final victory, and only a lap later that‰Ûªs exactly what he did.

Despite a last lap charge from Marshall, the Honda rider finished up in second, followed by KTM‰Ûªs Grothues who crossed the finish line in third. Morgan Fogarty and Brodie Ellis wrapped up their first final in fourth and fifth places respectively.