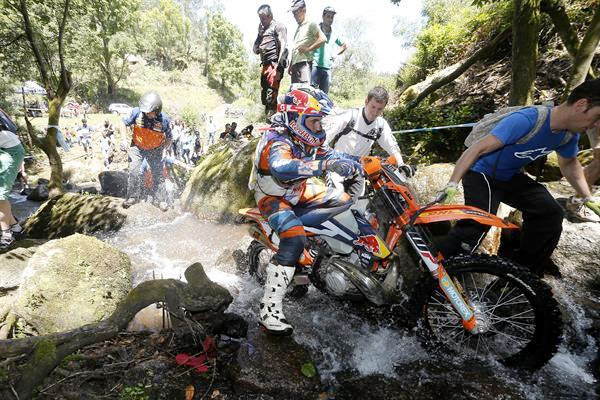 Made up of three days tough riding by daylight and at night, the 2016 edition was not without its difficulties, even for riders who had experience of the race in and around the city of Porto.

Alfredo Gomez successfully launched his bid with a solid win in the spectacular City Scramble Prologue in Porto on Friday night but Roman took him to task in Saturday‰Ûªs Time Trial and pushed him back to second overall.

The various components of the competition scored cumulative points and Gomez was hoping to return the favor in the Night Race on Saturday. But this part of the competition proved to be more dramatic than organizers intended when some outside interference to the track markings resulted in many of the competitors getting lost.

Gomez‰Ûªs hopes of a comeback were raised when organizers scrapped the Night Race results for the Pro and Expert riders and he went into the third and final day hoping to claw back the time advantage from Roman. He knew if he was able to take the victory in the feature race the overall win was still his.

Roman was equally determined and he was fastest through the first series of slippery rider beds before Gomez grabbed the initiative and took control half way through the first lap on his new KTM 300 EXC. He then had to fight hard to maintain the advantage and while Gomez finally took the prize, Roman was a fierce opponent throughout the race.

‰ÛÏIt‰Ûªs fantastic to win here at Extreme XL Lagares and claim a hat trick of victories ‰ÛÒ it‰Ûªs an incredible feeling." Gomez said. "I really enjoy this race. It‰Ûªs quite a special one for me as it‰Ûªs where I won my first major Hard Enduro.

"I wanted to start strongly and pushed hard to set a fast pace in the Friday prologue. I won the Time Trial and then both the Pro and SuperFinal, which was great. I rode well during the Saturday Time Trial and despite a few mistakes finished as runner-up, losing only 12 seconds to Mario (Roman).

"The Night Race was bad, I got lost along with many other riders due to some problems with the marking, which was out of the organizers control. They decided to cancel that part of that race, which meant I still had a chance of victory. I knew Mario would be strong from the start of the main race so I settled in behind him.

"Midway around lap one I got in front and then upped my pace to build a gap. My riding was good and I felt comfortable. I controlled the pace and led for the rest of the race to claim the win. A big thanks to KTM and my mechanic for their support.‰Û