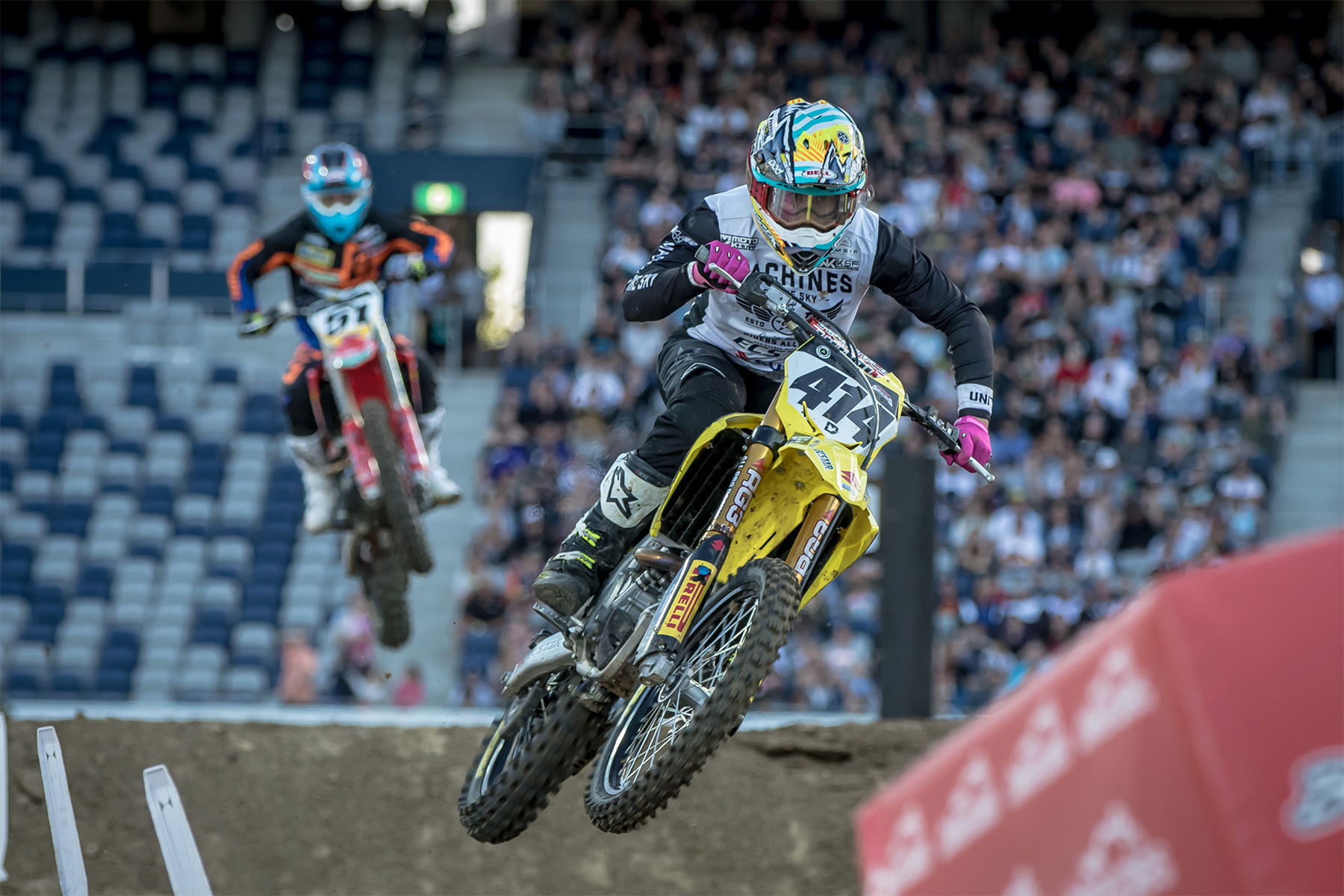 Jesse Dobson rounded the night out in 10th place. Photo: Arryn Minerds
The KSF ECSTAR Suzuki Racing team have had another strong performance under the lights of the GMHBA Stadium at the third round of the 2018 Australian Supercross Championship on Saturday night.

In front of a large crowd, on a man-made track built on the hallowed turf of the Geelong Cats football club, Jesse Dobson fired his Suzuki RM-Z450 into 7th position at the end of qualifying as the top ten qualifiers rounded out the session separated by just over one second between them.

With Jesse Madden continuing to be plagued with a back injury that he has carried through the majority of 2018, he has decided to sit out the remaining rounds of this year's championship, with Gradie Featherstone making a move up to the SX1 class for Geelong after racing in the SX2 class at the opening two rounds.

Hitting the race track for the first time in the 450 class, the British rider was solid on his way to a 13th position during qualifying.

Lining up in opposite heat races, Featherstone was the first of the Suzuki duo to qualify for the nights three race main format, crossing the line in 7th position in heat one. 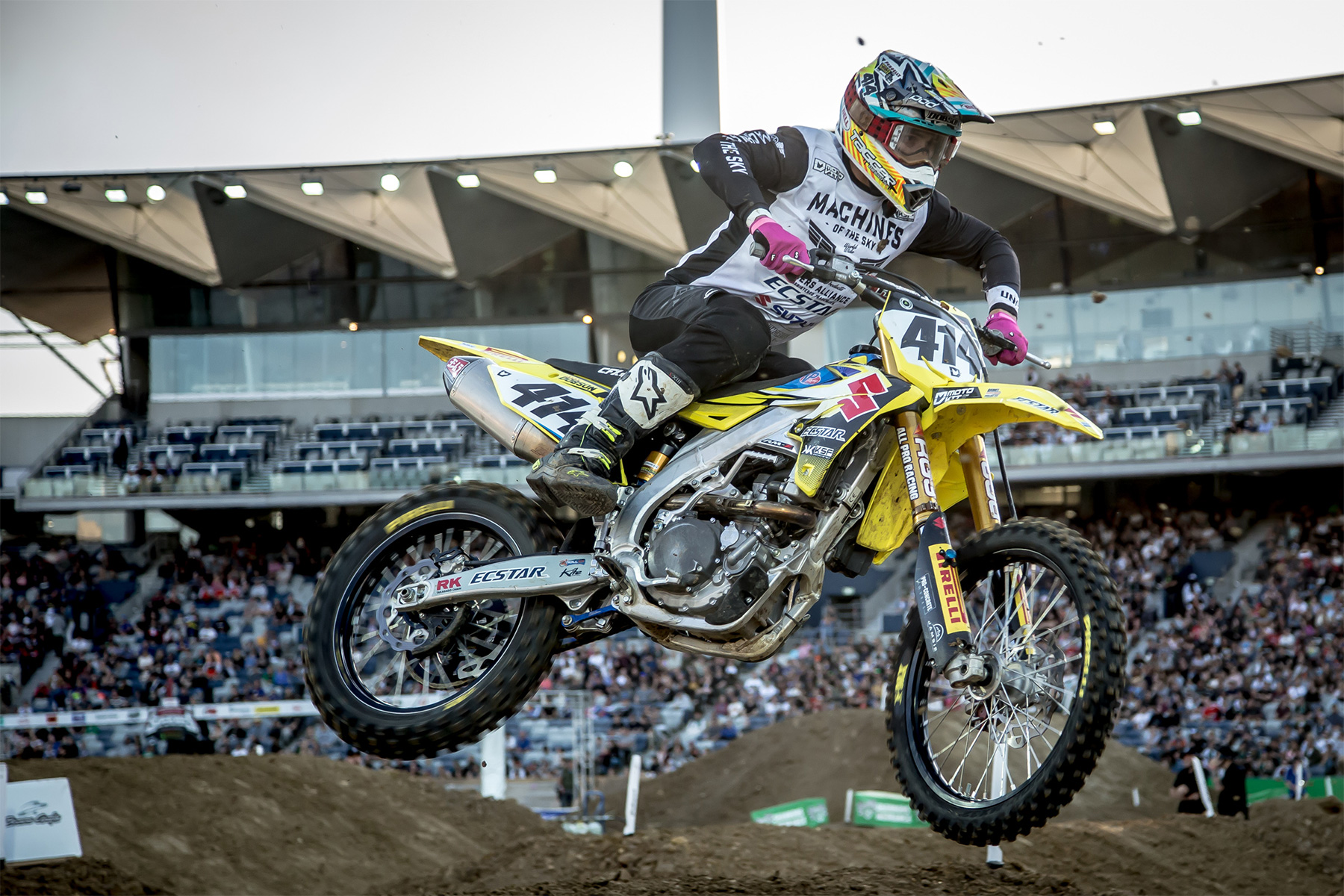 Jesse Dobson rounded the night out in 10th place. Photo: Arryn Minerds
Dobson fired his RM-Z off the line to grab the holeshot at the start of heat two, before being relegated to the rear of the field after a slip up in the whoops. However he was able to recover and work his way through the field to finish in 6th position.

In the opening 12 lap final of the night, the two Suzuki men ran line astern in the opening stages of the race, holding down 7th and 8th positions, with Dobson putting in consistent laps in heavy traffic to cross the line in 7th.

Meanwhile a small mistake from Featherstone left him to finish the race out in 11th.

It was a tail of differing stories for the two riders in final number two, with Dobson getting off to a mid pack start before battling his way to a seventh-place finish. Unfortunately for the Sunshine coast resident he was relegated three spots at race end. 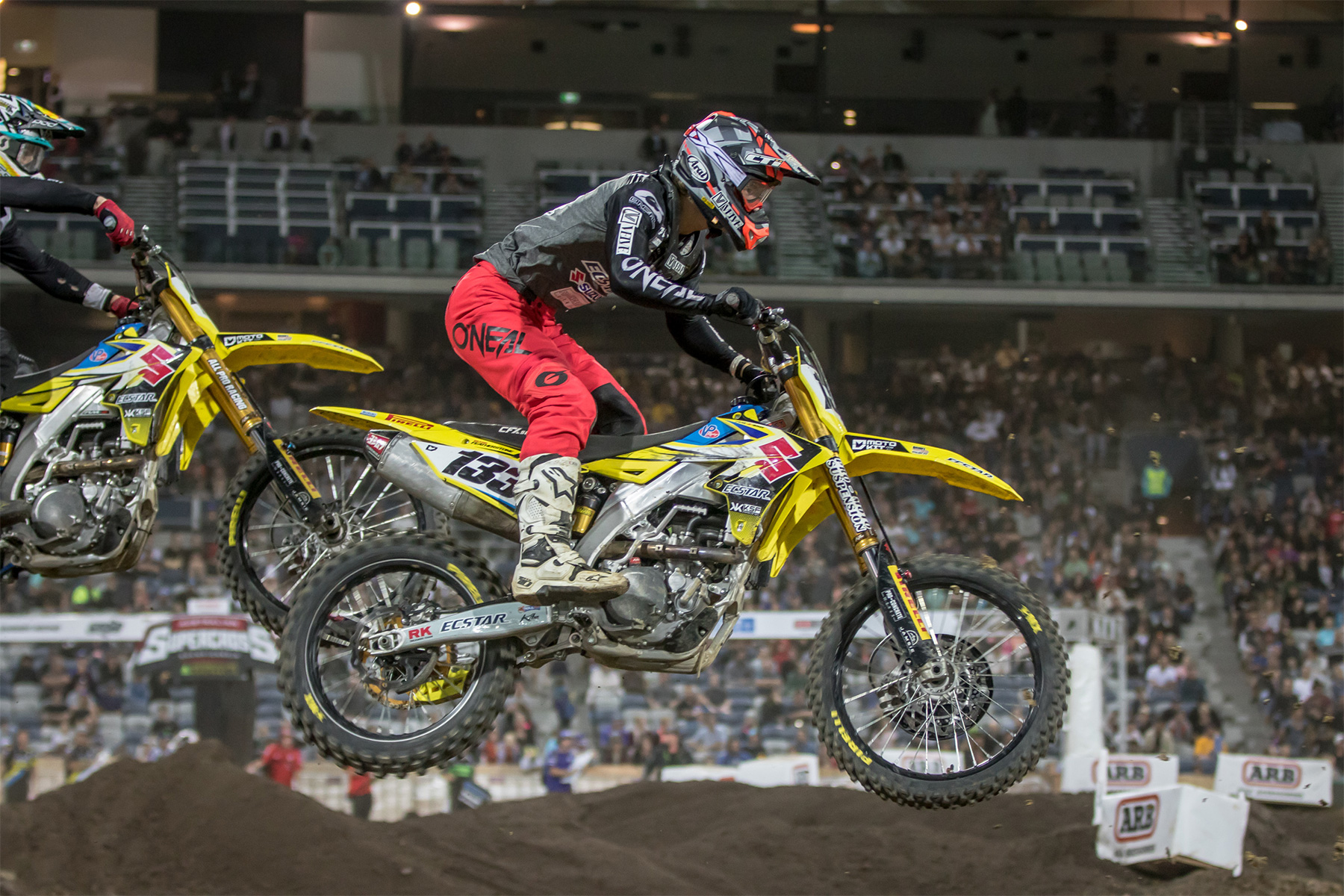 Current European supercross champion Gradie Featherstone moved up from the SX2 class to the SX1 class. Photo: Aaryn Minerds
For Featherstone, he was left chasing the field after getting caught up in the first turn melee. Putting his head down, the current European supercross champion put in his best ride for the night picking off riders one by one to finish the race in 9th position.

Both riders once again had their work cut out for them in the final race of the night as they charged their way forward, with Dobson for the second straight race being accredited with 10th position, with Featherstone one spot behind in 11th.

At the end of the three finals, Dobson had done enough to secure his third straight top ten results of the series but was left wanting more after showing some great speed all day long.

"I was happy with the way I rode tonight and the intensity I showed, unfortunately, the results don't show that on paper." Dobson reflected.

"I was able to grab a holeshot in my heat race, which was a great feeling, and felt I was racing well in all three finals; it just was not quite my night.

"The boys up front are certainly on it at the moment, and it was good to be able to run with them at stages during the evening, every time we are out on track battling them, we are learning, there is plenty to take away from tonight."

"The event itself was great, I like the three-race format, and with the races being so close together, fitness still comes into play. The racing was exciting for us out on track and by the sounds of the cheering coming from the crowd I am sure it was exciting to watch.‰Û 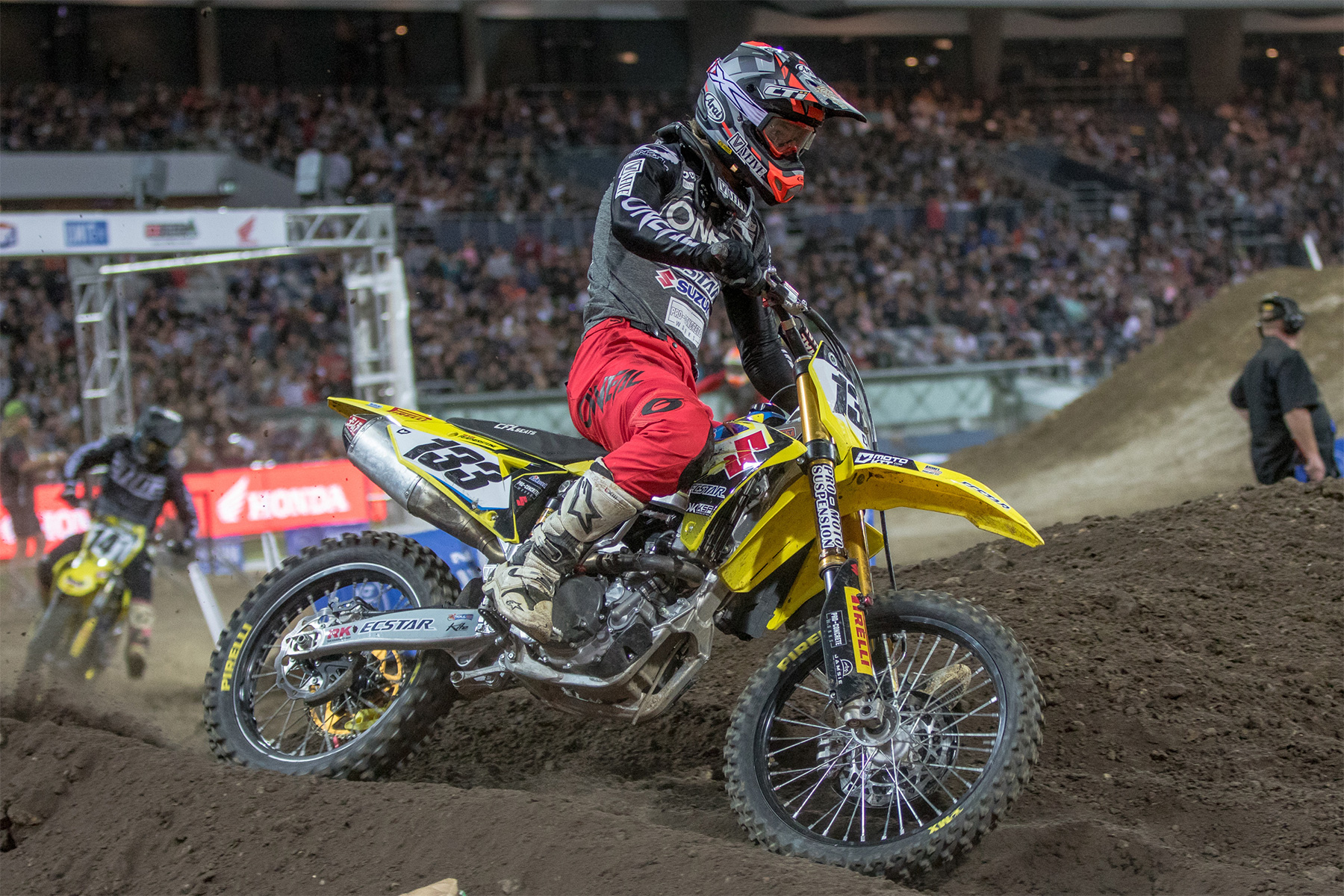 Current European supercross champion Gradie Featherstone moved up from the SX2 class to the SX1 class. Photo: Aaryn Minerds
For Featherstone, the night was an excellent opportunity to see how he faired against Australia's best racers in the SX1 class and was happy to come away from the night in 11th position overall.

"Overall I am happy with how the night went, there is a lot of fast riders in the SX1 class, and it was good to battle inside the top half of the field for the majority of the night.

"I didn't make things easy on myself, getting caught up in first turn crashes, but we were able to race through the field all night long and gained some great experience.

"I really liked the night program; I feel it suited myself much better. Racing in a big football stadium under lights was a lot of fun, especially with such a big crowd on hand.

"I have to thank the KSF team and Suzuki Australia for the opportunity to race the SX1 class tonight and for the remainder of the series."

The KSF ECSTAR Suzuki Racing team will next be in action when the fourth round of the 2018 Australian Supercross Championship heads to Gillman in South Australia, this Saturday the 20th of October. 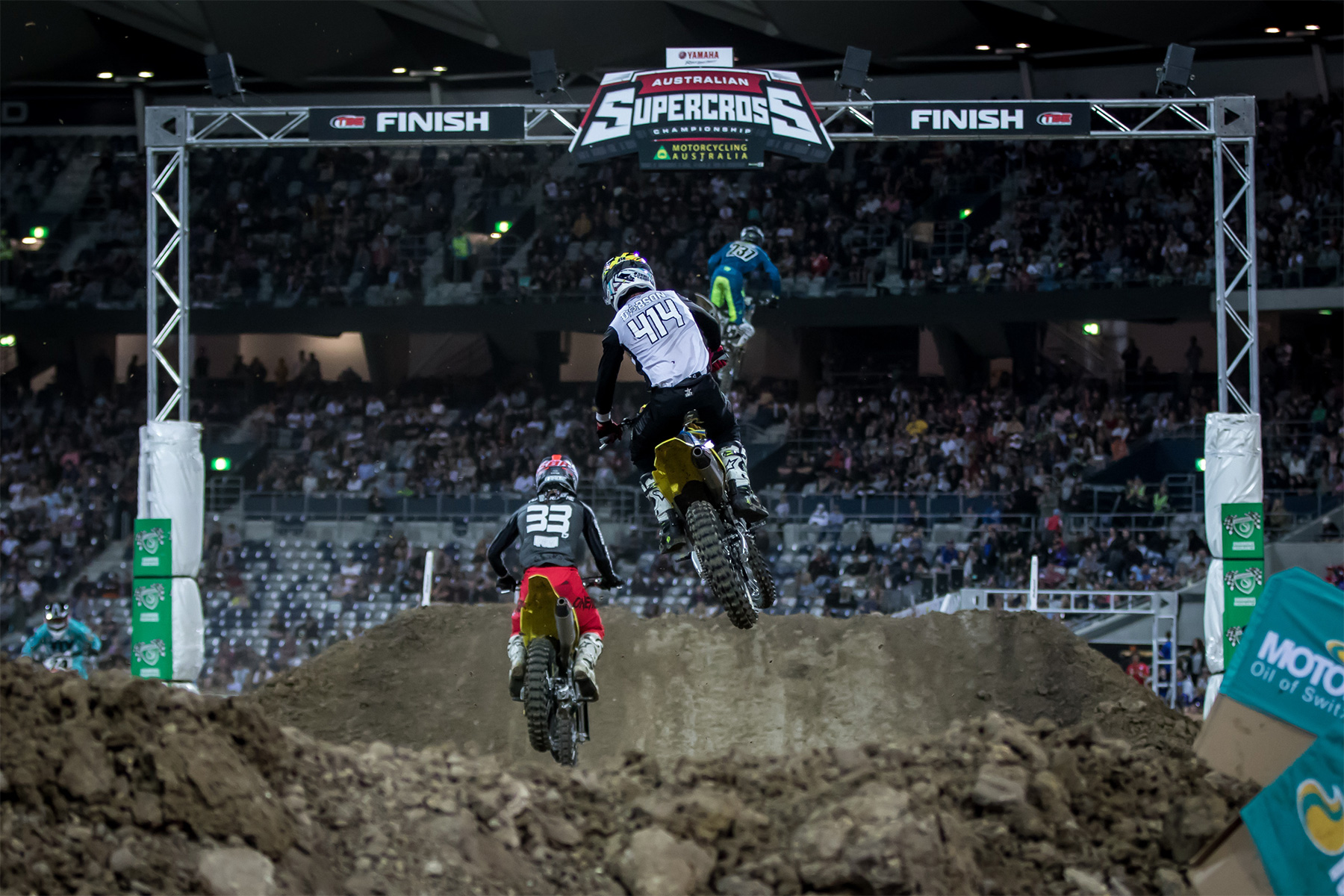