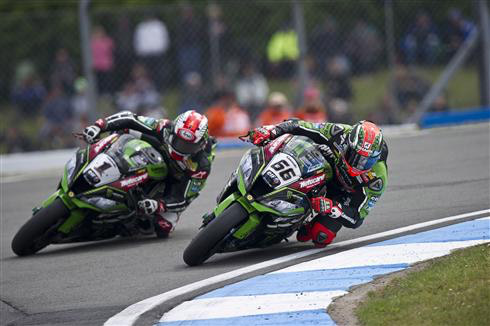 After the first half of the FIM Superbike World Championship season has provided great success for the Kawasaki Racing Team pairing of Jonathan Rea and Tom Sykes the second half begins with even greater optimism inside the KRT camp.

The recent record of Sykes and Rea at the Italian track located close to the Adriatic coast is enviable. Sykes and Rea split race wins between them for KRT last season, while Sykes scored a double win in 2014. The Misano circuit was also the scene of Rea‰Ûªs first ever WorldSBK race win, while riding for his previous team during the 2009 season.

Rea, the reigning world champion for KRT, has a career total of 34 wins and has scored a podium finish in every round so far in 2016. He has five race wins to his credit this year ‰ÛÒ more than any other single rider. Jonathan leads the current championship by 56 points from Tom after demonstrating an uncanny ability to take at least a top three finish when a race win has proved elusive.

‰ÛÏMisano is a circuit that I really enjoy and it has special memories for me because I won my first ever WorldSBK race there, and last year we were able to make a 1-2." Rea reflected. "I am also excited to race there because it seems like in the last rounds we have been doing a very good job. Although we did not get a race win at Donington I feel like I rode really strongly.

"We had a productive two-day test in Jerez after that in which we were able to test some things for the future but also confirmed that the direction we have been going in at Sepang and Donington with bike set-up seems to be the right way.

"I think we can be confident that we have found a good base with the 2016 Ninja ZX-10R. I am going to Misano to try to win both races because it has been a few rounds now since I have stood on the top step of the podium.‰Û