Kirk Gibbs will take the leaders Red Plate into Coolum 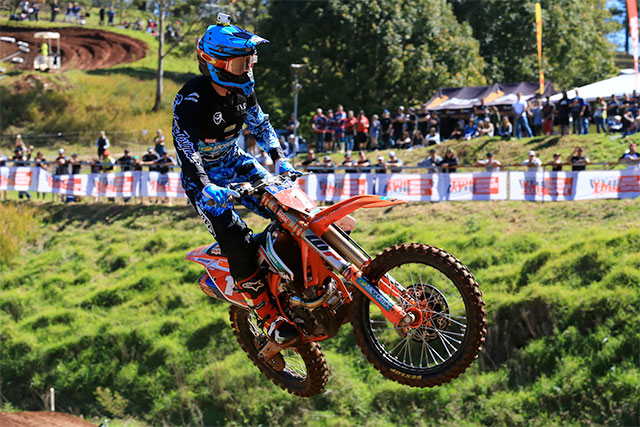 KTM Motocross Racing Team rider and defending MX Nationals Champion Kirk Gibbs will carry the red plate into next Sunday's series decider at Coolum following another consistent performance at the penultimate round of the series at Toowoomba's Echo Valley.

Gibbs has held the championship leader‰Ûªs plate since the fourth round of the series and maintained his custody of it after finishing with 3-2 moto scores earned third on the day behind Dean Ferris and Kyle Peters.

The KTM450SXF rider took second place points in the GoPro Super Pole behind American rider Kyle Peters, then looked set to challenge Peters for the lead in the first moto until a fall relegated him to third place behind Peters and Ferris.

In the second a perfectly-timed move and subsequent last lap pass over Peters provided Gibbs with an important second place behind Ferris ‰ÛÒ enough for him to take a six-point lead into the final.

‰ÛÏI felt like I rode pretty good all day, just having that lay down in that first moto just put a big dampener on things," Gibbs said.

"Dean (Ferris) made three points on us today, and without that crash it could have been a two or three point swing my way there instead. I definitely knew I had to make that pass on Kyle on the last lap, and it just worked out perfectly, I made that right-hander and then the left at the top of the track really well and just drove down the hill really hard and threw it up the inside.

"So we take the points lead into Coolum and we‰Ûªll put 120% in, and hopefully it's good enough, and if not, it's been an amazing championship, and I‰Ûªll still look forward to heading over to the Des Nations.‰Û 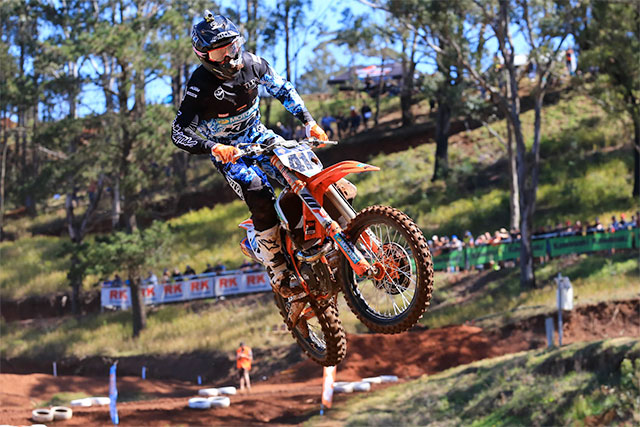 Jesse Dobson
Things strayed a long way from plan for Gibbs‰Ûª KTM team mate Jesse Dobson, who was knocked out in an awkward first moto fall and took no further part in proceedings.

Dobson will undergo consultation this week for injuries which include an injured wrist, but is hopeful of a full recovery and an appearance at his home round of Coolum next weekend.

‰ÛÏI don‰Ûªt remember much about today so this will be a short report," Dobson said. "It's a bit fuzzy but I remember being tight and struggling in qualifying, then in moto one I was riding good at the start, but I pumped up so bad and went backwards. I got passed by three guys and then saw the guy in front slow a little bit, so I decided to have another dig and then the show was over.

"Apparently when they stood me up I threw the crowd the horns and got a cheer, so that was good‰Û_ but I don‰Ûªt even remember walking into the Race Safe truck, so it must have been a decent hit.‰Û