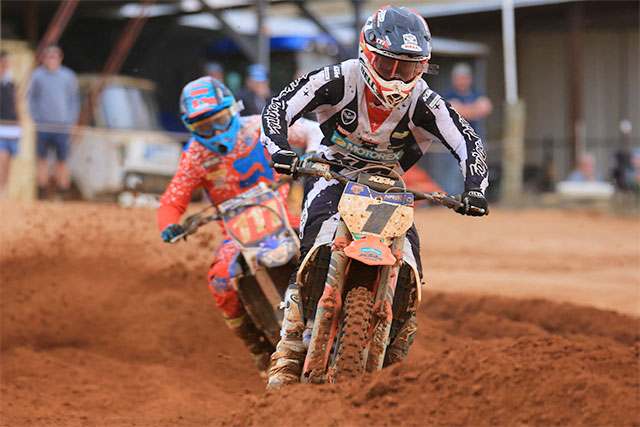 MX Nationals defending champion and KTM Motocross Racing Team rider Kirk Gibbs claimed the series red plate for the first time in a vintage season of Australian championship level racing when he claimed second in the fourth round of the series at Murray Bridge, SA.

The South Australian born racer was determined to make good at his ‰Û÷other‰Ûª home track, and after qualifying fastest and claiming a fourth place finish in a frenzied first moto, Gibbs bounced back to break through for his first race win of the championship in the second moto.

The win gave him second on the day, behind former GP racer Todd Waters and ahead of decorated international Brett Metcalfe.

Gibbs now takes the slimmest of championship leads into next week's round at Wanneroo, in an intensely-fought title race in which just five points separate the top three contenders.

"It was a bit four-seasons-in-one-day in South Australia, but it was good to be back and see everyone," Gibbs said, "I'm happy as much about getting a race win as anything. It was pretty tight racing, in race one I got up into second, but a few little wrong line choices cost me, and I slipped back to fourth, which was pretty frustrating because I feel that with room to breathe I could have done a lot better.

"In the second I just plugged away, passing Ferris and passing Brett for the win. It was good close racing for the fans all day but every time you get close enough to make a pass you get a mouthful of roost or dirty goggles, and without many jumps on the track it was hard to find a place to rip a tear-off. The red plate is good, but a point in front is very tight - I've just got to keep plugging away.‰Û