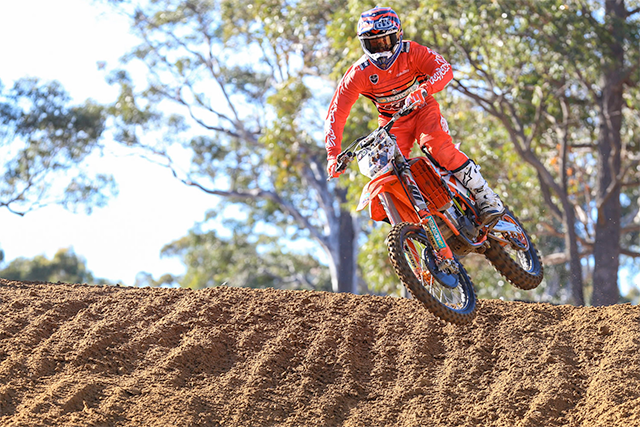 KTM Factory Motocross Racing Team rider Kirk Gibbs has strengthened his second place in Australia‰Ûªs premier motocross championship after he achieved his sixth straight overall podium in the sixth round of the 2017 Motul MX Nationals Series at Nowra, south-west of Sydney.

After a last-start race win in his birth-state of South Australia, Gibbs was hopeful of repeating the dose, however, perfect starts eluded him and he was forced to contend with traffic and roost in both motos, making his way to 3-4 moto finishes.

Gibbs and his KTM 450 SX-F are in fine form, however, and the 2015 Champion is confident that a round win will be coming his way sooner rather than later.

‰ÛÏThe first turn is tight here and it‰Ûªs really hard to pass, so, it makes life pretty difficult unless you holeshot both races," Gibbs explained. "I had a bit of a struggle today. I feel like I am riding really well, but I‰Ûªm frustrated with how it‰Ûªs going. I‰Ûªve been working on a lot of things and getting better and better, but the results were worse. 3-4 is not a bad result on paper, but I believe in myself and the team, and I believe that we should definitely be chasing wins every race.

"That second moto I took on a lot of roost battling with a few guys right at the end there, and ended up breaking a set of roll-offs with about 5 minutes to go ‰ÛÒ the string got stuck out. I believe that I‰Ûªm there and I‰Ûªm ready. It‰Ûªs so close I can feel it. I know the one weekend I get a bit of luck on my side, that I can put the whole thing together.‰Û 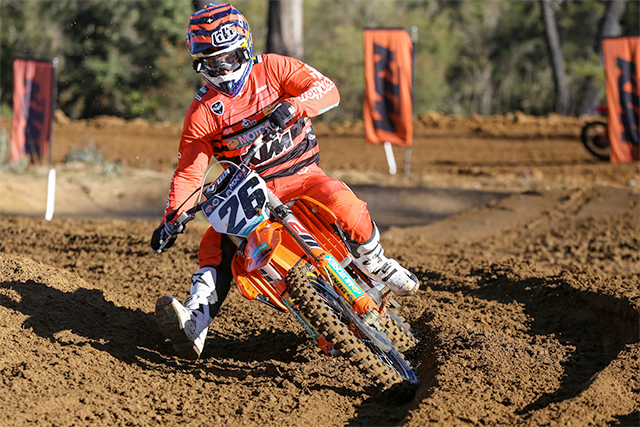 Luke Styke. Credit: MXN Images
The KTM factory team‰Ûªs second KTM 450 SX-F and its pilot Luke Styke were temporarily at the head of the opening moto of the day, however his blinding start was quickly undone when he was felled by another rider at the first turn.

Luke Styke laboured manfully to salvage an impressive sixth place in the opener, but could do no better than eighth in moto 2 for seventh on the day, however it was enough to see him climb from fifth to fourth in the championship standings.

‰ÛÏIt wasn‰Ûªt the best qualifying for me, I felt a bit stiff, but I got through that, kept my head high and pretty much got the holeshot but then someone just took me out," Styke said. "The bike was fairly damaged, but I still came from dead last to sixth in a solid ride. In the second moto I didn‰Ûªt get the start, I got stuck behind a rider that I couldn‰Ûªt pass and got onto his pace and it became a bit of a train ‰ÛÒ I couldn‰Ûªt‰Ûª really do anything. It was a pretty start-dominant racetrack here, but I was riding okay.

"I felt like I was really good in the first moto
we dug deep and got a good result. In the second, my level wasn‰Ûªt 100% and every time I pushed I felt a little bit sketchy. I felt like I was faster than the guys in front of me but I couldn‰Ûªt pass them, it was a bit disappointing, but I‰Ûªve just got to keep my head high and keep positive and the results will come," Styke concluded.