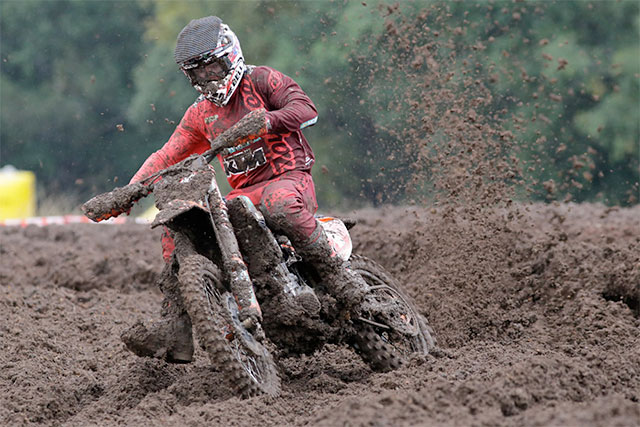 Despite a lack of recent training time following a knee injury sustained at the last round a fortnight ago, Gibbs was still able to make the best of severely muddy conditions which placed a premium on good starts, and finished the day with 4-2 results.

The result means the defending MX National Champion will retain the coveted red plate, and take a six-point championship lead into round eight in a fortnight's time.

Returned GP racers Dean Ferris and Todd Waters were first and second on the day.

‰ÛÏIt was up and down today. Third in SuperPole was okay, then in the first moto I didn't get the greatest start," Gibbs explained. "I got into fourth, and kept trying to make passes on (Kade) Mosig but every time we got into lappers the lapper would let him through and not me. I caught right back up and the same thing happened again, this lapper didn't see me and turned into me and took me down. It was really frustrating.

"The second race went a lot better, I was feeling good in second behind Ferris, and was just about to make a push when I had a little off. He got away by 10 seconds, and I chipped that back to four by the end but it was too late. I‰Ûªve lost a lot of points over the last two rounds, but all in all with the knee injury and not getting to ride much in the last two weeks, it‰Ûªs not a bad result, but I need to get back into those race wins.‰Û