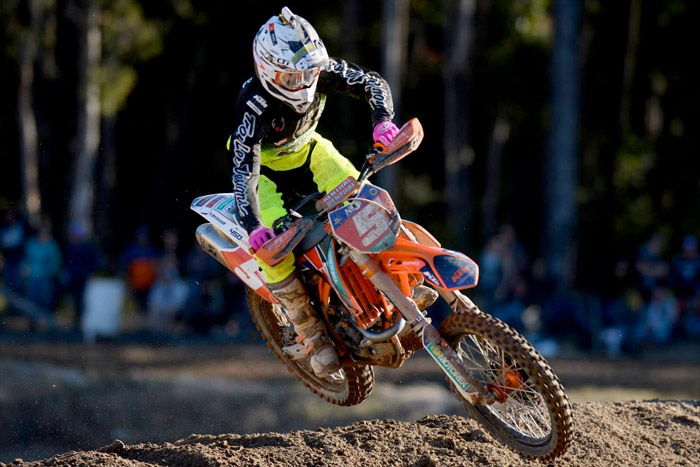 KTM Motocross Racing‰Ûªs Kirk Gibbs, has once again found himself on the top step of the MX1 podium, at round six of the MX Nationals held at Raymond Terrace, NSW on Sunday the 5th of July.

With Team Motul Suzuki‰Ûªs Matt Moss rumored to be back to winning form, all eyes were on the likes of Moss and Gibbs, who were set to treat the hundreds of spectators to a day of exciting racing!

In moto one, red plate holder KTM‰Ûªs Gibbs snatched the holeshot from Team Motul Suzuki‰Ûªs Moss by the narrowest of margins, however Moss having found his confidence once again, he applied the pressure and challenged for the race lead.

With Gibbs, Moss and CDR Yamaha‰Ûªs Dan Reardon then holding first, second, and third positions respectively, the trio stuck together for a good part of the moto before Reardon went down, which was followed by Moss claiming the race lead from Gibbs.

With a new race leader, the focus shifted to the fight for third place between Luke Styke (KTM) and CDR Yamaha‰Ûªs Kade Mosig. Despite Mosig pressuring Styke in the later stages of the moto, Styke proved he has what it takes to secure another podium finish - crossing the line in third behind teammate Gibbs, while Moss celebrated his returned form with the opening race win.

In race two of the day, KTM mounted Luke Styke launched off the start and claimed the holeshot ahead of Moss, however it was teammate Kirk Gibbs who became his biggest threat.

While Styke lead for a portion of the moto ahead of Moss and Reardon, Gibbs once again proved that he is a force to be reckoned with.

By the 20-minute mark, the top five riders being, Gibbs, Styke, Reardon, Monea and Moss were separated by nothing more than a few bike lengths, making the final moto the most thrilling of the day.

When the chequered flag flew, Gibbs crossed the line first ahead of teammate Styke, followed by Reardon, who held off the likes of Moss and Monea to claim third.

By the conclusion of the round, KTM once again took two positions on the podium, with Gibbs claiming the round six overall ahead of Team Motul Suzuki‰Ûªs Moss in second, and Styke who completed the podium in third.

‰ÛÏToday was a good day. It was actually awesome to have Matt back, and have that battle in the first race,‰Û