Kirk Gibbs looks back at 2017 FIM Motocross of Nations 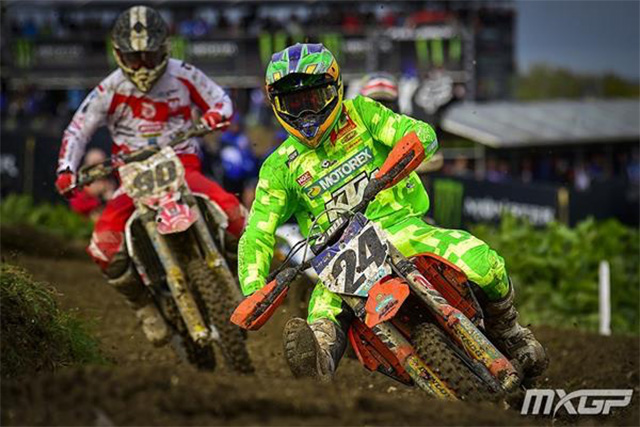 On debut in the prestigious international event as Australia's Open class entry alongside countrymen Dean Ferris (MXGP) and Hunter Lawrence (MX2), Gibbs guided his KTM 450 SX-F in a pivotal role assisting his country to sixth overall.

Gibbs, who recently finished runner-up in the MX Nationals MX1 championship, had KTM Australia‰Ûªs Rob Twyerould and race team mechanic Craig Bolton alongside him in the UK, pitted with KTM Factory Racing‰Ûªs official world championship team for the weekend.

Saturday was contested in clear conditions, when Gibbs set the 11th-fastest time in free practice, before excelling in his heat race to finish in fourth position. That result helped Australia qualify third overall for Sunday.

With rain moving in overnight and making for a mud-soaked affair across the trio of Nations motos, Gibbs continued to impress by establishing himself toward the front of the field in Race 2 (MX2 + Open), circulating inside the top three for the first half of the moto and ultimately crossing the line in fifth overall.

The 2015 MX Nationals MX1 champion was on track again for Race 3 (MXGP + Open) in the back-to-back race format, however Gibbs' gate selection wasn't ideal for his second encounter and he was buried in the back-half of the top 10 from the start.

A minor fall soon afterwards dropped him all the way to the rear of the 37-rider field and he completed lap one in 27th, before going on to work his way to 19th place by race's end. It was an inspired performance that resulted in sixth overall within the Open ranks and both of Gibbs' scores counted towards Team Australia's sixth-place result. 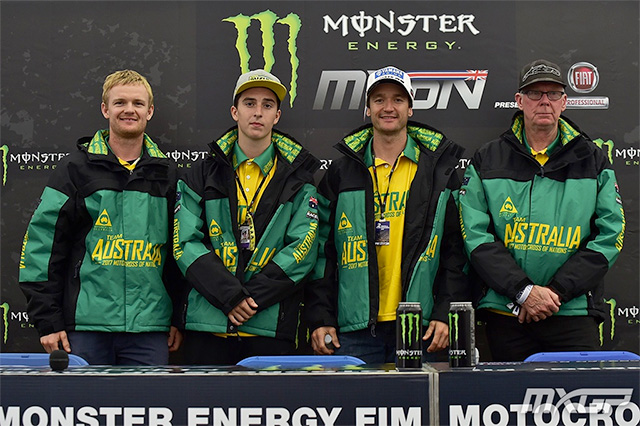 Credit: MXGP
"It was obviously something that I've wanted to do for a long time and it was all it was hyped up to be," Gibbs recalled.

"I loved every minute of it! The atmosphere was crazy and the track couldn't have been any better on Saturday, but there was a down-pour that night. The track was muddy on Sunday morning, the weather was misty and it rained all day, but it was still ride-able and still amazing.

"I'm really happy with the way I rode and although there were a couple of little things I could have done better, overall for my first Nations I'm really happy and hope to go again in the future. With a team similar to what we had or even the same three guys, I believe we have the potential to podium together.

"In moto one we gave Hunter the priority and he had the inside gate, so I had the 23rd pick, but luckily I was able to get inside the box. I pulled a ripper start, almost hole-shotted and rode my own race. I felt comfortable and had my goggles on for the majority of that race, but I got some water between my tear-offs about 20 minutes in. I didn't ride very good for about 10 minutes, which I was frustrated with because if I had a solid entire race I feel I could've finished third in that moto even though I regrouped from there.

It was all about Team Australia though, Hunter rode awesome and it was a great result for us. Once I finished I was pretty happy and I'm satisfied that I was able to put myself in a great track position. The second race wasn't so good, as I had 23rd pick of the gate again, got a decent start but had to go wider in the first turn from outside of the box otherwise I was going down. The roost in the mid-pack was gnarly and because the track was so sticky I got hammered really badly. From there, coming into a turn I went to pull a tear-off, but someone got sideways and clipped me as I had my hand off the bars, so I just tipped over even though I almost saved it.

"From there I was dead-last, which you can't afford to do against the best guys in the world and it makes for a hard moto. Anyway, I plugged away and got back up to 19th, so that was a little disappointing, but I knew I probably could have ran in the top 10. All in all though I'm happy and hopefully I get to go back and have another go in the future!" Gibbs concluded.