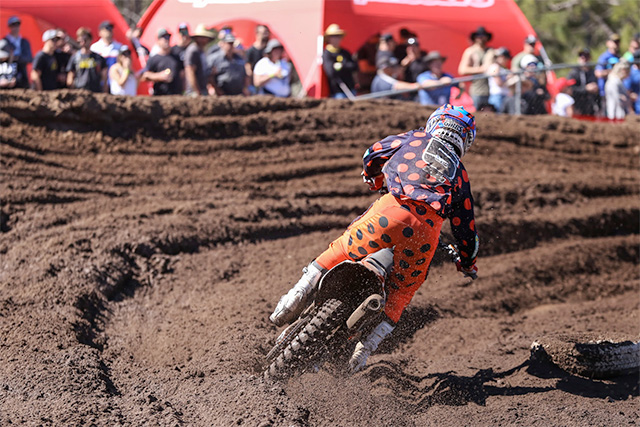 KTM Factory Motocross Racing Team rider Kirk Gibbs has rounded out the Motul MX Nationals MX1 championship runner-up for the second year running, after a characteristically gritty ride in the final round at Coolum.

Kirk Gibbs finished the round with 3-3 scores for third on the day, behind series Champion Dean Ferris, and Todd Waters.

Gibbs began the round in perfect style, winning SuperPole with a time a full second faster than the nearest rider, however as racing got underway he lost some drive on the concrete patch under the start gate and found himself seventh exiting turn one.

He took four laps to find his groove, then dug deep into the bag and rolled past opponent after opponent, taking second from Waters with two laps to go, only to fall and hand it back to his good friend with a lap remaining.

As the second moto began he fired his powerful KTM 450 SX-F to its third holeshot in four races, but feeling the effects of a draining first moto, he was twice overtaken and finished third.

‰ÛÏI was really happy to get my first SuperPole win of the year, but I spun up a little over the concrete in the first race though and had to fight my way through. It took me a little bit to get in my grove, but once I did I pushed to the front," Gibbs explained. "I made the pass on Todd but he was all over me trying to pass me back and I made a mistake and had a little lay down, which was disappointing. I‰Ûªd put a lot of effort into pushing through and was really cooked after that, so I struggled a little in that second moto and my back was a bit sore.

"We had a few ups and downs of various types this year, but we kept working as a team, trying to make ourselves better every week and towards the end we started putting ourselves into good positions, so hats off to the team. We were the only ones to steal a win off Dean this year, so it just goes to show we were still working really hard. 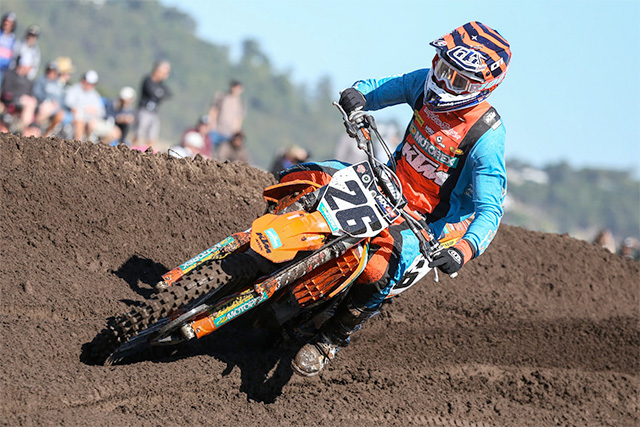 Despite battling injury early in the season Luke Styke managed 5th overall in the MX1 Championship. Credit: MXN Images
Gibbs' Luke Styke also had good pace at Coolum - qualified for only his third SuperPole of the year - but the back injury which flared up a week ago in Toowoomba again had the final say, and he could only limp to eighth in the first moto.

With limited movement, he bravely fronted for the final moto in an effort to preserve his fifth place in the championship, and was successful in doing so in what was his first season back after a 14-month layoff from an Achilles Tendon injury.

KTM Motocross Racing Team Manager, Jay Marmont, was happy with the teams ending to the season ‰ÛÏKirk won SuperPole today, for the first time this year. In the first moto though he had to work his way through from sixth to overtake Todd with a couple of laps to go, but he had a tip-over right at the end. In the second he got the holeshot, but I think he spent too much energy in that first race. I think third was pretty good since Coolum hasn‰Ûªt been the best venue for him in the past few years. He‰Ûªs ticked some boxes this year and has done really well in the final races. He‰Ûªs the only rider to beat Dean this year and he‰Ûªs definitely the second-best rider in Australia at the moment, so if he can come out on top next year that will be a great achievement for him.

"Luke struggled with the compressed disc in his back. We almost pulled him out of the second moto, but I didn‰Ûªt want him to lose that top-five position in the championship. He toughed it out, which was pretty gutsy, but needing a couple of weeks off going into supercross is very unfortunate. However, an injury is an injury, and taking care of the rider comes first," Marmont concluded.