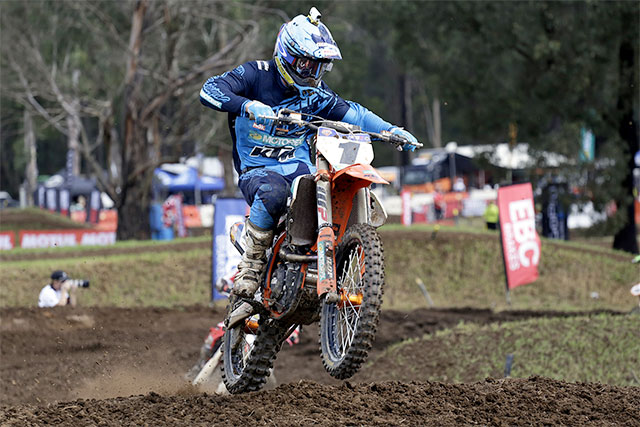 KTM Motocross Racing Team rider Kirk Gibbs continues to establish himself as one of the men to beat in this year‰Ûªs closely-fought Motul MX Nationals championship, following the weekend's second round at Appin.

Despite a couple of setbacks, the 2015 MX1 champion left the venue just two points away from the series lead after finishing the day fourth behind Dean Ferris, Brett Metcalfe and Todd Waters, following 2, 4 moto finishes.

Despite a serious late-season injury which wrecked his 2016 pre-season buildup, Gibbs has already proven himself one of the pace-setters across the two rounds thus far.

The Queensland-based South Australian qualified second fastest at Appin before finding the lead in both motos yesterday, only to have incident and accident intervene.

‰ÛÏFor a day that was full of mistakes it wasn't too bad but I expect a lot better," Gibbs said. "I had a little crash on my Go Pro Super Pole lap so I missed an opportunity for points there."

"First Moto I felt like I should have won the race, but Ferris decided to jump on me on the last lap and I have the tyre mark on my back and side to prove it. Luckily I didn't go down and was still able to get second.

"Second Moto I got myself into a good position early in third, but made two really big mistakes and let Todd past and Ferris got around me with two laps to go. Frustrating from my end, but I‰Ûªm still leaving healthy and right within range of the championship lead," Gibbs concluded.

Gibbs' team mate, nineteen-year-old Queenslander Jesse Dobson limped into the round with an injury to his leg and glute, and despite being by his own admission only at 60% capacity, attempted to glean points from the round.

After impressively qualifying 11th fastest, Dobson, without his usual level of control, stepped off his factory KTM 450 SX-F in the first moto, and the team decided he was better saved for another day, withdrawing Dobson from the second.

‰ÛÏI‰Ûªve got a pain in the arse," Joked Dobson, "I had a big crash this week and laid in bed a few days and rested, but something‰Ûªs out somewhere. I was in pain just walking before I even got to the race."

"As soon as I did my first practice lap I knew it was a case of just trying to get through the weekend ‰ÛÒ I had no leg strength and can‰Ûªt hold my leg up in the ruts. I tried my best today and that's all I could do - it‰Ûªs disappointing but we live to fight another day and it's all part of the process. We'll overcome it and come out stronger," he concluded.