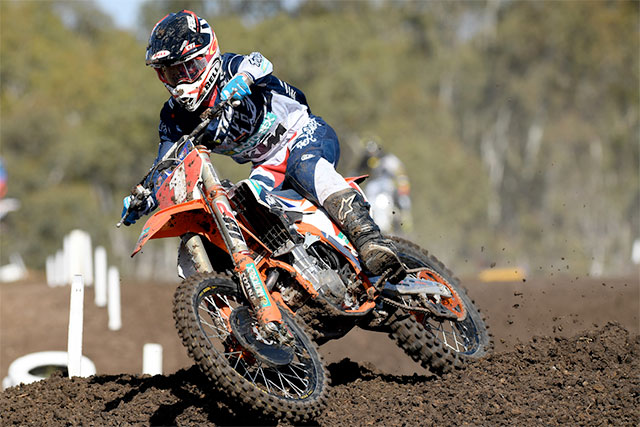 KTM Motocross Racing Team rider Kirk Gibbs has rebounded from last October's serious injury to begin his MX Nationals title defence with a share of the top points, as the sport‰Ûªs premier series kicked off today at Horsham in Victoria.

Overlooked slightly in the pre-series hype before what is expected to be one of the most competitive MX Nationals seasons ever, the number one plate holder proved that the class and work ethic of a champion will take a rider a long way, even when the chips are down.

Gibbs burst out of the blocks setting the fastest qualifying time, but a mistake in SuperPole dropped him to third pick of the grid, before he went on to take two second-place finishes, the first behind Dean Ferris, and the second to Matt Moss, who claimed the day‰Ûªs overall victory.

‰ÛÏI surprised myself to tell you the truth, I didn't think I was actually going to be that competitive," a suprised Gibbs said.

"I‰Ûªm really happy. My starts weren‰Ûªt too bad but I feel like I can get them better, and I wasn't strong for the whole 30 minutes in that first moto. In the second I didn't get through my first couple of laps the cleanest and got passed by a couple of people, but it's all a work in progress.

"There‰Ûªs probably five or six guys that are really on pace at the moment, so I feel like it‰Ûªs going to be a great year. Maybe there were first round jitters for a couple of people, so it worked out better for some than it did for others. I‰Ûªm just happy to come away tied for the lead.‰Û 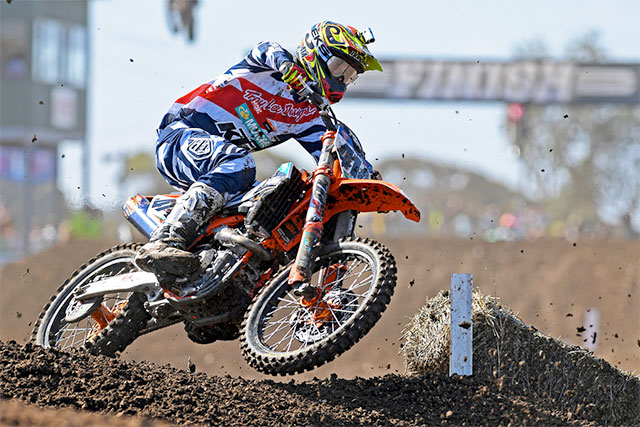 Jesse Dobson was drafted in for the injured Luke Styke and acquitted himself well with a top ten finish. Photo: Jeff Crow
Nineteen-year-old Queenslander Jesse Dobson made a good fist of his whirlwind promotion to the KTM factory team to replace injured MX1 rider Luke Styke, coming away with a top-10 finish despite having just three decent acclimatisation rides before the series kickoff.

Despite a couple of falls during the day, Dobson walked away with tenth and eighth place finishes to lay an impressively consistent platform for his year, despite the very barest of preparation time on the mighty KTM 450 SX-F.

‰ÛÏOn paper my day doesn't look that great but with the circumstances we had with the late call up and a couple of crashes I had from putting myself in bad situations, I was right in the mix," DObson said. "I just need to get a good start.

"We‰Ûªre all so close out there at the moment that if I put myself in a good place, it will be sweet and I‰Ûªll be right up the front pushing for that podium. I wasn't happy with the result today but I was happy with the fact that, in a short amount of time we were able to show the speed and fitness to be up front and be a top guy.

I get on with the team really well - I have since Supercross. Everything falls into place like clockwork; they really know what they're doing. It makes it a lot easier myself and I can't thank the whole team enough for that.‰Û