Kirk Gibbs Happy With Round Win, But Still Chasing Maiden Moto Victory Of 2016 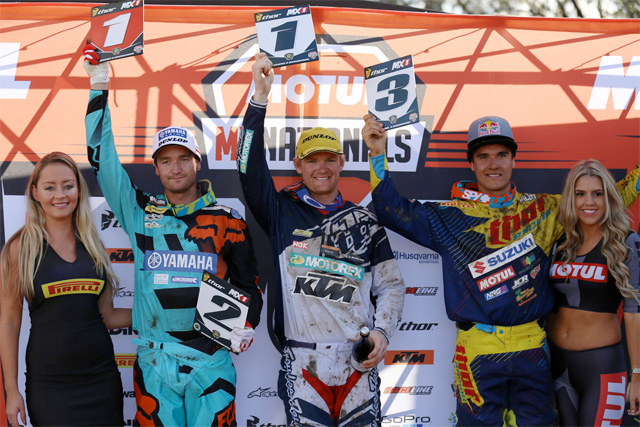 The KTM Motocross Racing Team‰Ûªs defending MX Nationals number one Kirk Gibbs showed just why his reputation as a championship-winner is growing during the toughest and most competitive Nats season in recent years.

Gibbs proved his title-winning mettle once again at this weekend's continuation of the MX Nationals championship at Broadford, winning the overall victory ahead of returned Grand Prix racers Dean Ferris and Todd Waters, in the most atrocious conditions seen in the series in three years.

Gibbs likened the quagmire faced by MX1 competitors in the first moto to conditions seen at the same track back during his rookie year in the premier class in 2013.

While Waters and Ferris split the wins, it was Gibbs‰Ûª pair of second placings which earned the overall victory, and moved the Queensland-based South Australian to within one point of the lead in Australia's most important motocross championship.

So poor were the conditions after unexpectedly heavy rain this morning that race organisers and team management decided to cancel qualifying, opting instead to use the championship standings of the time for grid selection.

‰ÛÏThe track was pretty tough and though it wasn't too physical, it was pretty technical - you had to really be onto it." Gibbs refelected. "You also had to get good starts and put yourself in really good positions, and I felt like I did that.

"My second start wasn't quite as good, but I felt like I rode pretty solid and hit my marks. My first year in 2013, the track was pretty similar, it was just having that rain overnight. It got really one line-ish, which makes it really hard to pass.

"I'm glad to come away from there with relatively good results and points. I'm still chasing that first race win, but obviously I'll take an overall! I'm trying to be really consistent and battle with the top guys every weekend, because they are going to do the same, I just want to be there every moto, and I've been able to do that so far.‰Û