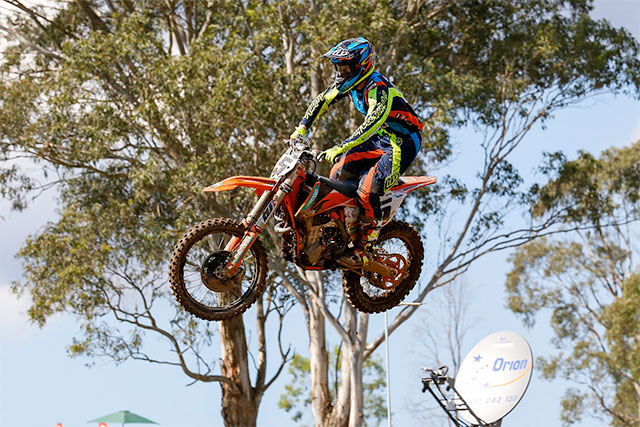 KTM Motocross Racing Team rider Kirk Gibbs proved both his speed and his trademark resilience are at an all-time high as the 2017 Motul MX Nationals series continued yesterday at Appin.

Gibbs powered his KTM 450 SX-F to a resounding victory in the first race, but his hopes of converting that into his first round win went down when he was caught in a three rider start-line pileup.

Ever the warrior however, Gibbs got going and chipped away at the field, passing every rider barring Todd Waters and Dean Ferris to be third. Unfortunately he was felled by a lapper with two laps to go, and finished sixth.

The epic, and typically gritty ride nonetheless gave Gibbs second on the day behind Dean Ferris and ahead of Todd Waters, and elevated the 2015 MX Nationals Champion to second in the championship.

"I didn‰Ûªt feel like I rode very well at the first round, so to come here and ride well was great," Gibbs said. "I‰Ûªm happy with my speed, but that second race was just tough. Anything that could go wrong did. I did a lot of damage control, and then gave it away at the end. I know it‰Ûªs only round two but to give someone of Dean‰Ûªs calibre that sort of a points lead this early makes it tough.

"I have a lot of confidence in myself and I knew what to work on after last round so to get a race win is awesome. I‰Ûªll never give up in a race and obviously that shows, but it is frustrating when you‰Ûªve earned a good position and then you lose it in the last two laps.‰Û 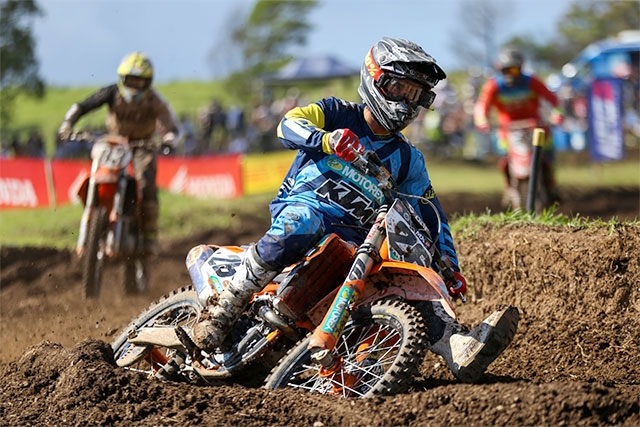 Luke Styke landed on the podium in a tricky second moto. Credit: MXN Images
Gibbs' team-mate Luke Styke battled unsuccessfully in race one to find the feel he needs to fire the afterburners, finishing eighth, but bounced back to an impressive podium in the second.

"In practice and qualifying I struggled a little bit with my set up and I wasn‰Ûªt feeling it in the conditions," Styke explained. "For moto one we made some minor changes which made it a little more confidence but for moto two we made more drastic changes to help with the tricky track conditions.

"It rained while we were on the sight lap and continued to rain through the moto which made it really technical, but with the changes we made and my Dunlop tyres I was able to get my first podium of the year. I‰Ûªm not satisfied overall with the result but it's steps in the right direction and I feel as a team we are moving forward.‰Û