Kirk Gibbs Feeling at Home at ASX Round Three 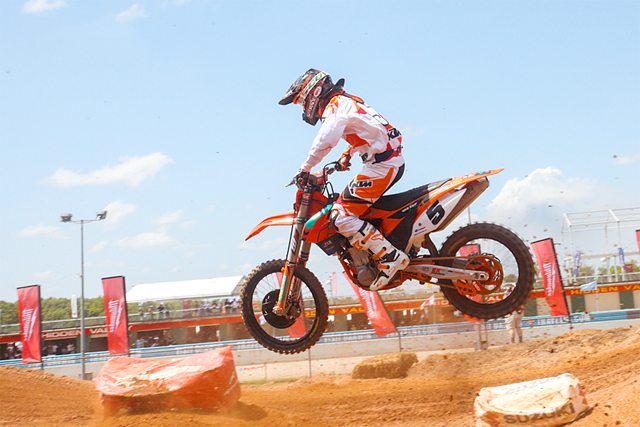 Motorex KTM rider Kirk Gibbs will be keen to show his Mt. Gambier friends and relatives the rider that Aussie motocross fans have come to admire when the Australian Supercross Championship resumes on Saturday in South Australia.

Gibbs has already made his rookie season in the MX1 category something of a spectacular one, winning an MX Nationals race, taking a number of podiums and achieving his season goal of a top-five series finish in the Monster Energy MX Nationals.

Now returning to the town in which he grew up, Gibbs and Motorex KTM team mate Daniel McCoy will look to improve on the fifth and sixth places they took away from last month‰Ûªs supercross series opener in Darwin.

Gibbs led the final race in Darwin for a full five laps before an uncharacteristic error saw him fall and slip to fourth on the Sunday night.

‰ÛÏIt‰Ûªs an awesome thing to be here." Gibbs comented on his return home "I never really thought we‰Ûªd have an Aussie title event in Mt. Gambier and there‰Ûªll be a lot of friends, family and supporters so it should be real good.

I got a ride on some of the track yesterday for the local paper and got a good look at it. It‰Ûªs pretty good, I think will be a tough night, maybe a bit one-linish and it might break down a little like Darwin did but we‰Ûªre used to that now so bring it on I say, it should be good.‰Û